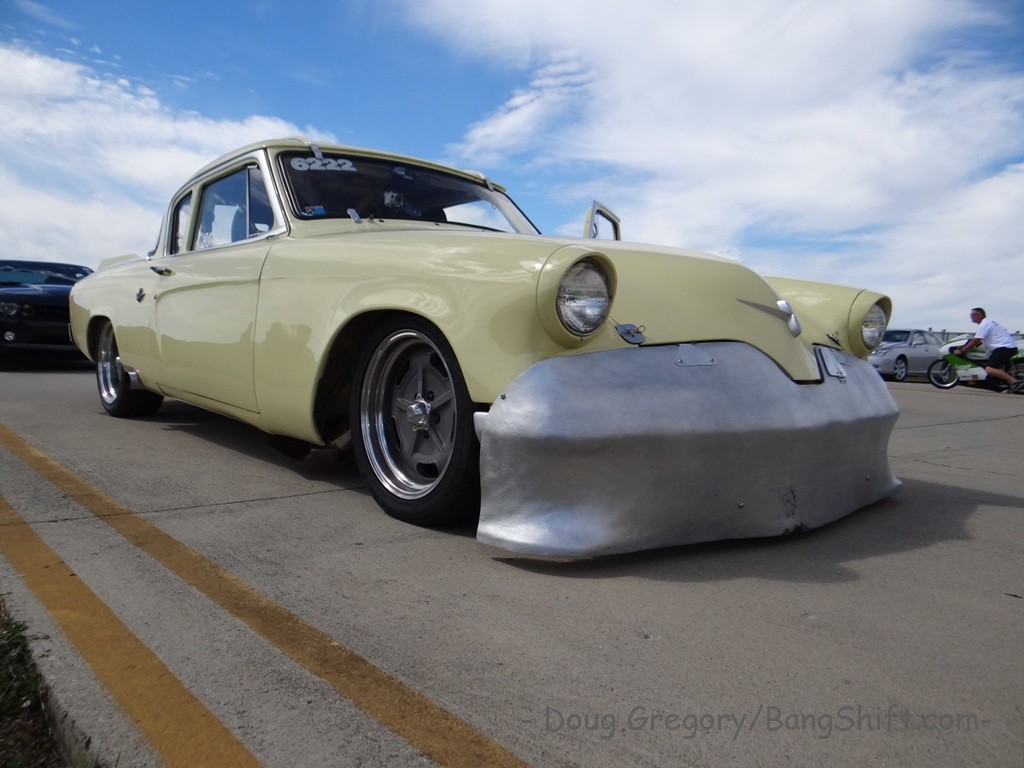 (Words and photos by Doug Gregory) – Oh my….what an event!!!  Records seemed to be falling like raindrops on this nearly-perfect fall day.  We showed up a bit late after working a couple issues with the car.  This was to be the furthest we’d driven it, one-way, since the previous summer.  I replaced the pan gasket the night before and while getting things ready this morning I found a couple bolts missing.  We’d been driving the car so much this summer and into fall I hadn’t done my regular nut&bolt check in a good while.  Once I replaced the two missing bolts I went around and tightened stuff up and there were plenty of things that needed at least a quarter-turn.  That done my 14yr-old son (Taylor) and I headed for the highway.  The trip was mainly uneventful except for seeing a sweet C10 we’d taken pictures of and been in awe since the NSRA Nationals back in August.  Its one of the few LS-swapped vehicles I really like.  We hope to shoot a bunch of pictures soon and get the details to pass along in a feature article.

I digress.  We could see right when we drove in the event was well-attended with the staging lanes looking full of all manner of machines.  Once parked we set out with cameras clicking while wandering up through the rides awaiting their turn at the track, maybe a personal best, or even perhaps a new record.  Again I marvel at the diversity of people, backgrounds, types of vehicles and their individual approaches to making speed.  Its what I believe drag racing once was and still is if you look for it.

The guy running things inside the food trailer said he runs chump car stuff and we talked to him for a good bit.  See, I like the people side of all this stuff.  Its so much better to hear the story behind the car and the efforts/history that put them here today.  He asked me what I thought was the most-interesting thing I seen today.  Hmmm.  Well it would have to be this streamliner that hadn’t even made a pass.  It hurt some gears and they were scrambling to get it all back together so they could make a run.  The power plant and drive system are some of the wildest things I’ve ever seen.  The motor was a 16-port, twin-cam-headed, fuel-injected  Ford 2.3 backed by a transaxle.  The transaxle had two axle stubs coming out that fitted big cogged belt drive pulleys (think blower drive) that in turn spun two axle stuff with similar pulleys affixed and the rear wheels attached to that,.  There is no differential.  Inboard discs on this rear axle-stub drive system.  It all seems so very complicated and yet off-the-scale cool.  Lots of other neat stuff there, but this one definitely topped my ‘interesting’ meter.

There are so many cars to cover it seems like I could go on for pages (and believe me – I CAN do that), but the folks who run BangShift might not let me take up pages and pages to describe EVERYTHING.  Still, I’ll hit a couple more just for fun.

There’s the pale-yellow Stude sporting a  massive turbo and an LS under the hood.  This fella comes in, pull the mirrors off, bolts a Kirkey set in, attaches an air dam, plugs in the chute then runs TWO HUNDRED and SIX miles an hour…..!!!  That’s 206mph in a car that after this process was reversed left the facility pulling its own utility trailer…!!!  That’s tuff stuff right there folks.

One of the highlights of most people’s day was likely rooting for the steam-powered motorcycle.  Yes, I said S-T-E-A-M.  The driver is a boiler-maker by trade and setup a 2-cylinder, heated by kerosene steam-powered rocket ship.  We heard that the record for a steam motor cycle was likely the longest unbroken record in all of land-speed racing.  True or not, most of us thought that pretty likely and hoped to see something good out it.  On the first run we witnessed the announcer (That would be Brian) said the driver was hoping for 50mph just to shake things out.  He crossed the line at 71mph which was about 30mph over the standing record.  Not content with that we caught him in the pits changing gears for even more speed out of the 600psi boiler.  On his next pass it seemed for the first 1/3rd of the track it wasn’t going to happen.  That gear change really sucked some of the juice out of it to get rolling.  However, around half-track it started picking up – well – steam.  By ¾ track the thing was really chugging and by the end of the course it looked to be really hauling.  The result – 80mph from little more than a giant pot of boiling water on two wheels.  How cool it that.?

In this first gallery I have a handful of the pictures my son Taylor took.  He needs to shoot more because he can often times out-shoot me.  As for my action shots….I was planning to depend on my tripod to help, but I couldn’t find the camera shoe so I had to just hold the big lens and hope, but seemingly couldn’t keep it steady.

More than likely my pictures will be in two galleries so I’ll spend a bit of time talking about those pictures ahead of the 2nd installment.  Enjoy. 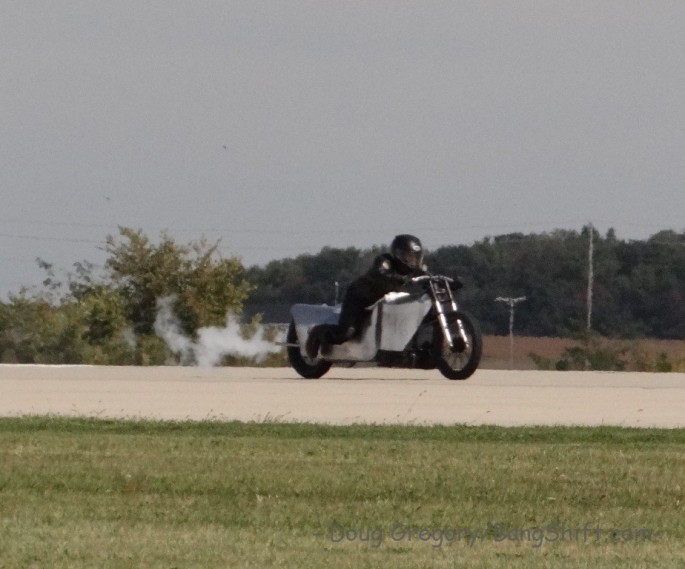 Remember The Sand Dragging Paddle Tire Fox Mustang? Turns Out That Thing Is An Asphalt Killer As Well! Drag Week Uncensored Part 5: What It’s Really Like To Drive A 6 Second S10 Cross Country!