The Salt Beds Of Salduro: The History Of The First Speed Trials At Bonneville

(By Bret Kepner – SCTA Official and member of the Society Of Land Speed Historians) –  (Editor’s note:  We’re going to run there entire series of the Salt Beds of Salduro this year because the story is amazing. When you seee how Bonneville became the mecca of speed that it is now, you’ll be amazed that it ever happened in the first place. Turn of the century (into the 1900s) America was a strange, wonderful, and occasionally scary place where things were definitely not always what they seemed and in many cases he who could shout loudest won. You’ll see what that means as the story progresses. For now, sit back, relax, and learn the hows, whys and whos of Bonneville’s earliest days as a race track. This is the Salt Beds of Salduro) –

“In 1914, Teddy Tetzlaff set a world speed record on the Bonneville Salt Flats in Utah”.

While it is the singular sentence used in most historical references to speed competition on the great white expanse which has captured the attention of the world for one hundred years, it does nothing to clarify or accurately recount the birth of Land Speed Racing near Wendover, Utah. Of the thousands of fans and hundreds of competitors who will gather for the 2014  centennial celebration, few know the real story of the first speed trials on what is now regarded as hallowed ground.

To the north of the race courses on the salt is the Silver Island mountain range in which several peaks are named for individuals forever associated with Land Speed Racing at Bonneville. From east to west, the named peaks are Cobb, (for John Rhodes Cobb who set records of 367.91 miles per hour in 1939 and 394.19 mph in 1947; 7,021 feet), Graham, (for Athol Graham, fatally injured in an August, 1960, crash after clocking 344.761 in 1959; 7,563 feet), Campbell, (for Malcolm Campbell who set nine Land Speed Records between 1924 and 1935 with a best of 301.13 mph and whose son, Donald Malcolm Campbell, was also a record holder at 403.10 mph in 1964 but set his record in Australia; 7,272 feet), Jenkins, (for David Abbott “Ab” Jenkins who set dozens of speed and endurance records between 1926 and 1956, several of which still stand; 7,268 feet), Lamus, (for Nelson Edward Lamus who helped build the original paved road across the salt, paralleling the railroad tracks, and who, with his son, Blair Barnard Lamus, prepared the salt race course for Land Speed attempts between 1925 and 1955; 6,284 feet), Tetzlaff, (for Theodore Herbert “Terrible Teddy” Tetzlaff who is often credited with the first Land Speed Record set at Bonneville in 1914 at 142.857 mph; 6,267 feet), and Rishel, (for William D. “Big Bill” Rishel who first crossed the salt flats on a bicycle in 1896, tested the salt in an automobile in 1907 and envisioned the area as a speed course; 6,212 feet).

In the first decade of the twentieth century, automobile racing gained phenomenal popularity. In the same fashion by which trains became the featured attraction fifty years earlier and as airplanes would captivate the world a decade later, the automobile was the focal point of mechanical attention. Massive crowds attended the hundreds of auto racing events held around the world, (most conducted on public roads or on dirt-covered horse racing ovals), to watch daredevils attempt to control the earliest vehicles at breathtaking and ever-increasing speeds. Motorsport entrepreneur Ernest A. “Ernie” Moross was one of the most successful promoters within the new sport. Bicycle racing, which originated in France, became one of America’s most popular sports in the 1890s. Moross pedaled his way to stardom on wooden-track velodromes in events which paid as much as $5,000 to win, (over $140,000 in current value), and earned such stature within the sport he was paid large appearance fees for exhibitions and bicycle speed record attempts. By the end of the century, Moross amassed a sizeable income which financed his entry into the automobile racing circuit in 1903.

As a native of Michigan, Ernie Moross already enjoyed a relationship with one of the earliest auto racing superstars, Berna Eli “Barney” Oldfield. The two Detroit residents often competed against each other in velodrome events when Oldfield was the star rider for Dauntless bicycles while Moross rode for Stearns. Oldfield’s introduction to motorsports came through automotive pioneer Henry Ford in whose mechanical exploits Moross made large financial investments one year earlier. When Ford contemplated a driver for his 999 racing machine in 1902, Moross and Tom Cooper, (a former bicycling champion who also drove Ford’s Arrow race car), tabbed Oldfield who was then based in Salt Lake City (UT). Oldfield accepted and drove Ford’s seventy horsepower, 1,155-cubic inch four-cylinder 999 racer, (and its later twin, the Red Devil), to instant national fame.

By October of 1902, Oldfield and Cooper bought the 999 and the Arrow from Ford and campaigned them into the following season. At the Indianapolis (IN) State Fairgrounds on June 20, 1903, Oldfield became the first driver to average more than sixty miles per hour, (60.402 mph), on a one-mile racetrack. The feat of driving an automobile at the rate of more than one mile per minute was hailed as one of the great achievements of mankind and, globally, gave Oldfield almost God-like status. Racing at Empire City horse racing track in Yonkers (NY), (often noted as the first auto racing “superspeedway”), on July 22, Oldfield raised the one-mile record to 65.454 mph. Only a month later, Moross bought Oldfield’s racing contract from manager Glenn B. Stuart and put Oldfield behind the wheel of the even more powerful Winton Bullet No. 2. The car utilized what is considered by many to be the first eight-cylinder automobile engine. In reality, the Bullet No. 2 used two four-cylinder engines connected by a shaft to produce roughly eighty horsepower from a total of 942 cubic inches. In the team’s first two weeks together, Oldfield set more records while barely surviving his first serious crash, (on September 9 at Grosse Point, Michigan), in which a spectator died after being struck while running in front of the car. The incident so unnerved Oldfield he made public his decision to quit the sport after the James Gordon Bennett Cup road race, the era’s largest and most prestigious motoring event, in Homburg, Germany, in June, 1904. At the Bennett Cup, Oldfield shocked the world by refusing to sign a release absolving the race’s sanctioning body of any responsibility for crashes or injuries. This left the race without an American entry and the incident outraged Alexander Winton who immediately severed ties with Oldfield.

However, Barney’s already nearly incomprehensible popularity only grew while under the management of Moross and forced Oldfield to remain active. Immediately after Winton left the team, Moross continued the national tour for Oldfield while announcing a new sponsorship from the Peerless Motor Company of Cleveland, Ohio, with Barney at the helm of the infamous Peerless Green Dragon powered by a sixty-horsepower, four-cylinder, overhead-valve engine displacing 673 cubic inches. Simultaneously, Moross expanded his racing team to include several other drivers under contract driving a variety of automobiles.

While Peerless extolled each performance with advertisements in every periodical, Moross was able to charge $2500 per appearance for Oldfield in pursuit of more speed records and race wins. For the next three seasons, Moross and his promotional manager, William “Will” Pickens, accompanied Oldfield and the other team drivers to hundreds of events while Peerless constructed more powerful machines leading up to a 90hp Green Dragon.

Peerless, (which also produced Packards and Pierce-Arrows), declined to renew its sponsorship at the end of 1906 and Moross struck deals with the Winton Motor Carriage Company, (1907 and 1908), Mercedes, (1909), and Stearns Auto Cars, (1910). In the spring of 1909, however, Moross accepted the position of Director of Events, (for a hefty salary and a large percentage of the profits), at a new, purpose-built auto racing facility being constructed by Carl G. Fisher to be named Indianapolis Motor Speedway.

Coming In Chapter II: The Opening of the Speedway, the Gold Brick Scandal and the Debut of the Benz

(….and we’re off. Scroll down for some video of Barney Oldfield in action and stay tuned for installment two of about a dozen late this week!) 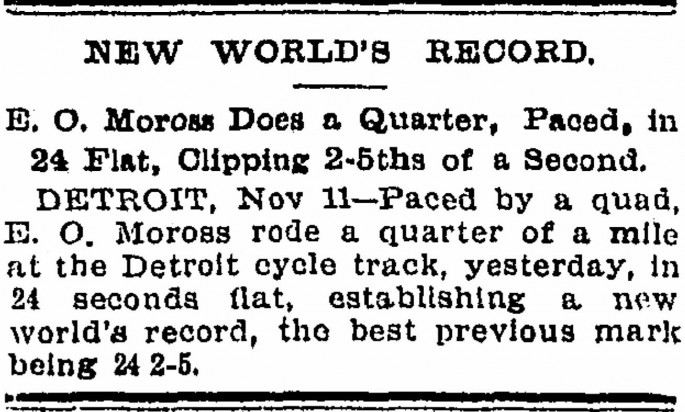 One of the many bicycle speed records set by young Ernie Moross was this quarter-mile in twenty-four seconds achieved in Detroit in November, 1897. 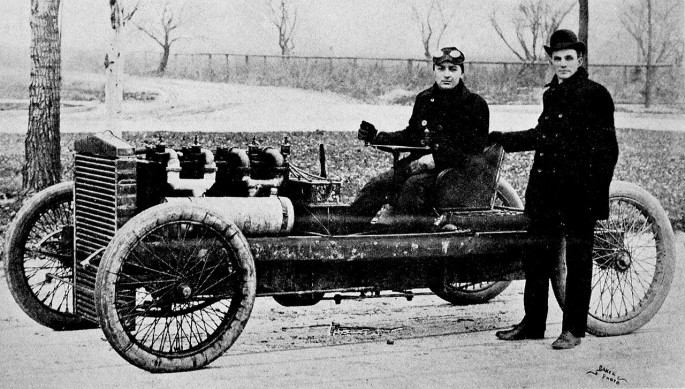 One of thousands of newspaper headlines heralding what many believe to be Oldfield’s greatest accomplishment, is “mile-a-minute” barrier-breaking performance in the “Red Devil” at the Indianapolis Fairgrounds on June 20, 1903. 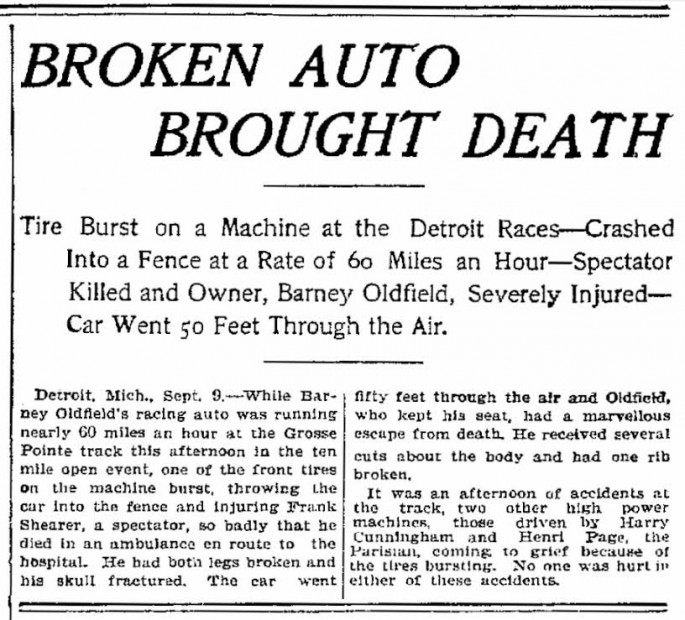 6 thoughts on “The Salt Beds Of Salduro: The History Of The First Speed Trials At Bonneville”