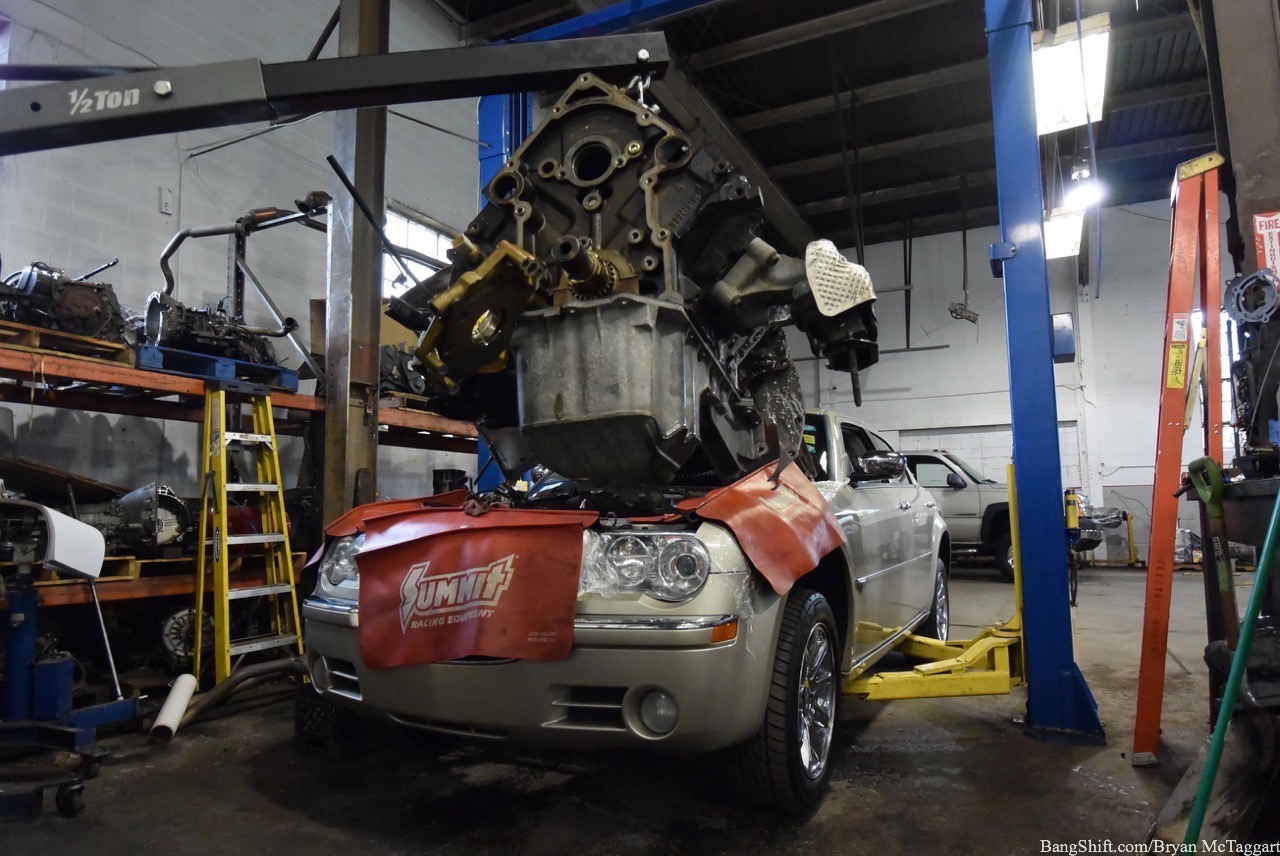 The deed is done. After 124,400 miles of faithful service in mostly stock form, Angry Grandpa, our in-house 2006 Chrysler 300C project car, has finally moved on to a higher level. I wasn’t kidding when I said I was sick of dinking around in the hope of trying to get a 13-second timeslip…and after having driven a 300 SRT-8 early on in the year as a kind of refresher, I realized that the whole car still felt too soft and elder-friendly for my taste. I might not be able to do anything about the Linen Gold color, but we can give Grandpa a whole new attitude.

And we did…rather, being honest, Erik at BFNY Performance in Cleveland, Ohio did. I just helped with the labor and took notes and photos. From about ten in the morning on Monday to just after six in the evening on Tuesday, in the kind of garage that we could call home in a matter of seconds, we stripped the 5.7 Hemi down to a block, pulled the engine, swapped the camshafts, cylinder heads, exhaust manifolds, thermostats, catalytic converters, lifters and yokes, pushrods, torque converters, the rear center section and drive axles, half of the driveshaft, and slapped it all back together, plus created tuning sets, making dyno runs and performing street tests. And as a testament to Erik’s knowledge of modern Mopars, that ALL was done with us leaving the shop around six both evenings…no late-night thrashes on this build. If we had gone fully mental, it might have been a 24-hour build (minus the driveshaft, which we will explain). But words only tell so much, so from the moment we started ripping into the car until we finished the last dyno pull, here we go: 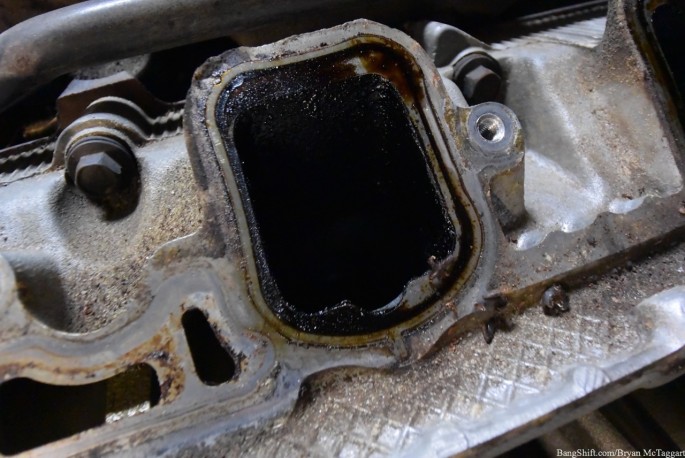 Most of the upper end of the engine is simple take-off and reinstall, so we will go to the first note. That black pit is one of the intake ports on the stock head. Note the oil buildup…that’s a prevalent theme as we tore the engine down. 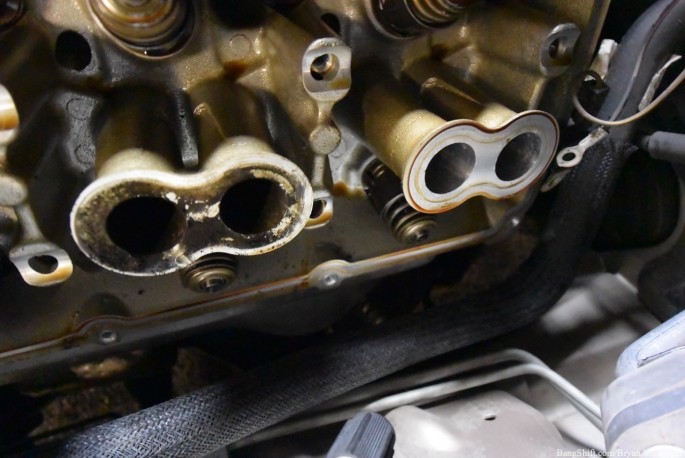 You might have seen me mention a “lifter tick” in any of the last few AG updates. Here’s the answer: #5’s spark plugs were hand-loose, which explains the carbon deposits at the tops of the tubes. No.7’s tubes look like the other cylinders: nice and clean. How did I not pick this up? Even Erik thought the “tick” was an exhaust leak. That would’ve gotten the 13-second slip there, most likely! 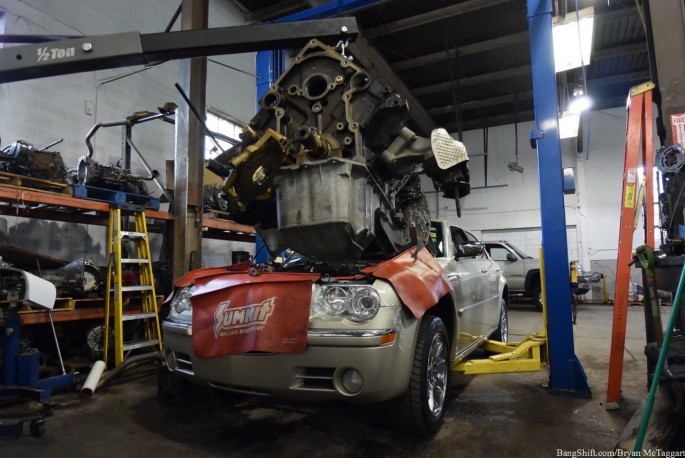 The 5.7, removed from it’s safe place. We removed it from above, without removing the hood, leaving the trans in the car. Within the day, we had it out, cam swapped, and back in the car with the heads set in place. On my own, I’d might be hooking up the engine hoist by now. I asked Erik to spill his secrets. The look he shot back indicated he would not do so. 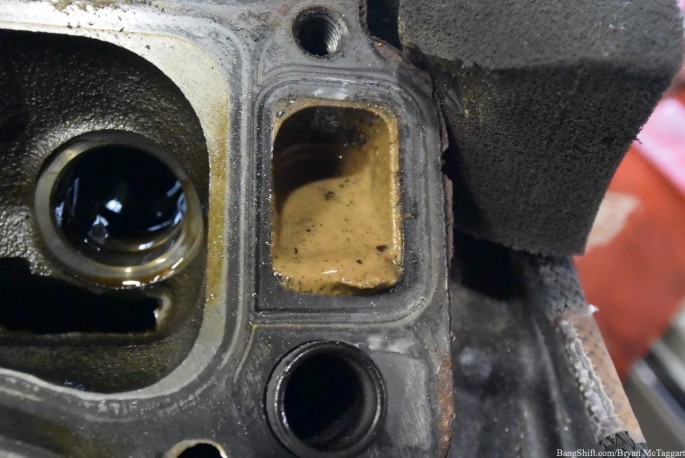 Ah, the mystery sludge. In the water jackets at the rear of the engine you could find this solution. These are “dead ports”…low-to-no flow water jackets, and the mixture is nothing more than the sediment left by HOAT coolants, the kind that Chrysler calls for. 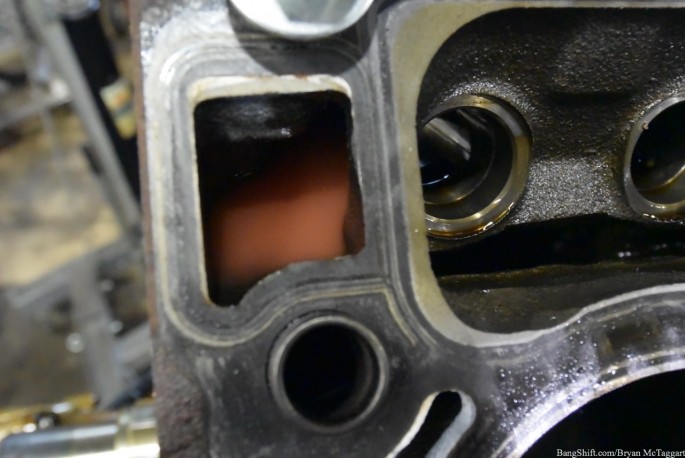 By comparison, this is what the coolant is supposed to look like: light pink. For this swap, we went through two gallons of HOAT coolant. The system contains 13 quarts, most of which is actually in the engine block. We drained most of it out using the coolant drain plugs on either side of the block. 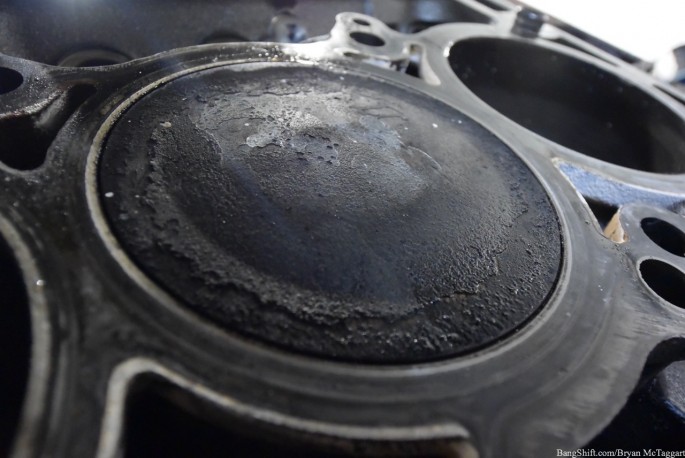 We’ve seen this before, on the Mirada-Imperial’s 323ci mill: an engine eating it’s own oil. This is why running a catch can on your ride is a good idea. 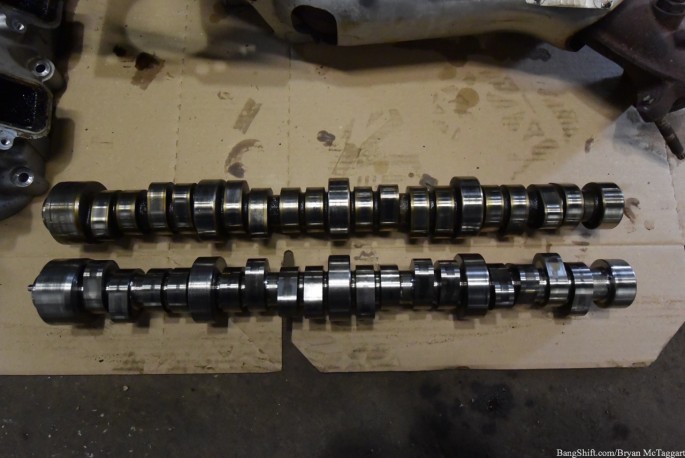 Top camshaft: the 5.7’s original cam. Bottom: a spare 6.1 camshaft (not the one in the engine now). Many asked during the Facebook live videos why we didn’t use the 6.1 cam seen here. Answer: At the last minute Erik saw something he didn’t like and grabbed another take-out camshaft. Still a stock 6.1 unit. 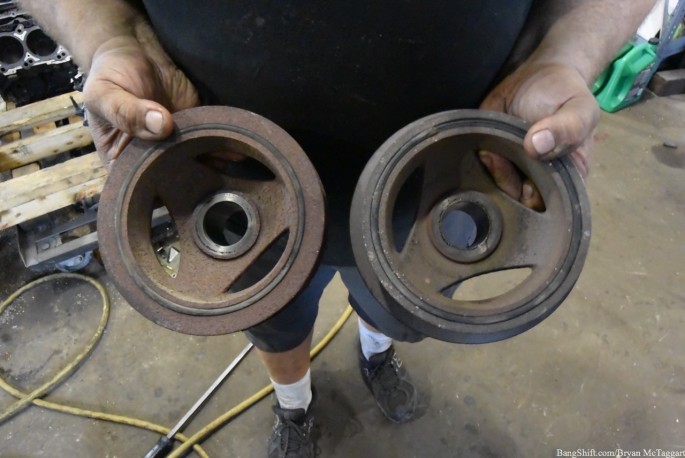 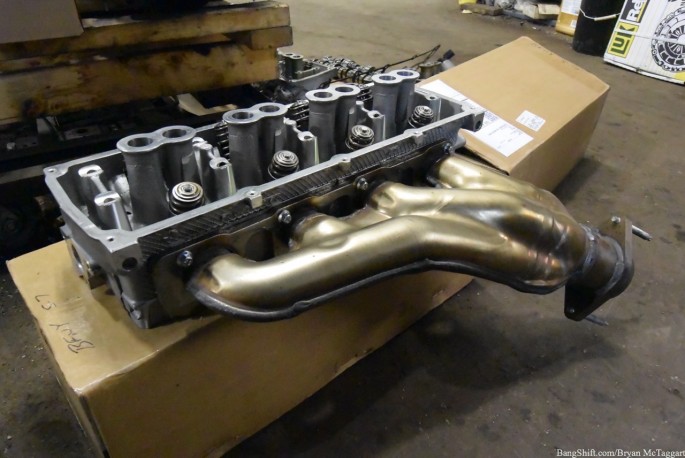 Now this is where things get really good. Craig Thibeau at Thitek ported and polished a set of 5.7 heads and cleaned them up something pretty, and we added to the look with take-off exhaust manifolds that were taken from a 900-mile-old 2016 Challenger SRT. Note the shape of the manifold: compared to the log-style 5.7 manifolds, that might as well be a header. 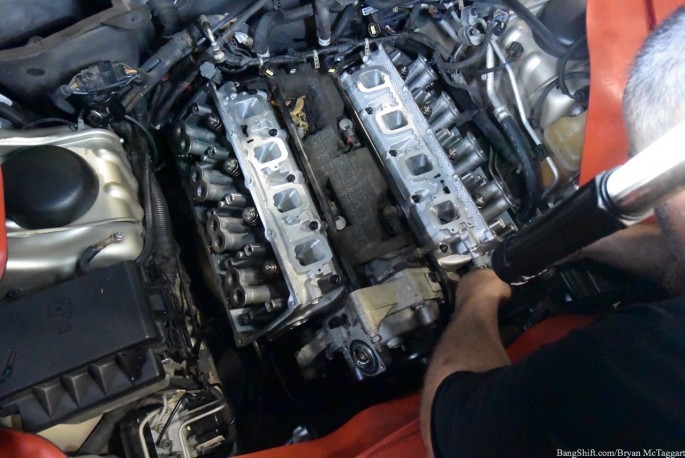 New parts are good parts, and in this engine bay the heads shined like diamonds. (Yes, we removed the leaf debris.) 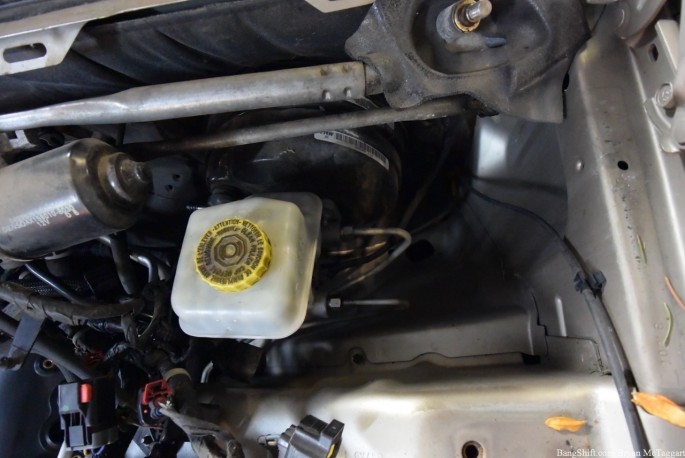 A side note: to facilitate easy removal of the engine, we removed the cowl bar, which revealed this neat little place to hide things next to the master cylinder…like a tiny cheater bottle painted gold or unassuming gray, if one was so inclined. (Grandpa will not be seeing nitrous. Sorry.) 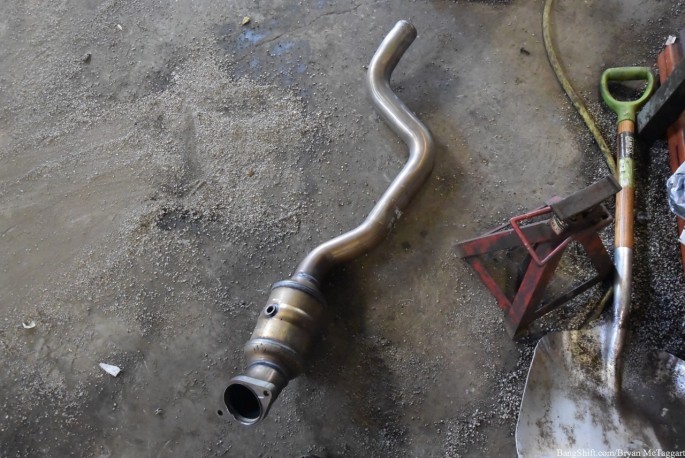 Also raided from the Challenger were the catalytic converters and downpipes, which needed to be enlarged at the ends to go over the Magnaflow cat-back kit. Nothing a pipe stretching tool couldn’t handle. 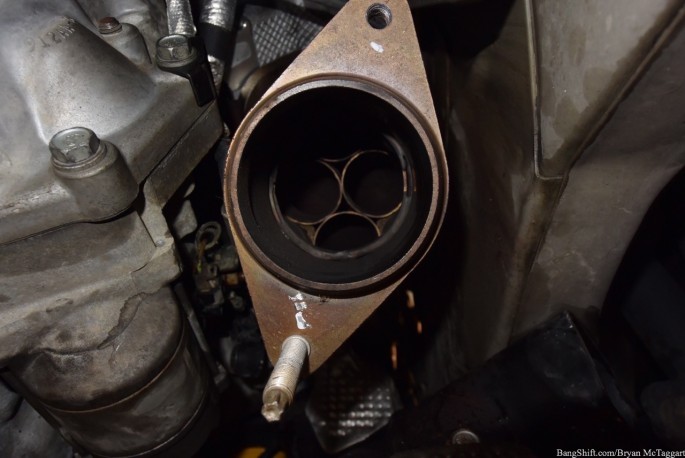 Much, much better. And a bit beefier sounding, too. 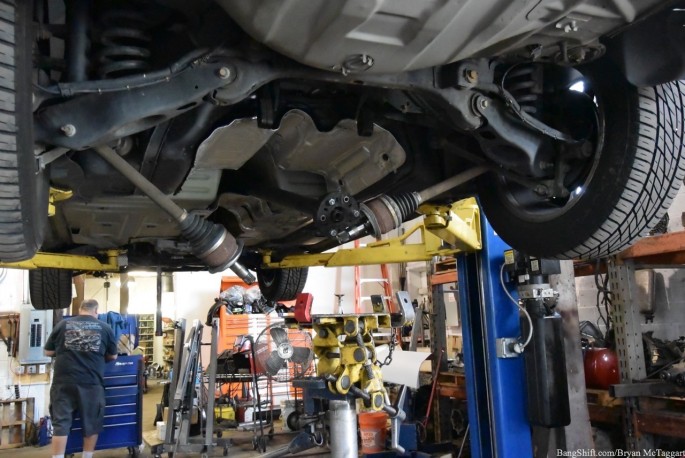 We almost didn’t do the rear carrier swap because we were concerned about having enough time. With the final Modern Street Hemi Shootout race coming up shortly after SEMA, everybody wants Erik to look over their car, but by mid-day on Tuesday we were so far ahead of where we expected to be that we said “screw it” and went for the gold. This ended up being the biggest bitch of the whole thing…not that the rear carrier is particularly difficult to do (with a lift and a transmission jack, it’s not too bad) but because of one detail Erik missed… 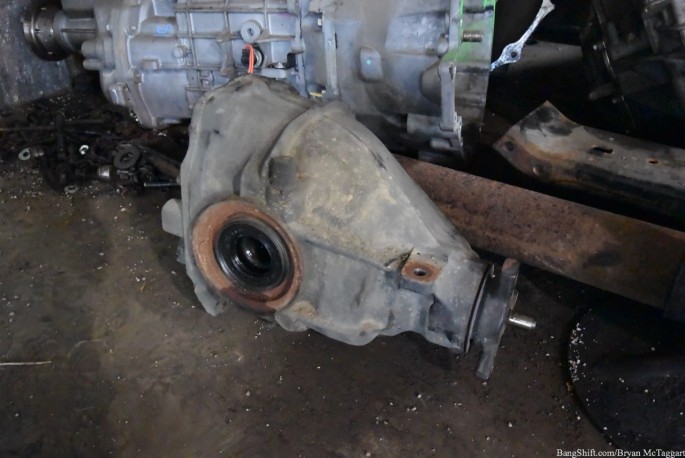 Here is the 2.82 rear unit that Grandpa had. Note the driveshaft coupling: it’s three-pronged. 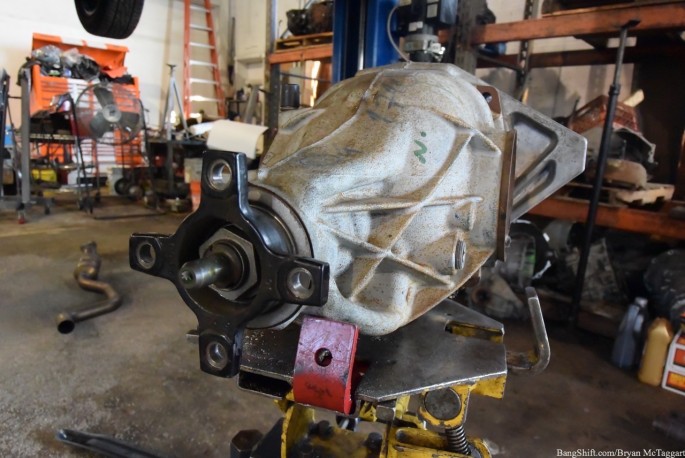 Here is the Mercedes E-class-spec 3.06 carrier. Note the four-pronged connector. Whoops. We needed the back half of an SRT driveshaft. Luckily for us, BFNY Performance is reasonably close to Cleveland Power and Performance (the guys with the six-speed 300 SRT-8) so we called in a favor and got the rear half of the two-piece driveshaft from a wrecked Chrysler SRT-8 from them. Thanks, guys! 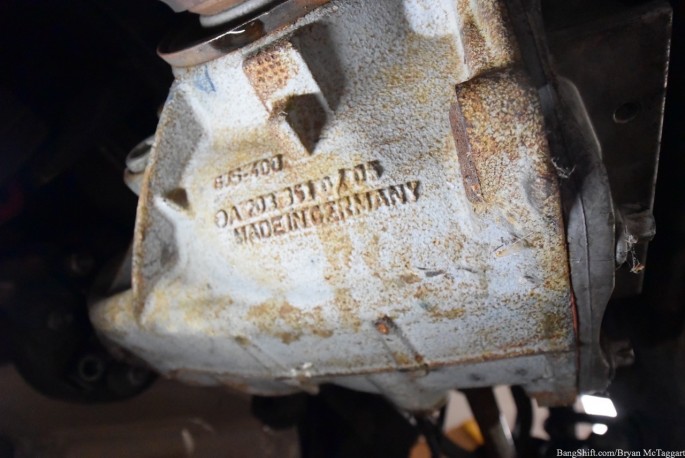 It’s difficult to find the good parts of the DaimlerChrysler era if you’re a Chrysler fan, but some of the parts are worth it. 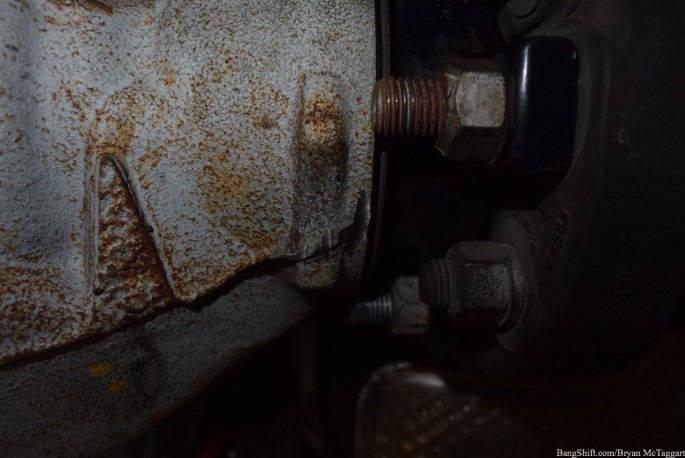 We did have to take the grinder to a bit of casting flash at the bottom of the case to make sure the driveshaft bolts wouldn’t hit the case while spinning. Nothing major, but even when it’s stock parts for stock parts, some modifications may be necessary. 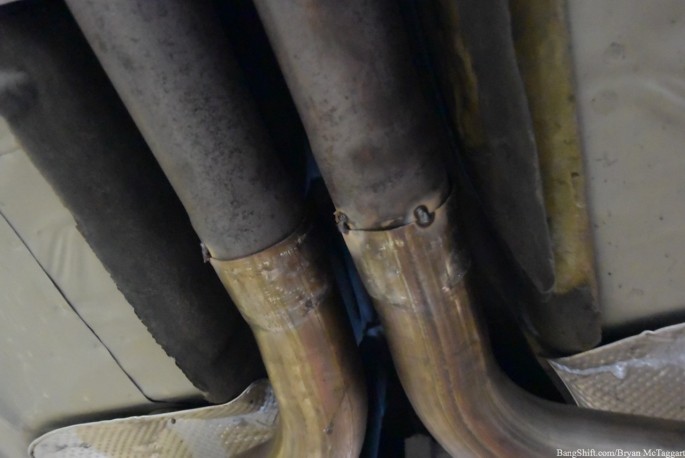 Here was an issue neither one of us planned for: the Magnaflow bands that we got with the cat-back kit were too small to fit over the catalytic converter down pipes, and Erik didn’t have exhaust clamps big enough. Solution: hasty tack welds for the trip back to Kentucky, where we will find a more permanent solution. 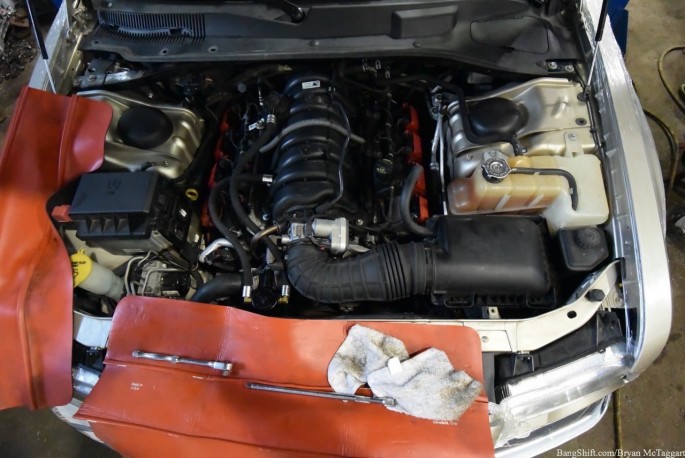 The airbox you see is not Grandpa’s original, but an SRT sourced unit that has been laying around the BFNY garage. We installed this after seeing the Spectre intake’s 90-degree bend tube (the connector between the charge pipe and the throttle body) sucking in during the baseline dyno run. 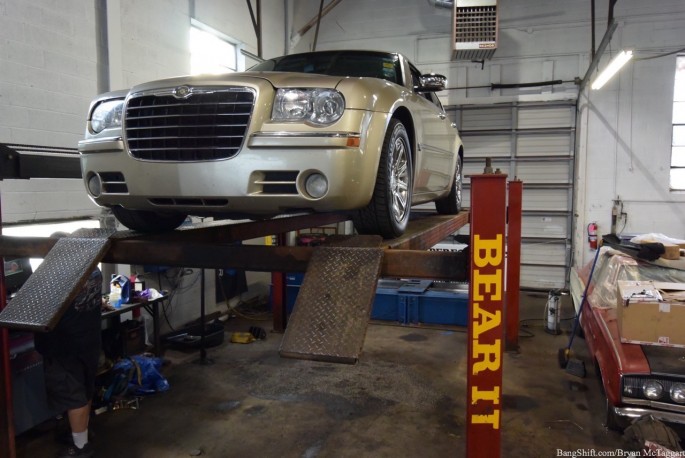 Once buttoned up and taken for a quick blast up the road (which showcased immediate results, by the way) Grandpa was put on the dyno and Erik got busy writing tunes. Here’s the current situation: because the fuel in the tank was 89 octane instead of 93 octane, we had to be careful to avoid knock, which meant we had to play it safe with timing. That meant that the goal of 350 RWHP, on the surface, didn’t happen. Here’s what did happen: the baseline test (pre-build) was 260 horsepower and 300 ft/lbs of torque. The final run was 296.6 horsepower and 324.6 ft/lbs of torque. That’s nearly forty horsepower, with more in reserve. And we will be working to dial in those last few horses at ATCO in a couple of weeks.

So, how does the car feel? Night and day. There is no more sluggish take-off at launch…instead of barely spinning tires on all but wet surfaces, a good roll into the meaty part of first gear breaks the back end loose, and it does so with a new-found voice that I can listen to for a long time to come. (My wife, upon hearing it start up, looked me dead in the eye and told me that I shouldn’t be calling it a “sleeper” anymore.) I can’t even begin to cover all of the little bits and tricks that Erik programmed into the car via the Trinity, but two items really stand out: the electronic gas pedal is now more hair-trigger than it used to be (that’s a good thing, by the way) and the AutoStick feature has been cured of every annoying ill it’s ever had since it first appeared in the Dodge Intrepid and Eagle Vision. Instead of being a neat toy to play with and doing little else (including responding to your inputs), the manu-matic mode of the NAG-1 now actually behaves like a useable manu-matic. Gear changes are right-now, gears actually hold without automatic shifting up into the next gear, and the shifts themselves have been tightened up some without being brutal. An unexpected bonus so far is that highway economy has increased noticeably…deepening the gears, eliminating the cylinder shutoff feature and giving me a reason to drive the car hard should’ve done the polar opposite. We will have the Chrysler out at a test-and-tune just before I hop a plane to Las Vegas as long as the weather holds up, so we will see what it does there. We are also going to have Grandpa out at ATCO Dragway in New Jersey for the final Modern Street Hemi Shootout series race next month. While out there, we will do some fine-tuning, including adding in some of the ignition timing we left out because of the fuel issue.

One last thing: cost. This is a pretty thorough build, so let’s look at some figures…the heads alone would set you back about $2,100 or so to have done and the labor on the overall build we did would be pushing the $1,400-$1,500 range if you farmed it out. The lifter set dinged us for $441, the fluids and gaskets took us for about $340, and dyno time cost varies by shop, but we were on the rollers for about an hour or so, and made at least five pulls plus a baseline run. But look at the other components: you can junkyard source, eBay hunt, Craigslist browse or dig through the countless forums to locate the camshaft, the converter, the rear end housing and axles, the exhaust manifolds and cats, and other items like the transmission control module for an SRT car, a 6.1L PCM, and if you’re handy with wrenches and don’t mind getting dirty and greasy, could save a ton of money on the deal. Don’t be intimidated by working on a late-model…do your homework and it’s actually pretty straightforward.

So what’s next for Grandpa after ATCO? At this point, we aren’t sure. After the year he’s had and the miles the car has covered, maybe some rest and relaxation is in order. There are other vehicles that need attention here at BangShift Mid-West, and we’re pretty stoked to have the Chrysler where it’s at right now.

We want to thank everybody that threw in on this deal…this build wouldn’t have happened without their generosity and support: Erik at BFNY Performance, Craig Thibeau at Thitek, Ben Maniaci and Paul Buza at Enhanced Transmissions, Tim Mulcahy at Cleveland Power and Performance, and from myself personally, Brian and Eric for manning the stations while I was spinning wrenches for the last couple of days. It’s been a blast…and it’s been worth every second. 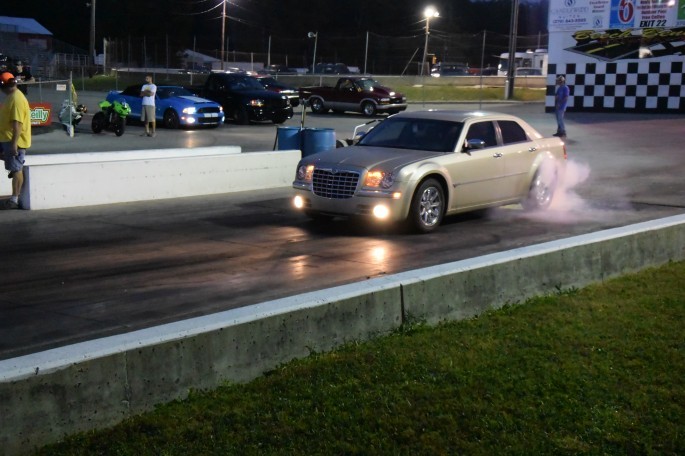 Badass Aviator Bob Hoover Has Passed Away at 94 SEMA 2016: Will The Steel Bodied 1967 Buick Street Funny Car From SEMA 2015 Be Topped?