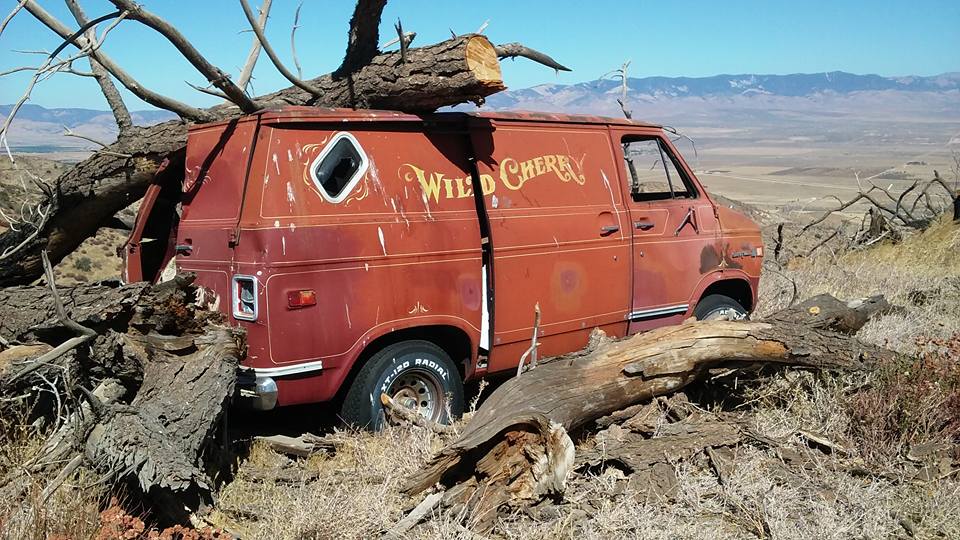 Van culture peaked in the late 1970s, fact. So did cruising, disco, and other questionable vices that to people of my age, represent the dark side of what my parents were up to before I was born. I know nothing about van culture except the jokes, what I’ve seen in old magazines, the few I find on eBay and Craigslist when I’m surfing through the ads, and old movies like “Van Nuys Blvd”. Basically, it’s about a guy who leaves the Midwest to go out cruising on that street, and involves all of the typical fun that is to be had: girls, racing, pinball…was there anything else? You tell me. 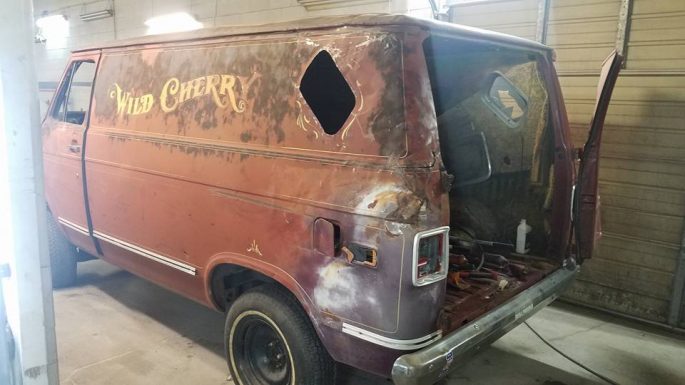 So what the hell does any of that have to do with this severely forlorn Chevrolet van, sitting out in the middle of nowhere with a tree resting on top as a final insult to injury? That van, “Wild Cherry”, was briefly seen in the movie and can be seen in the trailer for the film as well, and that was more than enough for a man named Chris Carter to step in and to rescue the Chevrolet. Last month the G10 was pulled from it’s resting place and loaded up onto a trailer, and hauled out to Illinois where it is undergoing a full-tilt restoration that is being partially crowdfunded, and partially fueled by auctioning off some of the parts, like the porthole windows, which will pay for the restoration of the captain’s chairs.

Put mildly, the Chevy was in a bad way when it was rescued. The driver’s side of the rear of the van took one hell of a beating from the tree, and it had seen the wrong end of a fire as well. But you know, we all know, how crazy someone can get when they are focused on what they want. The guy who originally built the van is in on the whole deal as well. This is one we will be checking up on from time to time to see how it comes along!

The Year Of The LS-Swapped Rolls-Royce? Take An In-Depth Look At The ICON Derelict 1958 Silver Cloud! Here's Our Second Batch Of Photos From The Sheely Collection Charity Autocross

13 thoughts on “A Serious Rescue: The “Wild Cherry” Chevy Van From The Movie “Van Nuys Blvd.””