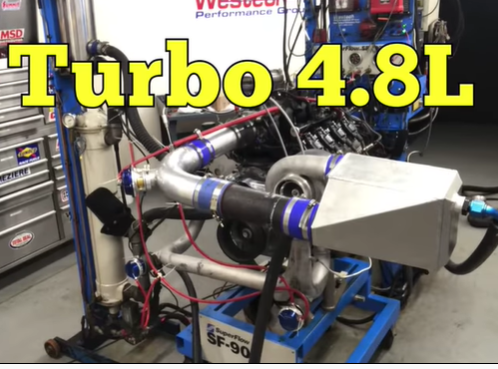 Since GM came out with the LS engine, the cheap horsepower craze has grown exponentially. The LS platform isn’t magic, it just has really good cylinder heads. In truth, that’s 90% of the greatness of an LS engine. Yep, great cylinder heads from the factory that are capable of supporting really high power numbers. Of course this great platform, along with other reasonably priced technology, made the perfect storm for cheap boost and 4 digit power numbers, and they just keep getting easier and easier to achieve. More than anything else, I’m asked about making 700-1,000 horsepower for cheap, using an LS based engine and there are several options for getting there.

In this video our friend Richard Holdener is taking a cammed 4.8L LS and strapping it to the dyno with two forms of boost. One is the cheap Caddy STS supercharger that he’s been testing recently and the second is a cheap eBay GT45 turbocharger. And before you get your knickers in a twist, know that we are not saying that either of these boost producers is the end all be all form to make maximum power on a cammed 4.8L. There have been multiple 4.8L LS engines strapped to the SuperFlow Dyno at Westech that have made WAY more power than these two combos. But that isn’t what this is about. This is about making power on the ultra cheap, and seeing if the supercharger or the turbo is the better choice for doing so.

Watch and let us know what you think.

Nothing But Fords, Dodges, And Rams From The Lone Star Throwdown! Blue Oval And Mopar Freaks Rejoice! FREE LIVE STREAMING DRAG RACING! We Are LIVE From The Southwest Showdown In Tucson All Weekend!