Cheap eBay Caddy Blower: How Much Power Will It Make On E85 Instead Of Pump Gas? 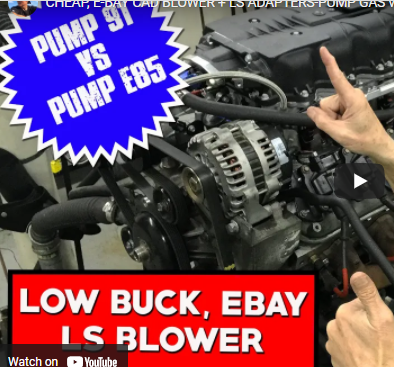 Yesterday we showed you what pump gas boost was good for with one of these ultra cheap Cadillac superchargers that you can buy new on eBay for just a few hundred bucks. They don’t bolt on, without adapters and such, but with those adapters they work pretty well actually. Will they make crazy big power like an aftermarket supercharger will? Not likely, as there is some pretty big disparities in the ports, but they are still capable of making some good tire smoking power, that’s for sure. But how much? Yesterday’s video had Richard showing you what this supercharger is capable of on pump gas, with very safe timing as is being used on the street already with these combos, but today he’s going to push it a bit.

What is E85 worth? How about some more timing? The pump gas test was done with just 10 degrees of timing down low and only 14 up high. That’s the kind of timing that would typically be used with big boost and race gas or E85. But with relatively low boost, in street car trim, you’d think you could get away with more in an intercooled supercharger setup like this. I don’t know, but I know that Richard will show us in this video and let us know just how much power it is capable of.

Kibbetech Black Prerunner Update: Man This Sucker Is Going To Be A Bad Ass! Plus More Project Updates. Lone Star Throwdown 2021 Photos Just Keep Coming! Nothing But Custom Trucks In This Batch!