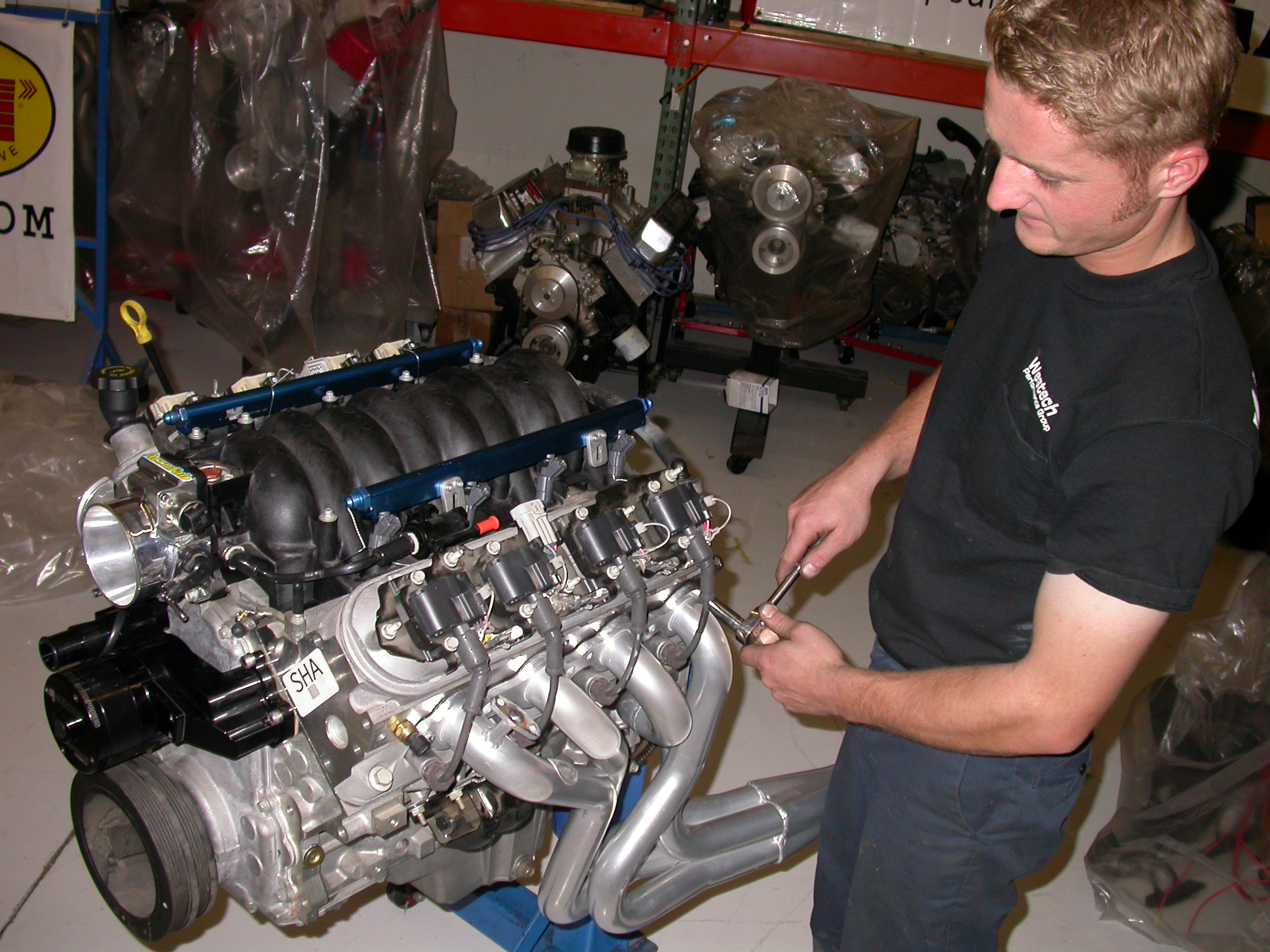 (Words and Photos by Richard Holdener with OnTheDyno.com) Hey bangers, if you own an LS motor or are thinking about getting one, you need to check this out. Like the original small-block Chevy, one of the many benefits of owning a member of the LS family is the way they respond to bolt-on performance. A case can certainly be made about the preferred order in which you add the various components, but swapping out the heads, cam and intake on your run-of-the-mill LS motor will yield amazing results. Ultimately the stock short block will limit the power potential, but not from strength. The limiting factor will actually be the available piston-to-valve clearance, as the factory LS pistons do not feature valve reliefs. There is a limit to the available cam duration (lift has much less of an effect on P-V) and therefore power production. Despite this minor short coming, huge power gains are available while retaining the stock (4.8L-6.2L) short block. To illustrate what we mean, we took a stock 5.7L LS1 and subjected it to one of a zillion possible top-end packages that include a Fast intake, RHS heads and Comp hydraulic roller cam. 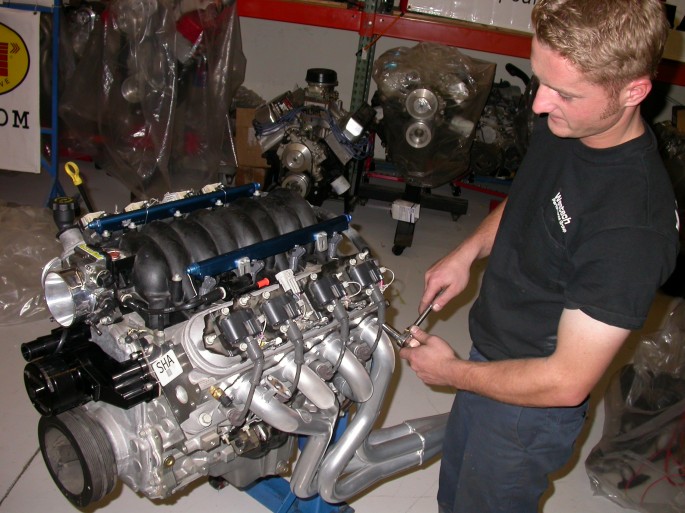 This stock LS1 crate motor was just begging for a top-end package.

The 5.7L started out life as a crate motor from GM Performance Parts. This particular LS1 was equipped with an LS6 intake. The idea was to run the 345-hp Corvette LS1 first in stock trim to establish a baseline then again after the upgrades. Prior to running, the LS1 was configured for dyno use with the installation of a few necessary items, namely Hooker long-tube headers, a Meziere electric water pump and the Fast XFI/XIM management system. The Fast EFI system was a critical element in the test as only through optimized tuning can maximum (safe) power be realized. Along with the management system, Fast also supplied a set of 36-pound injectors. Fed by the Aeromotive fuel system, the 36-pounders offered enough fuel to support over 575 hp-more than enough for our needs. The pan was filled with Comp Muscle Car and Street Rod oil (the test motor was broken in long ago) and received a K&N oil filter. After fine tuning (13.0:1 A/F and 32 degrees of total timing), we were rewarded with peak numbers of 414 hp at 5,800 rpm and 418 lb-ft of torque at 4,700 rpm. 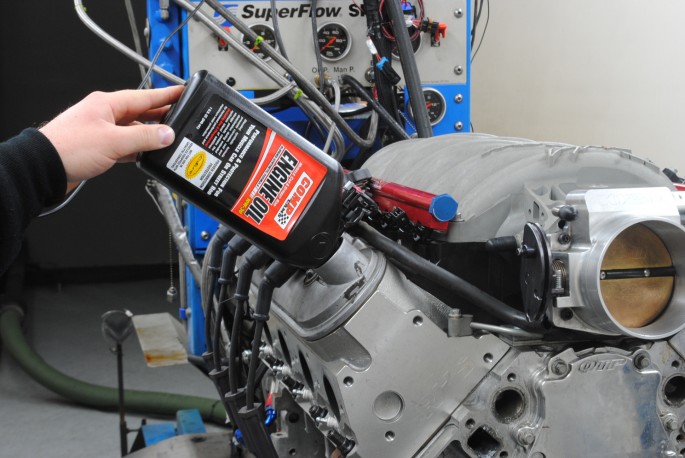 Prior to running, the LS1 received 5 quarts of Muscle Car and Street Rod engine oil from Comp Cams. 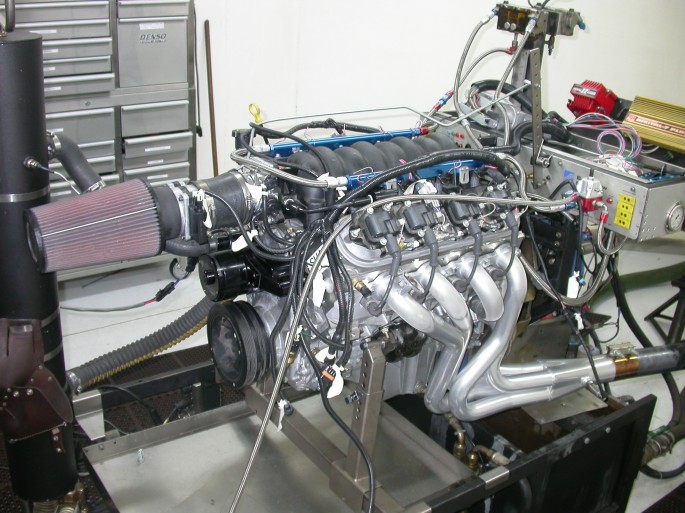 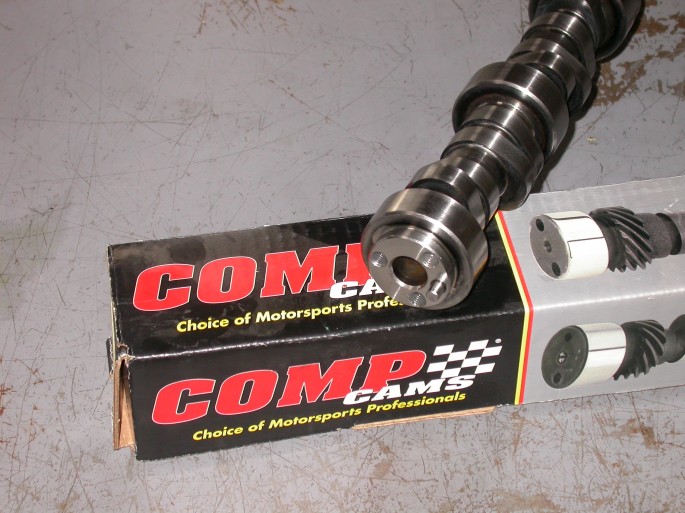 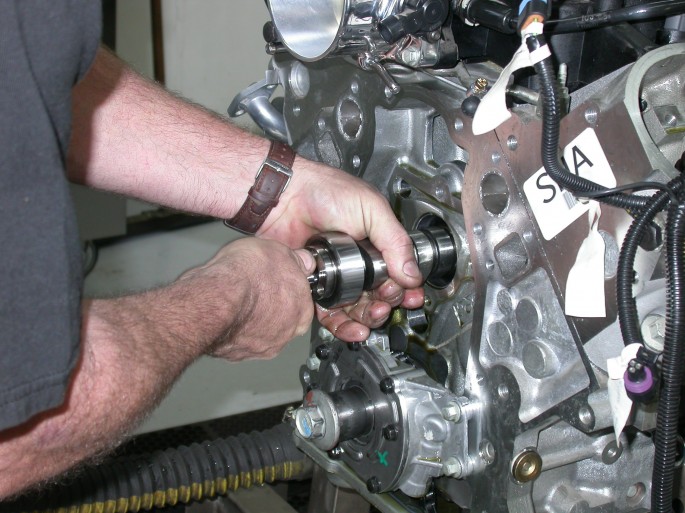 On the engine dyno, cam swaps on LS motors are quick and easy, so out came the stock can and in went the Comp cam.

The cam was teamed with a set of RHS cathedral-port heads. Though no longer available from RHS, we had an old set sitting around just begging to be run on this LS1. The CNC-ported RHS head featured 225-cc intake ports, a 2.05/1.60 valve package and 60-cc combustion chambers. The RHS heads flowed enough to support over 600 horsepower, or more than we ever hoped for this stock short-block LS1. 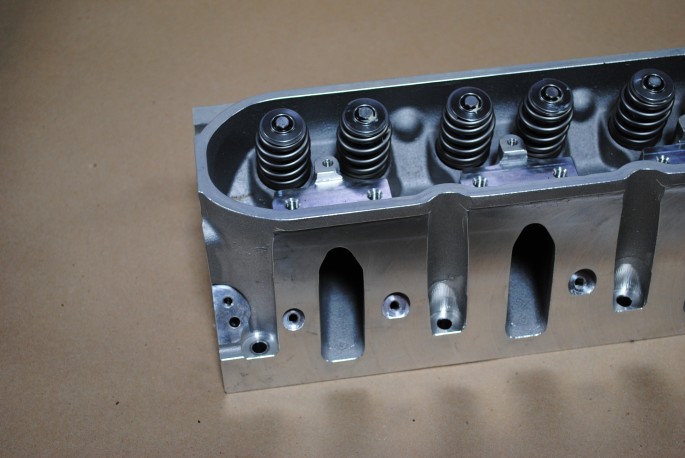 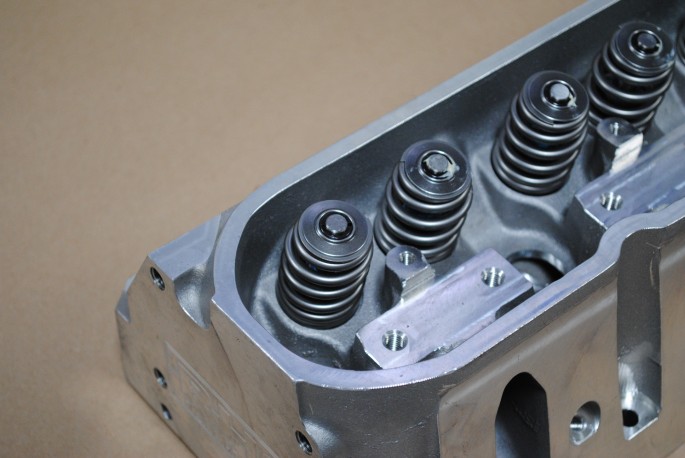 Naturally the valve springs were upgraded to accept the high-lift Comp cam. These heads were equipped with 26918 beehive springs and titanium retainers. 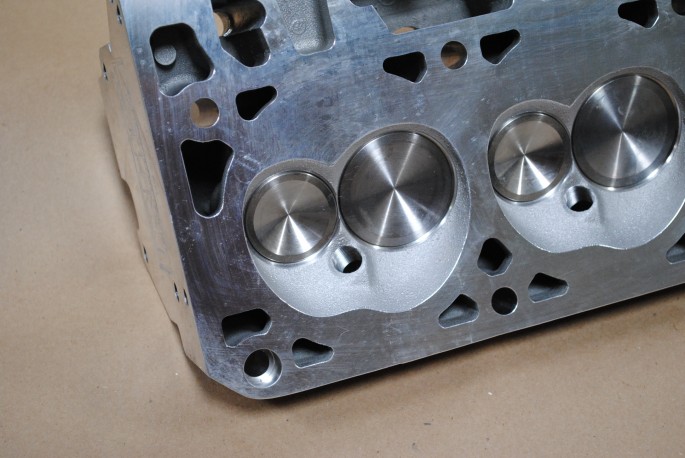 The Comp cam and RHS heads were topped off with (what else) a Fast LSXR intake. You may think the 102-mm intake to be a tad large for the stock-displacement LS1, but judging by the results of this test, you’d be dead wrong. It was tested alone against the stock 6.0L truck manifold and bettered the stock intake everywhere, from top to bottom (by as much as 27 hp). Feeding the LSXR intake was a Fast 102-mm throttle body. 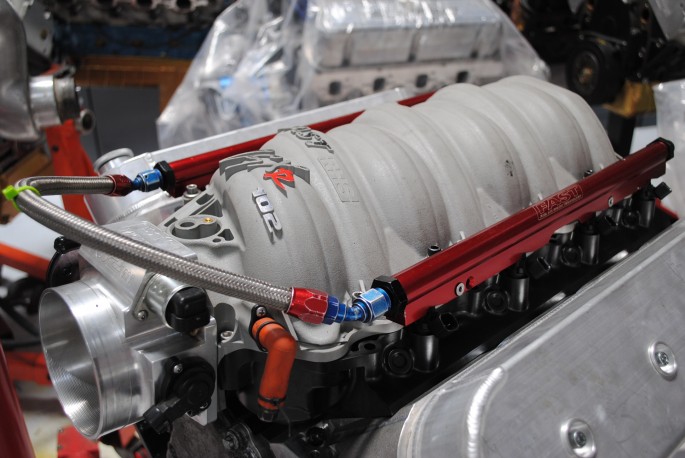 The heads and cam were teamed with a 102-mm Fast LSXR intake, Fast fuel rails and 42-pound injectors (also run on stock motor). 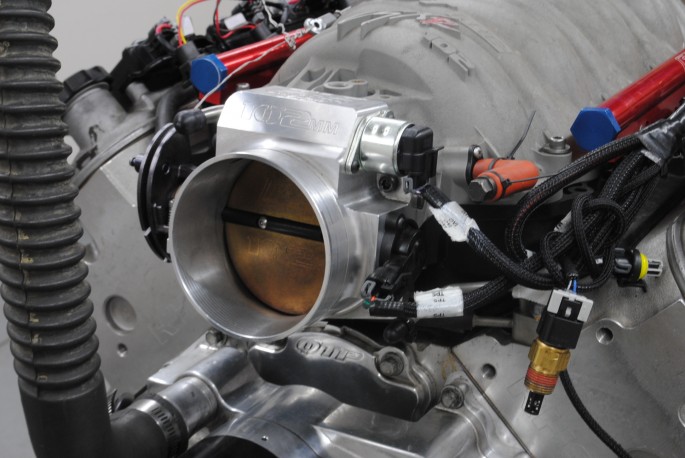 The Fast intake was fed by a 102-mm Big Mouth throttle body. This was more than the little LS1 needed, but (contrary to internet banter) there is no penalty in low-speed power for a large throttle body.

After some fancy finger work on the key boards, we dialed in the motor with the Fast XFI management system. The amount of fuel required to maintain the 13.0:1 air/fuel mixture told us this combination was going to make considerably more power than stock. When all was said and done, the Comp, RHS, Fast upgrade netted us an additional 125 hp (measured peak to peak-more at higher engine speeds). Where the stock 5.7L LS1 produced 414 hp and 418 lb-ft of torque, the top-end package upped the ante to 539 hp at 6,700 rpm and 464 lb-ft of torque at 5,500 rpm. With the exception of 3,000 rpm, the upgrades increased the power output through the entire rev range, with the upgrades offering a staggering 137 hp at 6,500 rpm. 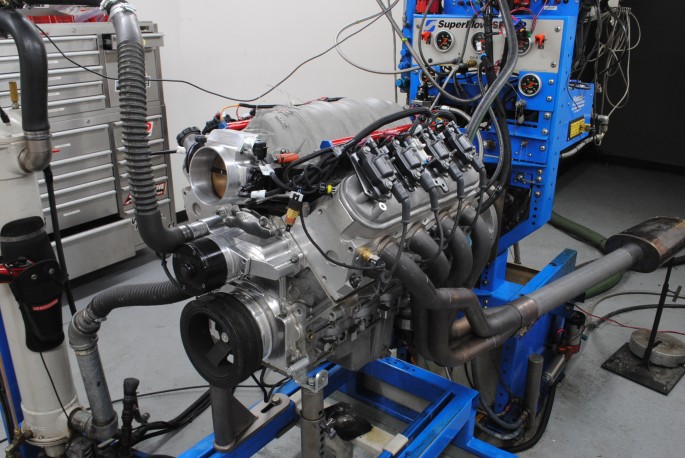 That is a huge gain, but it comes not unexpected from the LS family, as they have shown time and time again that they love top-end upgrades. Given the ease with which we just produced 539 hp with this 5.7L LS, we couldn’t help but wonder if the same thing was possible with a conventional 23-degree small block?  That, my fellow bangers, is a different test for a different day. Do you want to see it? What else would you like to see us do on the dyno? Let us know, we’ll listen.

(Chad Note: Were you astute enought to notice that the first dyno photo has different headers  and a different dyno cart, etc? Yes, the baseline testing was done before this particular test. Rest assured the engine was bolted to the Superflow at Westech and baselined to make sure all numbers being quoted were from the most recent test. They were dead on, we just didn’t get a “before” photo. If you saw it, kudos to you. We knew you would. You guys is smart. )