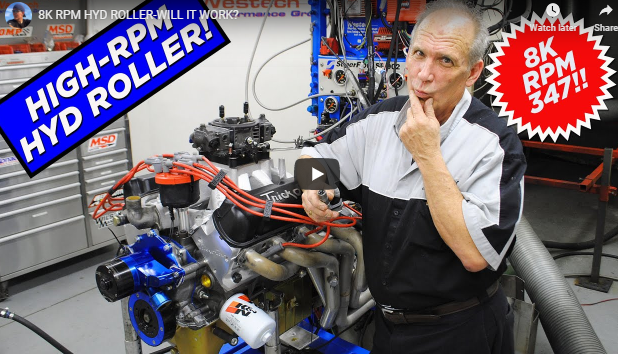 It has often been said that the only way to get an engine to rev is by using a solid lifter camshaft. Whether flat tappet or roller, the solid lifter cam is ALWAYS thought of as the race cam that is needed for big rpm. But what is big rpm? Is 7,000 a lot of rpm? 8,000? 9,000? For a lot, and I mean A LOT of people 7,000 rpm is big rpm. And for good reason. After all, the 1960s had GM, Ford, and Mopar highlighting specially equipped small blocks that revved that high, but their regular combos not going much over 6,000 to 6,500 rpm. And in the later 70’s, 80’s, and 90’s the factory combos all quit making power in the 5,000 rpm range. So much so that many cars didn’t even come with tachs, and I think some of that is because it was so sad to see them all done at 5,000 rpm. But I digress. Recent engines, specifically GM’s LS, Fords Mod, and Mopar’s HEMI, are high winding engines in comparison. Of course this makes sense in the case of the Mod motor, after all it has overhead camshafts and, at least in theory, less stuff moving around that has trouble at high rpm. The HEMI and LS have hydraulic roller camshafts and even in trucks often spin to 6,000 rpm or more in factory trim.

But what about a high performance combo? What if I want to build a 7,000 rpm screamer? Or an 8,000 rpm screamer? Do I need to step up to a solid roller camshaft in these applications? How about old school combos like a small block Ford?

On This Day: Cadillac Is Founded In 1902 From The Ashes Of The Henry Ford Company Money No Object: HELLWAGON! This 1989 Jeep Grand Wagoneer Is Packing Ma Mopar's Torque Monster!