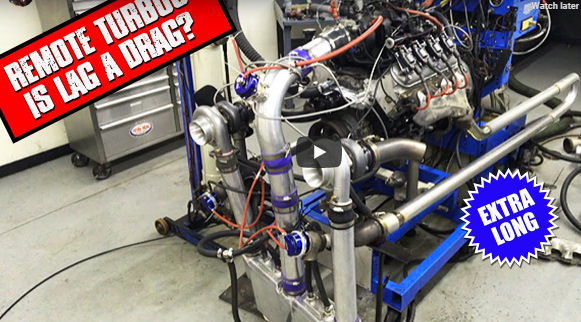 Remote Mount Turbos have been found in all kinds of applications, and they often are the topic of heated conversations about how well they work and the downfalls or advantages of having them mounted outside the engine compartment. Some folks say they get rid of heat and therefore are better for power, others say they are so far from the engine that they will lag horribly. Of course reliability and oiling are also topics of conversation, but for the most part the arguments are just a matter of opinion with little testing. Of course Richard Holdener has the engines, the turbos, and the dyno cell to be able to test the theories and performance of these systems, and that’s exactly what he decided to do. But before the testing can begin, some thought had to be put into exactly what to test, so that real conclusions could be made.

When arguments are made about remote mount turbos there are some folks that say the extended length of the exhaust side of the system is a problem, and others that say the increased length of the intake side is the issue, and that one or the other will cost power and make the engine lag. So which is true? Will it make less power with remote mounted turbos? Or does one side effect it more than the other?

In this test, Richard tests the twin turbos mounted conventionally and then, without moving the turbos themselves, he extended the exhaust and intake sides of the systems to represent them being installed in a vehicle remotely. But, he tests each one individually as well to see how they effect power. Watch the video below and you’ll understand, and maybe even be surprised.

EFI With The Classic Looks Of A Carb? The New Terminator X Stealth 4500 And 4150 Allows You To Keep The Look But With EFI Tuneability MAHLE Motorsport LSX ComboPowerPak Piston Kit for LS Engines