Throwback Speed: Some Of Our Favorite Old Car Websites Still Chugging Along In 2020! 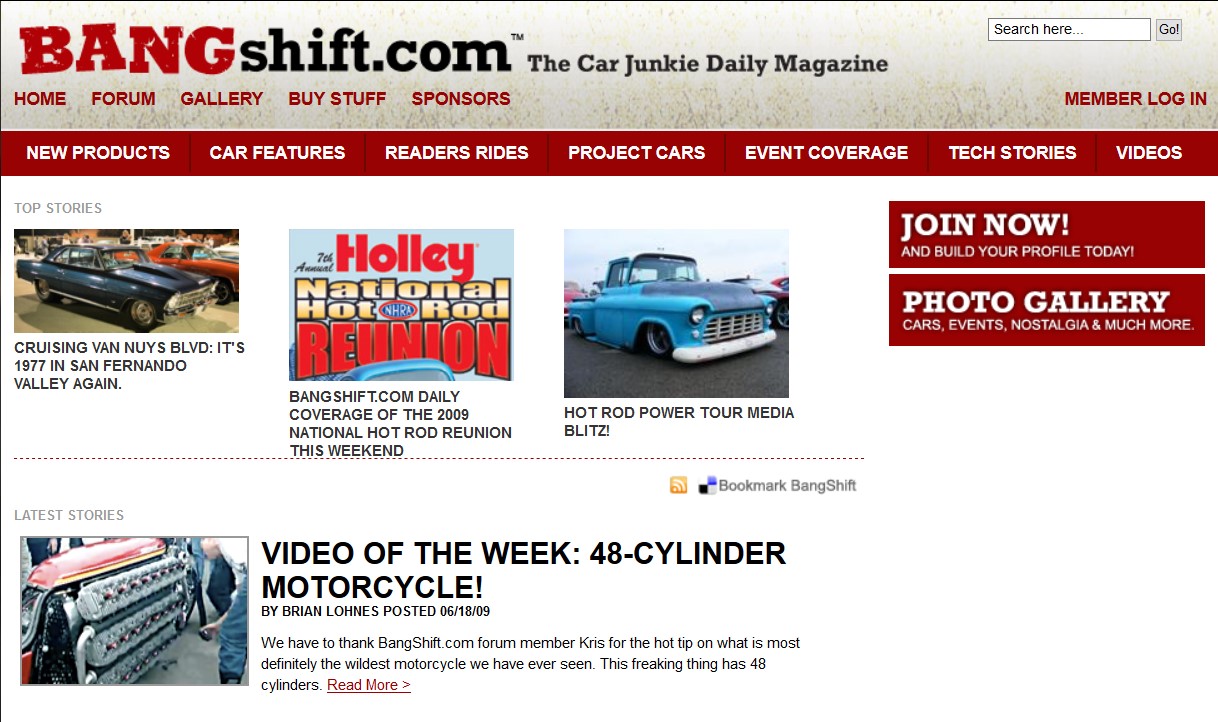 (All images courtesy of their respective websites unless otherwise noted)

Believe it or not, the internet as we know it today has been around for 30 years this year. While online bulletin boards and mail servers existed before then, it wasn’t until Christmas Day in 1990 that a guy named Tim Berners-Lee, a software guy at CERN (You know, the Large Hadron Collider guys over in Europe) successfully set up a communication between a web browser and a server. While originally meant to link scientists and professors around the globe, this new World Wide Web trickled down to the unwashed masses just a few years later. Before long, these things called Websites started popping up on the cyber landscape, along with Web Browsers to view them. All sorts of info could be found on these sites, from the entertaining to the nefarious. But among all of these early adopters of this exciting tech boom, car enthusiasts latched onto the technology right away and never let go.

By the mid-1990’s, automotive websites started popping up all over the place, and it was a game changer. Just think about it: all the facts, tips, and tricks that car geeks stored in their brains could now be stored on a shareable webpage for all to see and reference. And once search engines showed up a little later on, learning specs on your favorite car or finding out what the casting numbers meant on those cylinder heads your buddy gave you years ago was just a few clicks away. For a lot of people, including yours truly, the amount of knowledge gleaned from a few web searches would prove invaluable when applied to wrenching sessions. Although we had reference books and magazines already, being able to punch up the exact knowledge you needed to know almost instantly was incredible back then, and still is today.

Speaking of the present day, I found myself recently looking back at my own online history in order to remember some of the modifications I made to my 1979 Trans Am project car. I’ve had this heap since 2002, and I tried to keep a digital record of what I did to it in case “future me” couldn’t remember some of the things I did to the car early on. Back then, there were three ways to do this: build a website, start a thread on a forum, or create a page on CarDomain.com. While I didn’t know how to build even a simple Geocities site, I definitely knew about CarDomain.com. 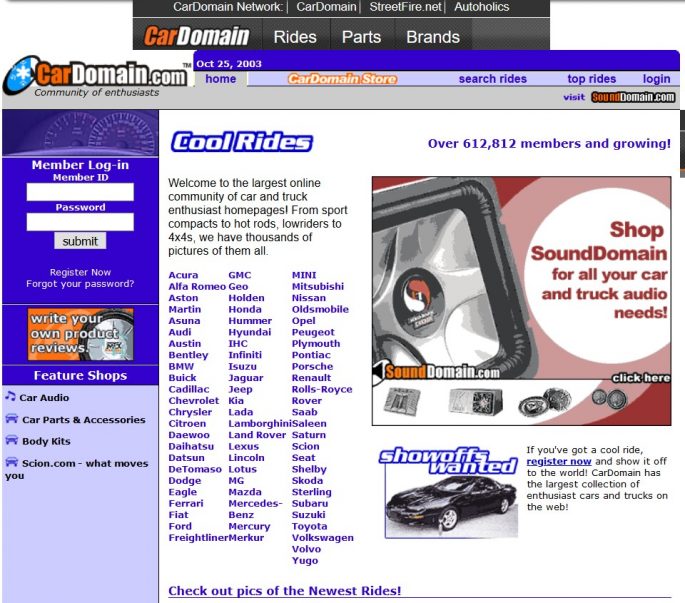 Started back in 1999, CarDomain.com was one of the first websites that I can remember where people could post up their own cars and host what we would consider a blog today. You know you had a page on there.

And while digging around my past, I was shocked to see that my old CarDomain site was still up there! While it’s all jumbled up due to a number of site layout changes over the years, all of the pictures of both of my old Trans Ams were intact. It was interesting to look back and see what I was doing and thinking back then, and I remembered things I did to the car in question that I completely forgot about. 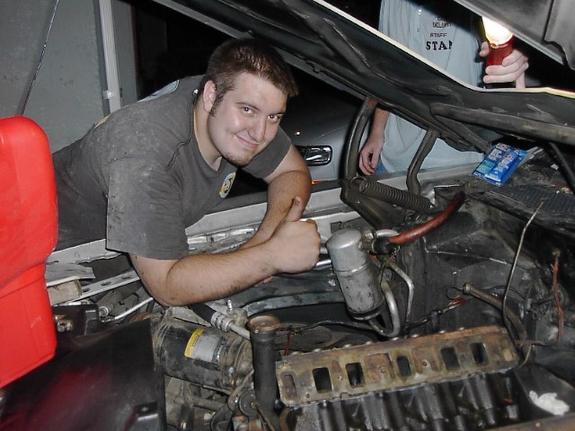 Here’s me, circa 2002, reinstalling the cylinder heads on the Olds 403 that used to reside between the fenders. The previous owner tried to install headers on the car, but aborted mission when studs started snapping off in the heads. When I tried to install my own headers, all of the rest snapped off. I had to pull the heads and have all of the studs removed and the holes heli-coiled. I never would have thought that I’d still be wrenching on the same stupid car 18 years later.

This got me thinking about other old online haunts that I used to frequent back then. Were any of them still up and alive? I thought back to the sites I used to frequent all the time, and decided to investigate. For some of the sites, I used the Internet Archive’s Wayback Machine to see how much (or little) has changed over the years. Here’s what I found!

John Wallace’s repository of Pontiac-based information has been up since 1998 and has changed very little over the years. To be completely honest, this site RULES. When I started getting interested in old Pontiacs back in high school, I found this site and started memorizing casting numbers for future junkyard spotting trips. When it came time to actually piece together a Pontiac engine for my Trans Am, you know I went here first! The biggest update over the years is the link to their Facebook account. Nothing else has changed, aside from the ads. Truly a relic. 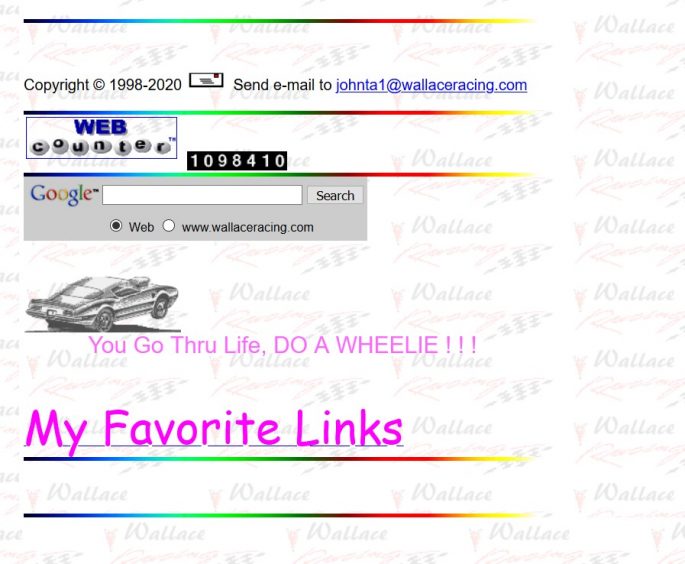 When was the last time you saw a web counter? Wallace Racing has seen 1,098,410 hits since its publication in 1998. A few hundred of those hits were probably from me over the years. DO A WHEELIE!

Yes, they made a Grand National before 1984, no, it was not black, and yes, this site is going to teach you all about them!

Another site I found while messing around on Lycos.com in the high school computer lab in the late 90’s was Before Black. This is a site dedicated to early Turbo Buick stuff, before the all-black 1984-87 Grand Nationals stole the show (hence the clever name). I was enamored with Turbo Buicks at the time, and always wondered about the non-EFI cars that started it all. The site also included some info on the 1980-81 Turbo 301-powered Trans Am, as well as some of the other carbureted turbo cars GM produced at the time, like the 1980-81 Chevrolet Monte Carlo Turbo and the very rare Buick Century Turbo Coupe. The site hasn’t been updated since 2008, but it’s still mostly functional. Sadly, the forum is long gone.

Status: Still up, but updated. 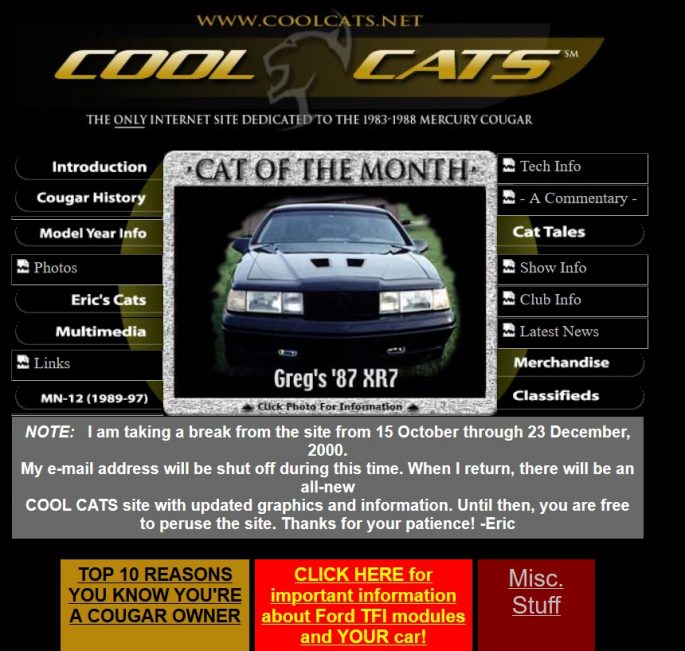 Greg’s ’87 XR7 is badass, even today. The Turbo Coupe hood bolts onto the Cougar, too!

Eric wasn’t kidding, folks! They updated a few times over the years, and are still going strong. And Eric is still running the show!

Back in high school, I had a pair of $250 1987 Mercury Cougar XR7’s, both purchased wholesale from a local car dealer where family worked. When the first one croaked, they had another, nearly identical one freshly traded in that they sold me for the same price. And to learn about the car, I Asked Jeeves, who brought me to this site. CoolCats.net was (and still is!) a repository of great information pertaining to the 1983-88 Fox Body Mercury Cougar. Here, I learned all about the cars I brought home, what options they had, and easy mods to coax a little extra power from the 150hp low output 5.0 under the hood. I also saw all the “cool mods” other owners were doing to their cars in the Reader’s Rides section and wanted to do the same to mine in hopes of getting awarded Cat of the Month! Sadly, I sold the car before heading off to college because my parents thought it was “unreliable”. Boy, I’d show them what unreliable a car could be with a purchase I’d make in a couple years… 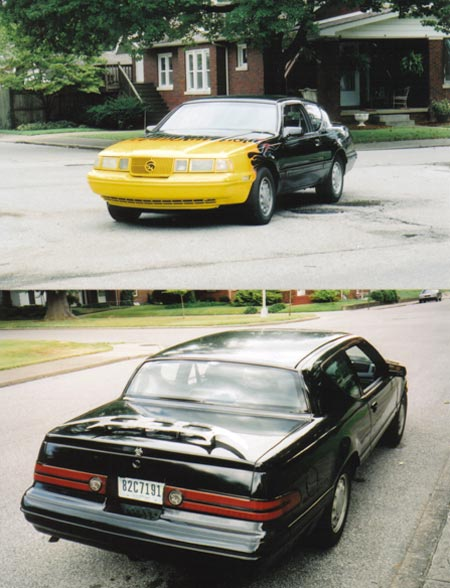 Nothing says performance like mounting a Klingon Bat’leth as a spoiler to your 1987 Cougar, as one of the reader submissions from CoolCats proudly displays. Great for keeping the rear of the car on the ground, as well as keeping Romulan and Federation scum at bay. Glory to you and your project car. Qapla’!

Status: Still up, but updated. 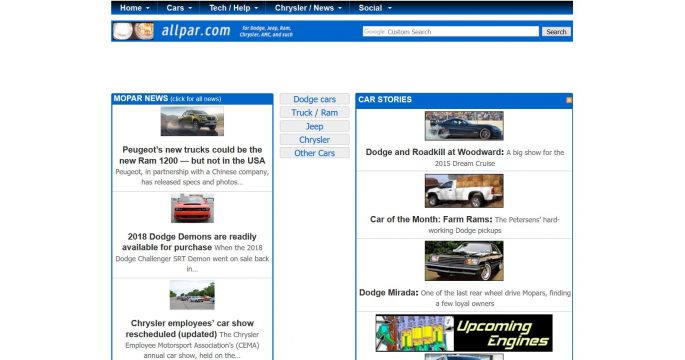 Updated, but still really close to the original concept.

What’s the first thing you do when you decide to buy an old Mopar for the first time? You go to Allpar.com. This site has been around since 1999, and it’s still updated regularly. There are 21 years worth of news stories, tech articles, and more. Before the Project Power Laggin’ came to be, you know I spent time here reading about 1972-80 Dodge trucks, learning the ins and outs of what to look for when buying one. It’s still a great place for all things Mopar, all these years later.

Allpar is such a great site for looking up history on your favorite Mopar. I basically memorized this page before checking out the Power Laggin’ just so I knew what I was looking at. Great stuff.

Status: Only exists on the Wayback Machine. Pour one out for Lauren Enginering.

Put this right in my veins!

Nothing pampers your G-Body like a sweet set of ground effects, that I can tell you!

I would do bad things for this El Camino. Bad, bad things.

Way back in the mid-90’s, when my friends and I started transitioning from riding bikes to driving cars, my first friend to get a car ended up with a 1986 Monte Carlo Sport Coupe (my first story for BangShift was about this very car!).We thought it was boring, so he set off to modify it to be “cool”. In 1995, that meant you need cool wheels and a body kit. We scoured the back of Car Craft and Hot Rod where they had those little black and white ads, and one of them was for this company. Much like similar outfits like Choo-Choo Customs and RK Sport, Lauren Engineering produced a line of oh-so-90’s body kits, spoilers, noses, and more for GM G-Bodies and the occasional F-Body. According to the Wayback Machine, they finally moved from the back of Car Craft to the internet around 2006, but only lasted on there until 2008. I doubt the business is still active, since the site went down a few years ago, but with the Rad Era car market in full nostalgia mode right now, I bet they could land a few buyers for these kits today. 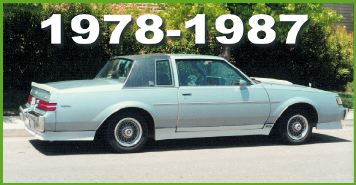 What happens when Grandma hands you down her Regal Presidential Edition, but you really wanted a T-Type? Call Lauren Engineering!

Stop me if you’ve heard this one before…
Once upon a time, a some guy by the name of David Freiburger started a web blog. Not sure if you’ve heard of him, but Freiburger was into cars and worked for some car magazines or something. After branching out to create an online video site/platform called CarJunkieTV, he created his blog to write about cars again, bringing along some guys named Chad Reynolds and Brian Lohnes from the CarJunkie days. In 2009, Freiburger got back into the magazine business and the reigns were handed over to Chad and Lohnes, at which point the site was re-named.

Whoa, dude! Whatever happened to that Freiburger guy anyway?

The internet is a big place, and we know we are only scratching the surface here. There are tons of car sites from the beginning of the World Wide Web that are likely still hanging around. Some may be dusty, old sites, and some may have been updated the entire time, but they are out there.

What are your favorite old websites that are still around? Let us know in the comments section below!!!

Throttle Therapy: This Petrolicious Feature On A 1965 Mustang Fastback Touches On Many Of The Reasons We All Love Cars Finned Drums FTW: 1962 Pontiac Grand Prix - Tasty Bubbletop!

4 thoughts on “Throwback Speed: Some Of Our Favorite Old Car Websites Still Chugging Along In 2020!”