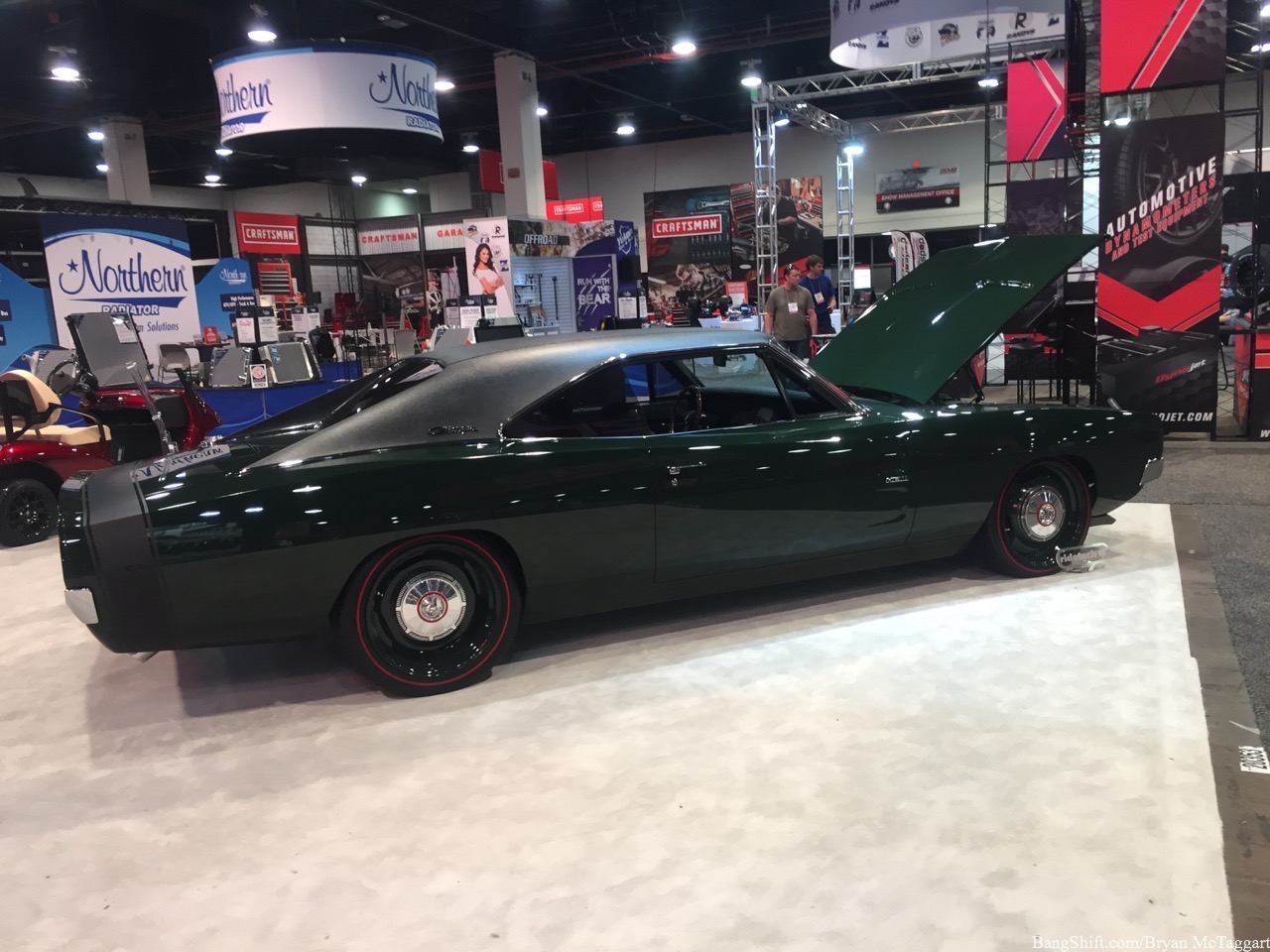 I might be battling traveler’s cold…or bronchitis…or the plague, depending on how I’m feeling at the moment, but this year’s SEMA was a very interesting and varied grab-bag of vehicles in my eyes. There was a lot of the usual too-pretty, expensive cars with rims and models, and there was the fleet of bro-dozers to contend with, but what I did find, I liked…a LOT. Not in the “oh, that’s cool…” sense, but where I’d stop and check things out over and over and over again just to make sure there wasn’t a detail that I missed. I didn’t shoot many photos this year compared to other years of just random cars (Brian and Chad got a lot of them already, which you can see in the galleries we have up) but for what it’s worth, here’s my top 11 choices from SEMA 2017. Did I get it right or wrong? Tell me below! 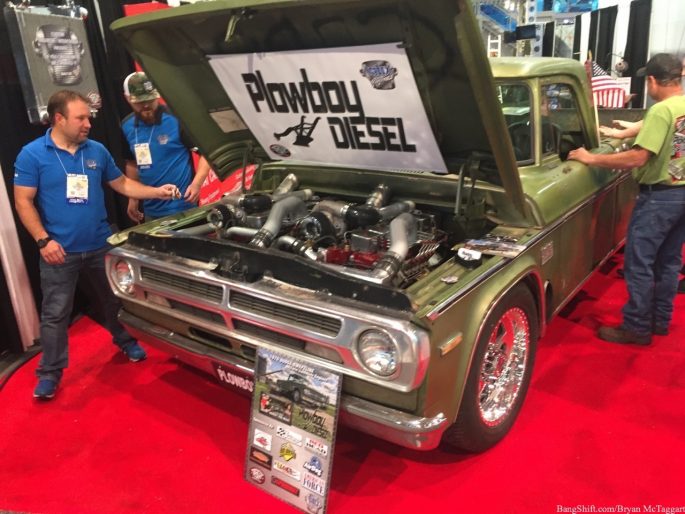 I almost missed this truck. Seriously, I somehow almost missed a 1970 Dodge with two twin-turbocharged Cummins twelve-valves in the engine bay. As I was roaming by the green Dodge with the well-aged paint, I overheard a conversation about how the intercooler was one massive unit mounted up front. I paid attention to that, turned, and had started walking away when my brain, jet-lagged from the trip, noted two rows of covers. “Wait a f***ing minute…”

What really gets me about the Dodge isn’t the over-the-top build idea. It’s cool, don’t get me wrong. It’s that if you shut the hood, throw a tonneau cover over the bed, and don’t take a tape measurer to the floor of the cab, you’d never suspect a thing. You’d write it off as a Cummins-swapped D-series, missing the small tricks that makes this build so neat. 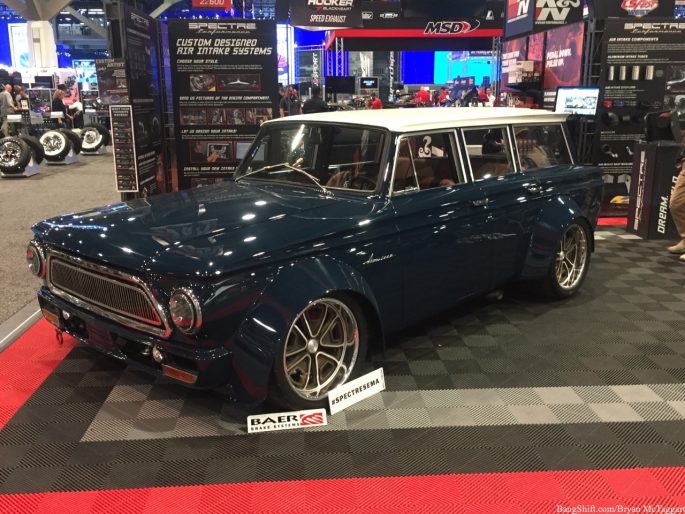 Suzy’s Rambler isn’t here just because it’s cool, or as a quick follow-up to the preview that we brought you a couple of months ago. Her car is here because this little Rambler was a magnet for just about any and everybody you could imagine walking the floor. I often stopped by the Spectre booth to check up on her and see how things were going and more often than not, someone was there asking questions or snapping photos. From teenage kids to the Hoonigan team, YouTube personalities, foreign media, and other builders, the Rambler brought them all in like a porch light draws moths. Just wait until they get a load of her autocrossing the living wee out of this car… 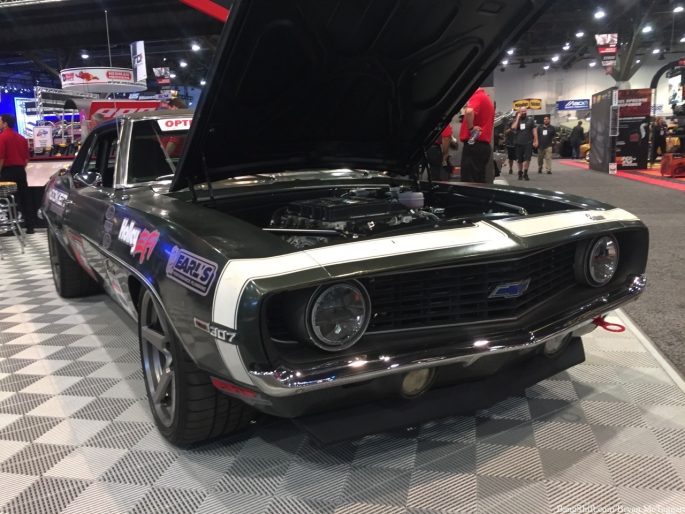 “They’re only original once.” They sure are, and no, Stielow’s car isn’t original at all. It’s built like any of the other Camaros the guy is known for, to go fast, handle well and to look good while doing it all. But here, it’s the small touches that keep the car looking like a used-lot find circa 1981. The well-worn green paint is perfect, and so is the gatorgrain vinyl roof treatment. The factory “307” emblems, the nose stripe, and even the faked dealership badge on the tailpan of the car makes you think that Stielow found an impossibly nice but well-weathered 1969 Camaro and proceeded to upgrade it for track duty. On appearances alone, this car is awesome. 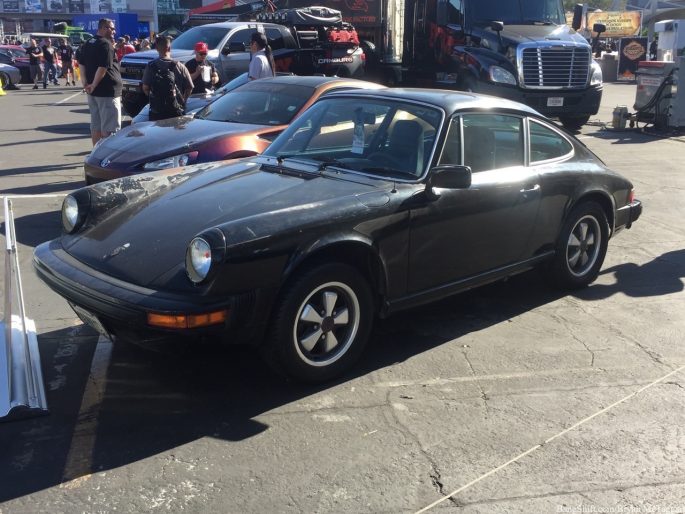 Over near the Superformance display sat an unmodified, straightforward Porsche 911. It looked like it had been dragged out of the garage and parked at the show, left alone in the sun. Porsche? At SEMA? Unmodified? Whoa…what was the deal here? I didn’t find out until I was leaving the show to go back to the hotel on Friday afternoon. I was chatting with a young man who was curious about the Drift Cobra when he mentioned that he was the son of the father-son project that this car is the root of.

(I wish I could tell you more, but the early onset of the Las Vegas Plague was providing the headache from hell. Either way, it was nice to see a basic Porsche being enjoyed and restored.) 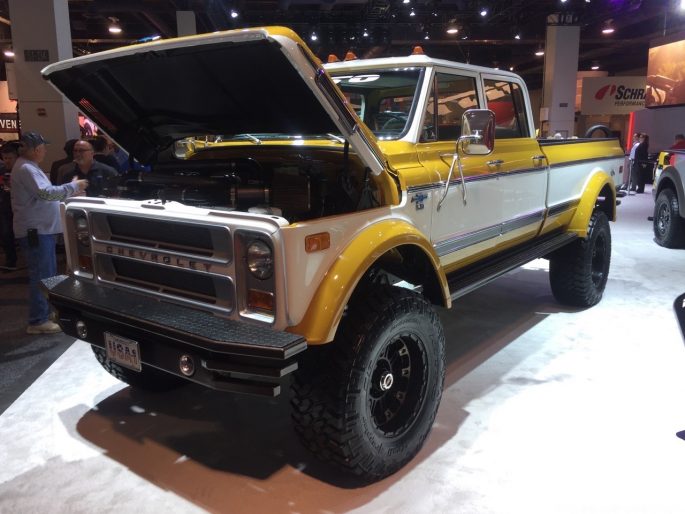 There’s always at least one good vehicle to balance out the cringeworthy offerings in the South Hall, and this Chevy C-50 was it. Is this Lohnes-bait or what? The quick rundown: stretched into a crew cab, modified 2010 GMC seats, 12-valve Cummins, NV4500 five-speed into an NP205 transfer case, and one ton GM axles. The interior and exterior recall the Chevrolet Cheyenne top-line pickups, and I’m willing to bet that the first time Brian saw this thing in person, he whimpered just a little bit. Hell, I did too. No shame there. 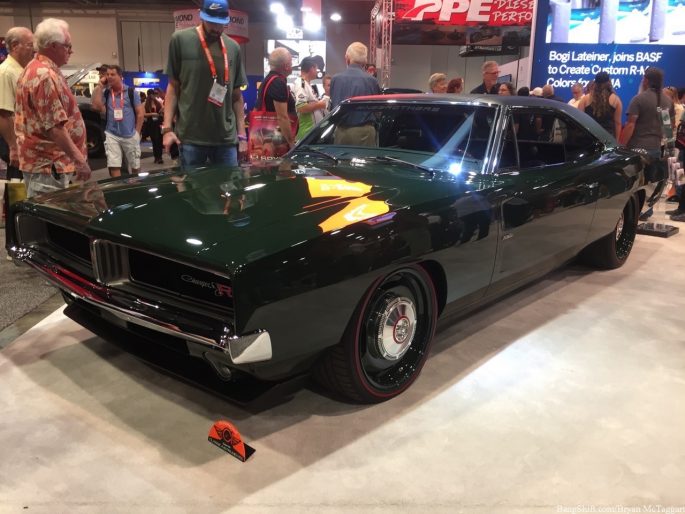 I don’t need an excuse to like a 1969 Dodge Charger, and neither do you, be honest. But what does it take to make the car noteworthy? If you’ve seen one, you’ve seen them all…it’s a problem with Camaros, Mustangs, Chargers, and other very popular cars. That’s where “Defector” shines…at first glance you pick up on the 19″ wheels and modified poverty caps, which itself is a very nice touch, but you have to really look to pick up the details…the longer wheelbase, the shorter trunk, and the slightly modified interior. You know it’s a Charger, and you know it’s a restomod, but beyond the bigger wheels and the 6.4L Hemi swap, you need either a measuring tape or a cheat sheet to know what really went on with this car. 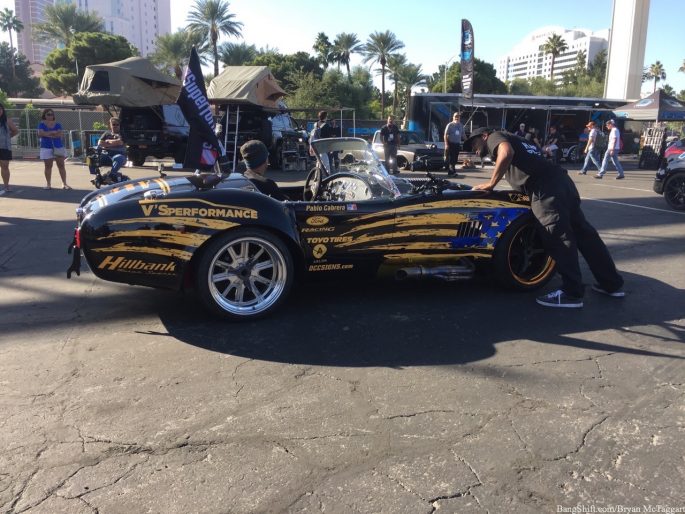 This is the car that finally got me to drop the F-bomb on a live feed. And it was undoubtedly worth it. One of two cars I got to ride in, Cabrera’s driving isn’t so much witchcraft as it is akin to the operator of a cannon: point, make the loud noise and don’t die in the process. This car squeezes expletives out of you like you wouldn’t believe, sounds like Thor’s hammer with each piston stroke (and is about as loud, too) and pirouettes across asphalt with the tires ablaze as if there was any other thing you could do with a Cobra replica. It runs with no hood, uses two bottles of nitrous just to cool it down some, and managed to steal the spotlight from Irish drifter Danielle Murphy and the “standard” 500hp Cobra that were also filling the front lot with smoke. 1,000 horsepower in a car that AC originally only saw fit to offer with a tenth of that number. It’s better than coffee, caffeine or crack. This monster will wake your ass right up, whether you are in the car or just standing nearby. 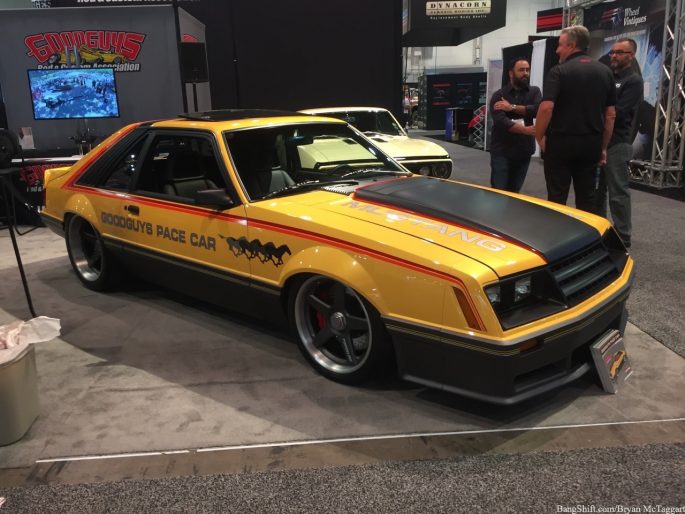 My favorite form of the Fox Body looks like this car: the 1979 Indy Pace Car, the 1980-81 Cobra, and the 1982 GT, complete with that unique front nose clip and the spoiler on the back. It might be the most Malaise of the Fox body Mustangs, but if you are still having trouble putting together a fast Fox in this day and age…well, try gardening. Tape stripes and bright colors worked when the engines sucked, but put some power behind the look, bring the suspension into the 21st century, and you’ve got a jaw-dropper. I kind of felt bad for the really clean 1967 Camaro that had to share a booth with this car, and with Suzy’s Rambler parked just across the aisle…yeah, it was never looked at. 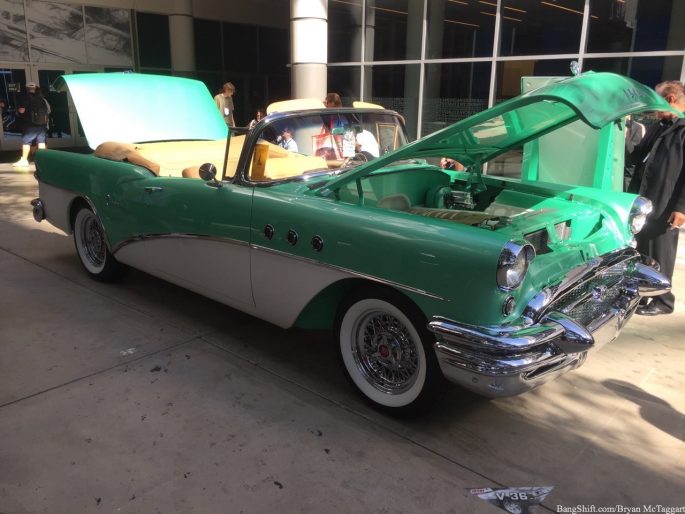 A restomod is normally pretty easy to spot: stock-looking paint, mostly stock-looking interior, upgraded greasy bits and wheels that are a dead giveaway. This Buick is almost anthema to those rules. Stock looking paint, check…great color choice, great shine. Stock looking interior…nope. The Special was trimmed out like a luxury car with great leather. Upgraded greasy bits? Of course…LS3, 4L65E automatic, 9-inch rear axle, power steering, air conditioning, even heated leather seats. Wheels? It’s a 1950s droptop in the correct colors…the wires on whitewalls look is spot-freaking-on. I wanted this car moved away from the Convention Center. I wanted it rolling up and down Las Vegas Boulevard all night long. Every year I find one 1950s car out front that draws me in, and this year this Special was the one. 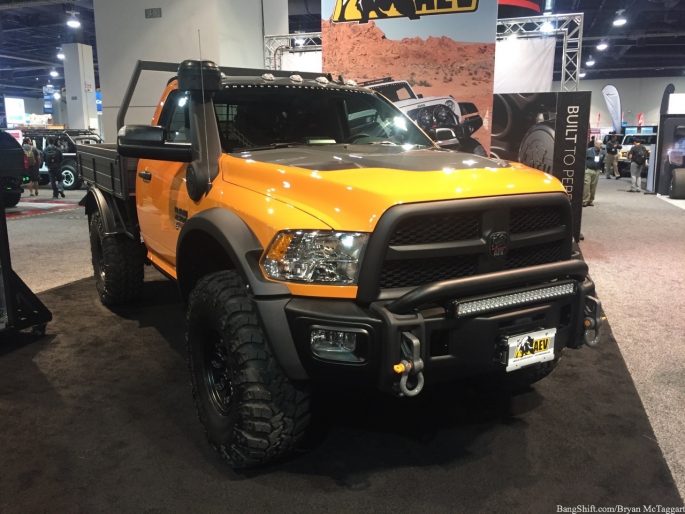 When a Ram 2500 just isn’t burly enough for you, American Expedition Vehicles can hook you up with a Prospector XL. Reaching back into 1980s Dodge truck history for the nameplate, they can kit out your Ram, making it an off-road beast yet still capable of being a daily driver. That’s cool and all, but I wasn’t stopped dead in my tracks over an off-road modified Ram. I was stopped because this was a two-door, flatbed Ram that looks like either the military got a contract for a new CUCV or that some farmer had drawn up the ultimate work truck…which, strangely enough, looks just like my ideal work truck. AEV will make ten of these Prospector XL tray bed types, and I wonder just how much one will cost. Probably mor than the house I live in, but look at this beast… 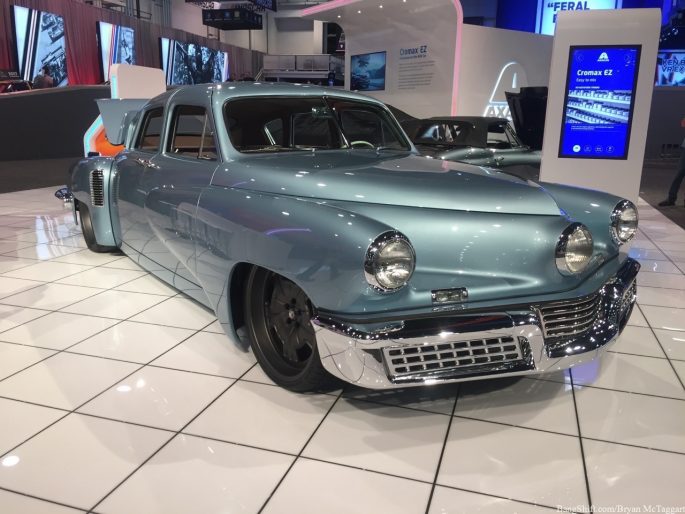 A real-deal Tucker, in person, is like having Bigfoot walk up to you, shake your hand, and offering you a $100 bill. There’s only so many, and every surviving example is treated like gigantic diamonds. If you ever see one go up for auction, you’ll know that they cost about the same. Rob Ida, however, just builds his own. No big deal. It’s packing a mid-mounted Caddy Northstar mill with twin turbochargers, it’s surprisingly large, and it’s faithful to the original Tuckers…Ida was able to get measurements off of a real-deal Tucker and has been working on getting trademarks and assets from the original Tucker Corporation, and in doing so has been working on making replicas, this car being the fourth since 2001. It’s not real, but listening to the reactions of passers-by was a riot all the same.

You Pick it: Want The Ratty and Cool Big Rig Or The Wild Looking Ramp Truck? 2017 AACA Fall Meet Photo Coverage: Some Of The Coolest Restored Cars and Trucks In America Were There!