Unhinged: The eBay Fairlane Trip – What All Was Involved In Getting A 1966 Ford Home! 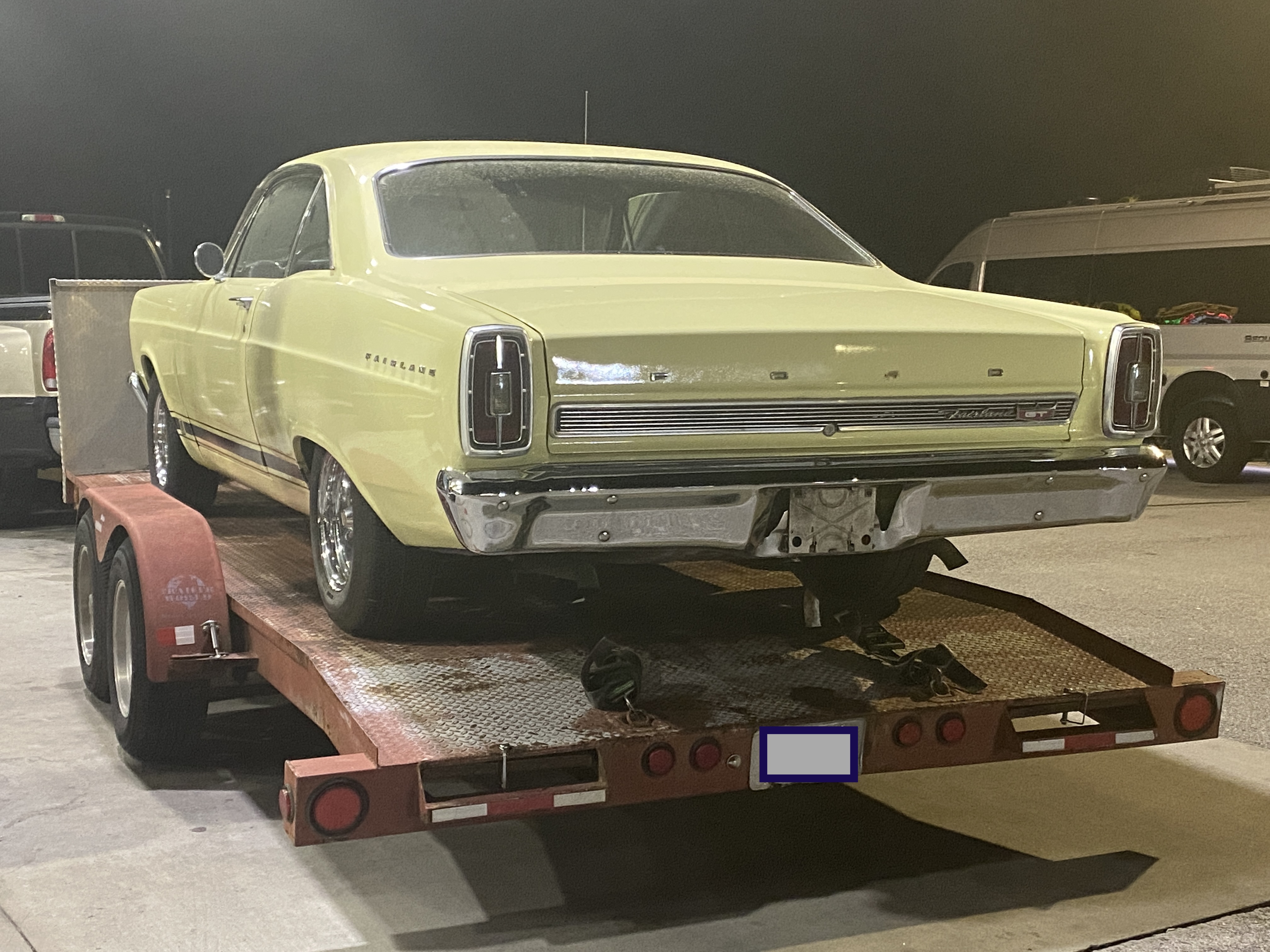 How many years have I spent surfing eBay, dreaming of the day that I would be able to pull the trigger on a car and what would happen once I saw the magical screen that says, “You Won!” Well, this week I got to experience the whole chain of events, from the first bid to the final mile of driving that involved bringing a new prize home because let’s be real…you could ship a vehicle to your house, but you risk your new purchase getting an unintended extra beauty mark (Chad and Mike Finnegan can both give you some recent stories regarding vehicle transport) and you probably want to get ahold of your new prize as soon as possible.

So, the story kicks off Sunday evening, as I’m getting ready to sit down at the computer to get to work. Haley’s uncle Billy pulls into the driveway unannounced, something that doesn’t happen too often. He’s got excitement written all over his face. That’s another thing that doesn’t happen too often. Sparing a huge story, let’s just leave it at the fact that Billy is a huge fan of mid-1960s Ford and has been working on scoring a Fairlane to reach back to one from his past that sorely missed. Since I’ve got an eBay account and understand what I’m looking at, I’m happy to help with the search. We’ve looked at other Fairlanes, but he just hasn’t been quite as happy with what he’s found before. This car, on the other hand, he was all about. 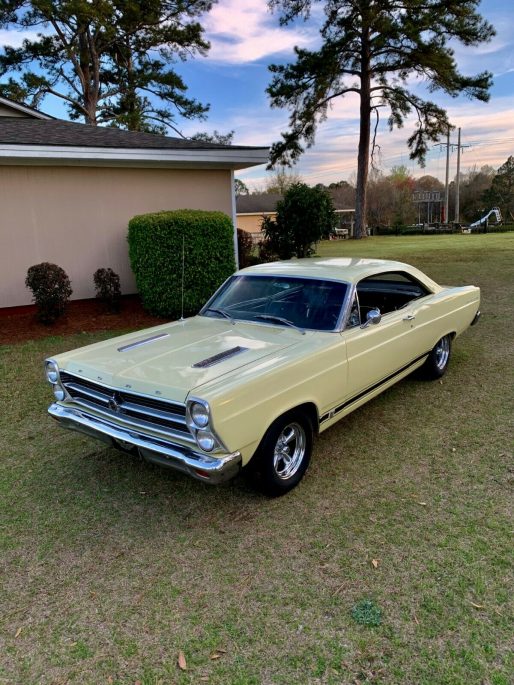 So, let the bidding begin! What do you think a 390-powered 1966 Fairlane GT would go for? $25K? 30K? More? We were both nervous and I was even more nervous seeing the bidding history…one other buyer had taken notice and was placing high bids, hoping to trump any other bidder. We made two advances, and the second one stuck. For the last five minutes I did nothing but hammer the “refresh” button like that was my job, and as soon as the timer went to zero, the screen auto-refreshed and I got the notice: I’d won the auction for a Springtime Yellow 1966 Ford Fairlane 390 GTA. With that bit of good news, we sent the down payment off, and after a phone call, I left Billy and the seller to make the remainder of the financial transaction happen 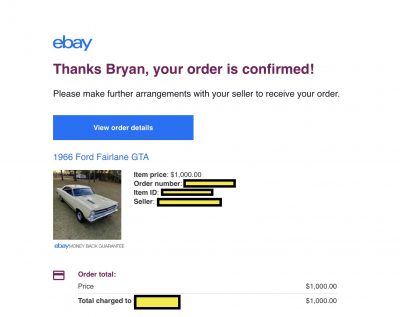 Alright, fast-forward to Wednesday. The buyer has received the remainder of the money and I get a phone call from Billy…would I go with him down to Eastman, Georgia to recover his prize? Eh, why not…viral outbreak or not, I need to get out of the house and outside of the fringe edge of Georgia you trespass on en route to Chattanooga, Tennessee, I haven’t seen much of anything inside the Peach State, so I agree to meet up with Billy and Mike, another of Haley’s uncles, at four in the morning on Thursday to make the run. The thought process: about seven hours there, same back, plus some time to load the car will make for a full day. I notify Brian and Chad about my plans and go to bed at eight in the evening for the first time since I was ten years old so I could guarantee I will be awake at three in the morning to get going.

After an early-morning breakfast and gear-gathering, I load up into the Cruze to go pick up Mike and…it won’t start. Ugh, figures. I shove the car out of the way and wake up the Chrysler. A few minutes later we are all loaded into Billy’s Ford and are on the road. We have fog a better part of the morning and rain until we’re just past Murfreesboro, Tennessee, but we’re making time, stopping every couple of hours for some leg-stretching or a driver change if needed, and after we roll through a fairly clear Atlanta we start getting the final maps ready to the seller’s house. Here is where we have to admit a failure of GPS…it told us to take US-23 south to Eastman, but it failed to inform us of the half-mile of closed road due to a bridge being rebuilt. This required miles of backtracking to Interstate 16 and to a route that led us past Middle Georgia Motorsports Park, but an hour behind schedule, after passing houses with tin roofs and purple-flowered trees for miles upon miles, we had arrived. 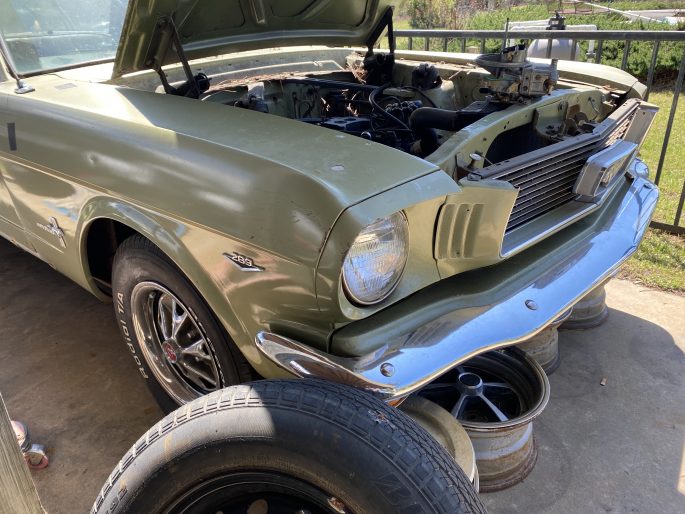 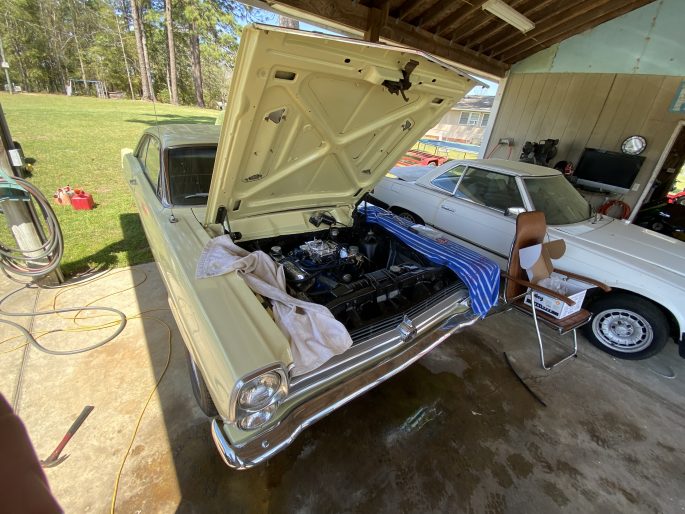 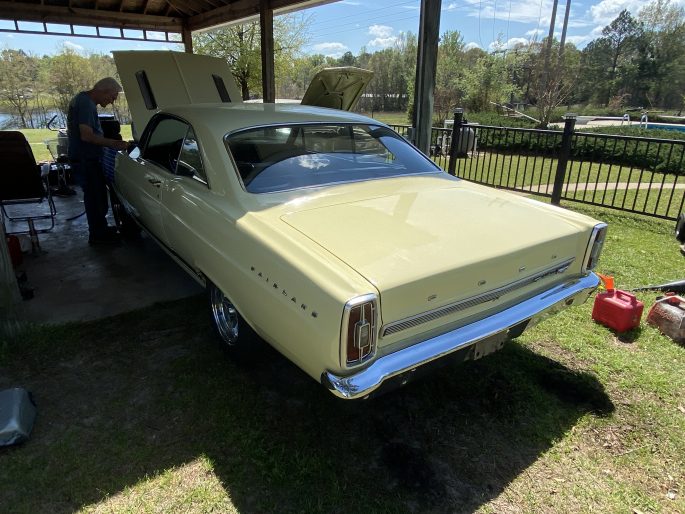 What was I expecting to see? I wasn’t expecting to see a man in his seventies hurriedly swapping on a brand-new Holley carburetor onto the engine under a carport that featured an early model Mustang and a 1970s Mercedes SL, that’s for certain, but at first glances the car represented itself well. Everything matched the photos, plus the wood steering wheel and original 14″ Magnum 500-style wheels were present and accounted for, and after some fiddling with the carburetor linkage, the 390 fired off and settled into a nice, thumping idle. There were some issues, too…one wheelwell had part of the lip rolled, the other had a repair that you could find by a tiny bit of welding wire poking out from the lip, and there was a bubble or two more in the paint than the photo led on. But overall, not a bad driver-quality Fairlane and per the VIN number on the cowl and the tag, we were dealing with a legit GT. That being said, per the tag, this one should’ve been Nightmist Blue. 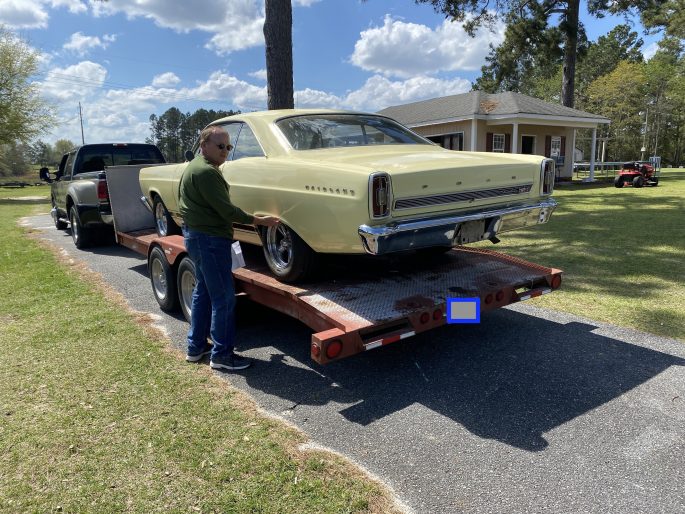 After an hour of locating parts and fixing the funky hood latch, we finally loaded the Fairlane up and following the seller, made our way to the local notary who forever shall be known here as “Miss Jan”, who was nice enough to stamp the paperwork. From there, we went to yet another house. You see, the “seller” was selling by proxy for the owner’s widow. The actual owner was a Fairlane connoisseur, having had five at one point. The yellow one and a red GT in her garage were the last two left, the red one not for sale. We were told that there were more parts to scavenge through, so Billy went to look at them while Mike took interest in an ancient jack at the edge of the garage. 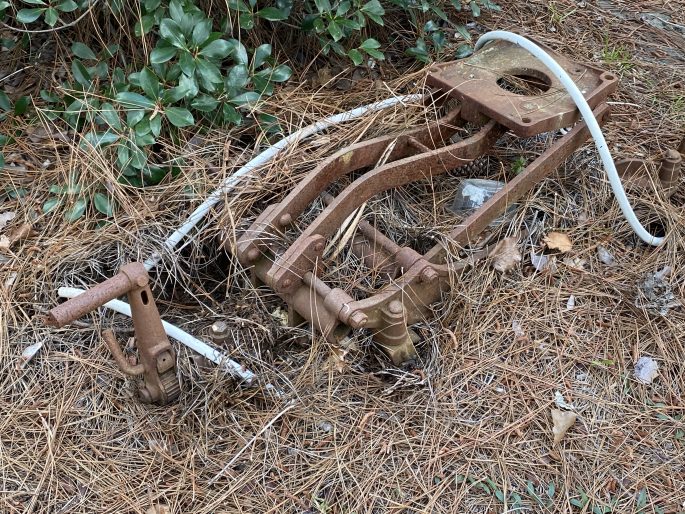 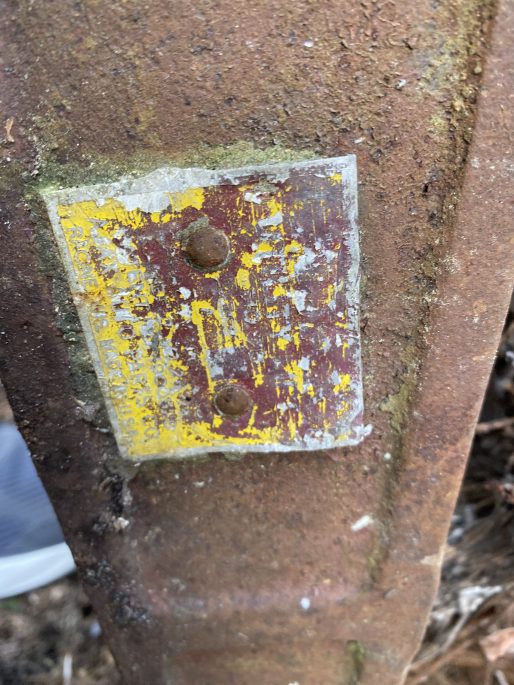 Done parts scavenging, we bid our farewells and made a move we all agreed needed to happen: food. Pushing three in the afternoon, we hadn’t had much but maybe a couple of little chocolate donuts between all of us. We were lucky enough to find a Burger King that was not only open, but were serving inside, so we took up the whole parking lot (nobody was there anyways) and ate our fill before pointing the truck north. From here, the tale is pretty simple: we hit every possible slowdown imaginable between Eastman and home. Atlanta traffic had a couple of slowdown, an interstate blockage in the middle of Chattanooga forced us to drive through town for a bit, and after our final fuel stop about 140 miles from home, I took the driver’s seat of the Super Duty and made tracks. By the time we were in Billy’s front yard, it was nearly midnight, we all were pretty zoned out and after dropping Mike off at home, I made my way to the homestead, pet the cats, kissed the wife and fell into a coma. 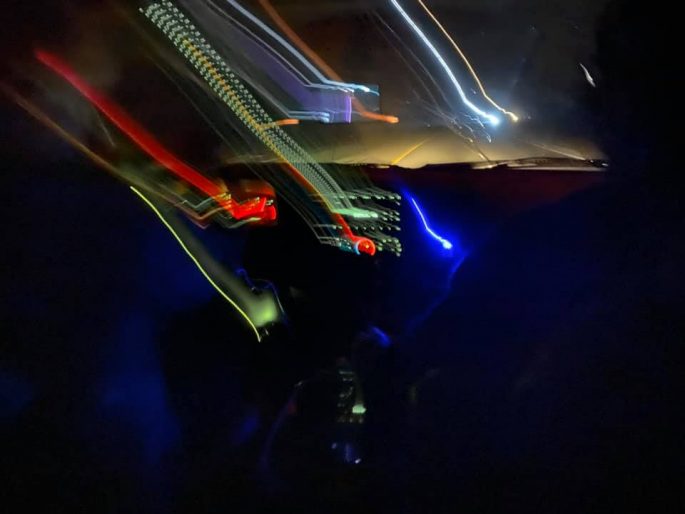 Was all of this necessary? No. Billy could’ve shelled out another $600 or so and have had the Fairlane shipped up to Bowling Green and have been done with it. But besides getting out of the house and turning some miles, we got to meet the widow and learn about the man who loved these cars, see the parts he had, see the shop he built these cars in. We got to hear the Fairlane run and see it drive before we ever loaded it onto a trailer, and had no surprises before we left Eastman. There’s security in that, in my eyes anyways. As for the Fairlane, once it gets a once-over and a set of new tires on the wheels, it’s going to be a sunny-day driver that won’t be messed with too much. At least, that’s what I’ve been told. 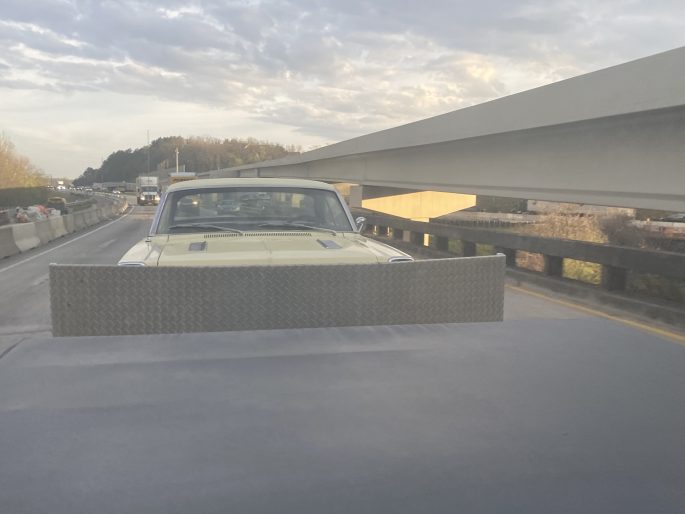 8 thoughts on “Unhinged: The eBay Fairlane Trip – What All Was Involved In Getting A 1966 Ford Home!”