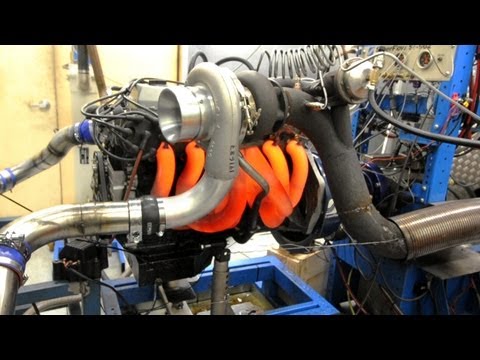 To answer your first question, no, that header is not painted orange. To answer your second question about how a 180ci straight six makes 1250hp, well that one is easy. Lots and lots of glorious boost! We found this video while trolling YouTube and it is pretty bad ass. The engine is a Nissan six cylinder job that is slated for installation in a blazingly fast drag car down under. With a mondo single turbo, it shrieks and screams a pretty glorious note a full song, which is somewhere around 8500rpm according to the video.

Watching the header go from the normal color of stainless steel to day glow orange is super cool, especially during a couple of the pulls with the lights out in the dyno room. The other thing that is truly bitchin’ is watching what happens to the intake plumbing when the turbo spools up and starts to shove all of that atmosphere into the engine. All of the silicone unions in the plumbing expand and move, causing the intercooler itself to shift a few inches during the pulls! Also, in a couple of the different angles you can literally watch the couplers swell up and react to the forces being placed on them by the pressure from the turbo.

We’re V8 guys here to the core, but this is some bad hombre stuff. There’s absolutely no denying that!

Watching This Lego Technic Logging Truck Assemble Itself In Stop Motion Is Oddly Satisfying This Is Awesome: This 1972 Chevrolet Truck vs Ford Truck Film Is Wacky, Destructive, and Perfect