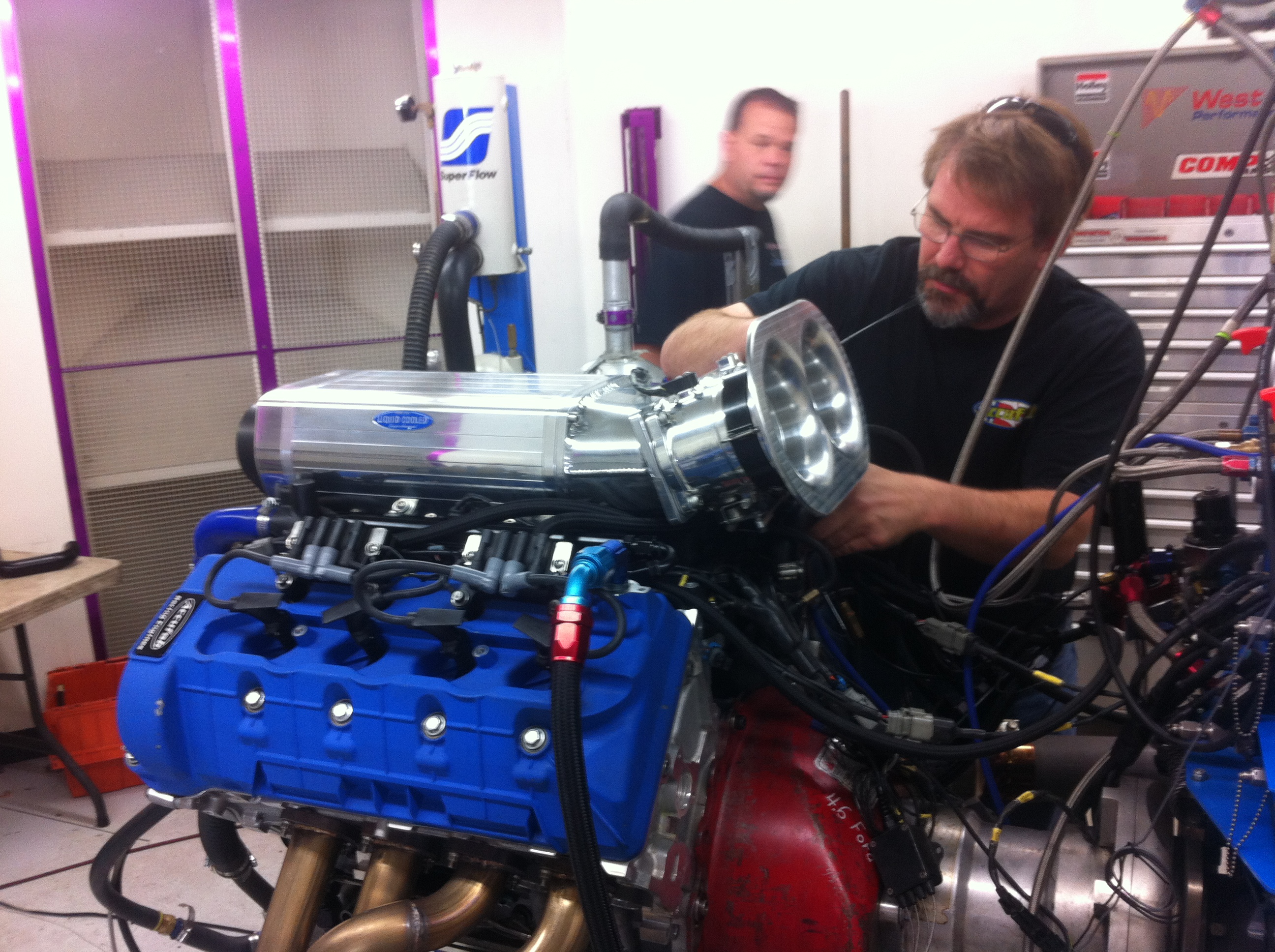 We happened to stroll into Westech Performance Group the other day, and John Mihovetz and the Accufab crew were there testing a 5.4L Cobra Jet Engine. After exchanging the normal “They’ll let anyone in here!” and “Will this Ford actually turn this Superflow Dyno?” comments, we decided to hang out and watch the mod motor gurus do their thing. And oh did they spin the Superflow 902 dyno like 14 mot*&# $%^(#rs.

They were testing a new throttle body setup, and two different Kenne Bell superchargers. Both a 3.6L, which was on the engine when we arrived, and a 4.2L that was bolted on a bit later. We were not given any of the specifics inside the engine other than the fact that we know it has a good rotating assembly, with lots of compression. For safety sake, the testing was being done on alcohol rather than race gas, but the engine will be run on race gas in the car so there will be a remap done to make a happy gas tune. Not a big deal for the Accufab guys. 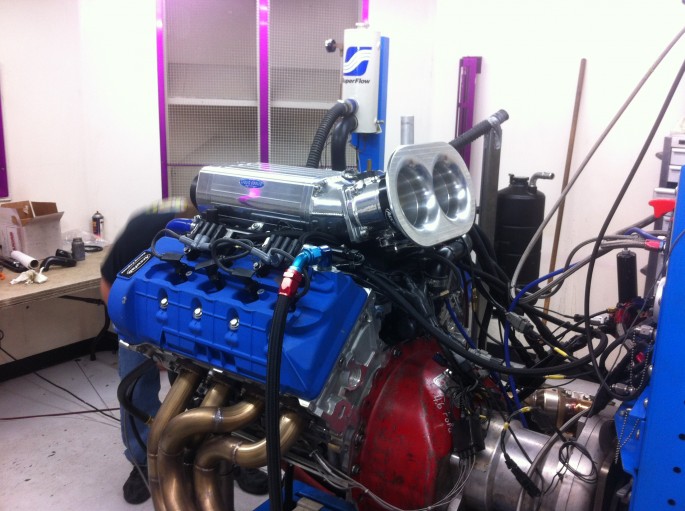 Although this is the "small" 3.6 L blower, note the giant TWIN 105mm Accufab throttle bodies. 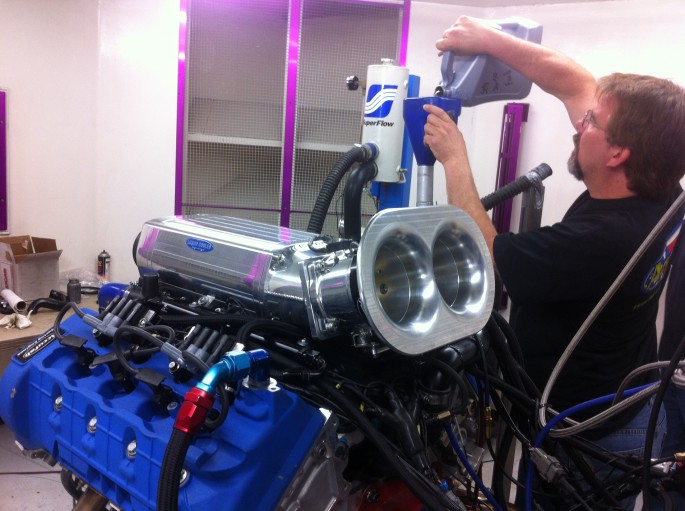 As always, John filled the engine full of Lucas Oil, and then it was time for more pulls. 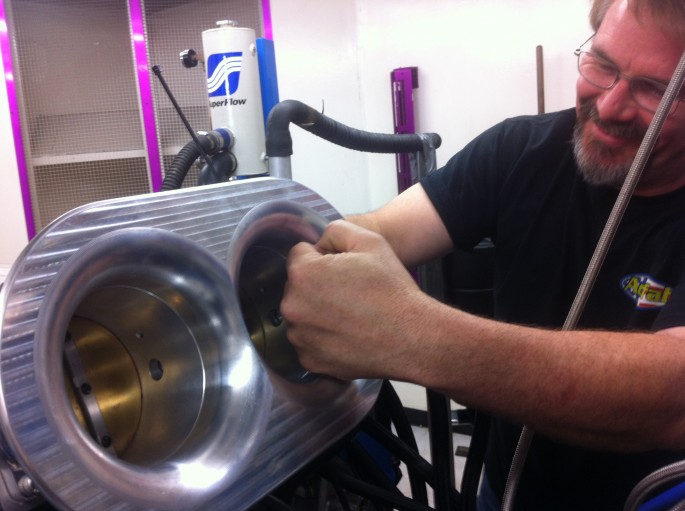 105mm is big enough for almost anyone's hand to fit in. It's awesome to look at these! 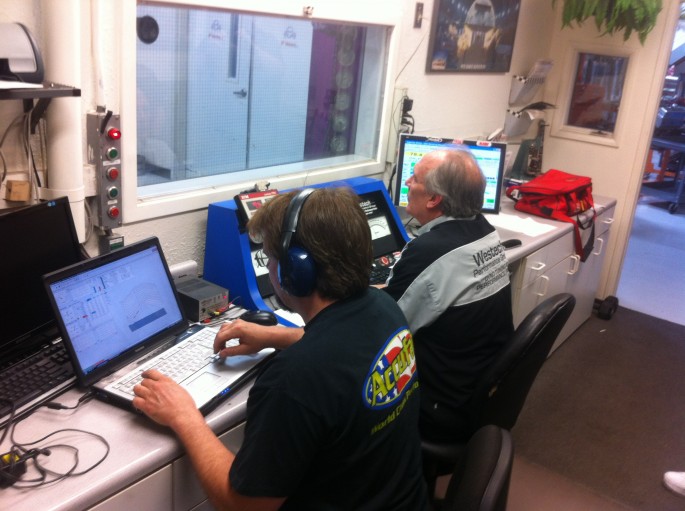 With Steve Brule deftly operating the dyno, and John Mihovetz tapping keys on the laptop, this mod motor is about to make some real steam.

After some tweaking, and tuning, and some more tweaks, the 3.6L supercharger was pushed for it’s final pull. How’s 1493.7 horsepower sound? Really really good actually. And this is with the small blower! 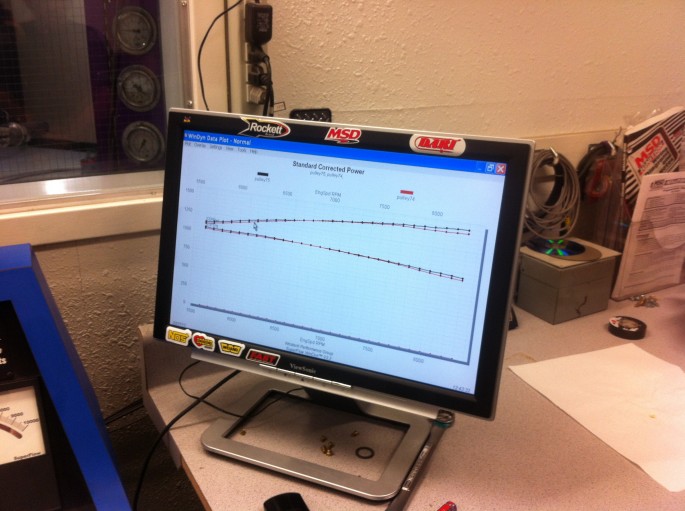 Now it was time to change over to the big blower and also change the pulley so that the big blower would be making close to the same power as the small blower. This way John and crew could look at the tune, see where adjustments needed to be made, and then start making even more power. 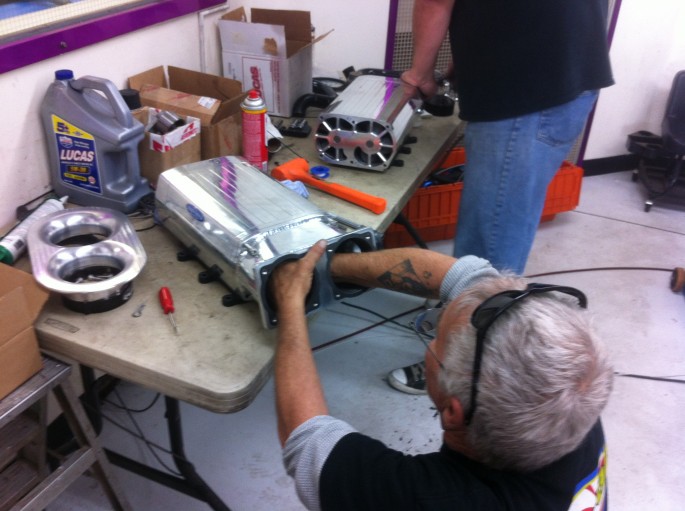 The throttle bodies and housing being removed from little blower so they can go on the big one at the other end of the table.

The big 4.2L supercharger is longer than the 3.6L, and that was all we could get out of them. Looking at the inlets and such, it looks the same to us, but we didn’t get to measure case bore or any of that. We know it’s bigger, and bigger means more ability to compress even more air so that means more airflow into the engine. If you provide the fuel and spark it needs, this will make more and more power. Keep in mind, none of these pulls so far were big glory runs. 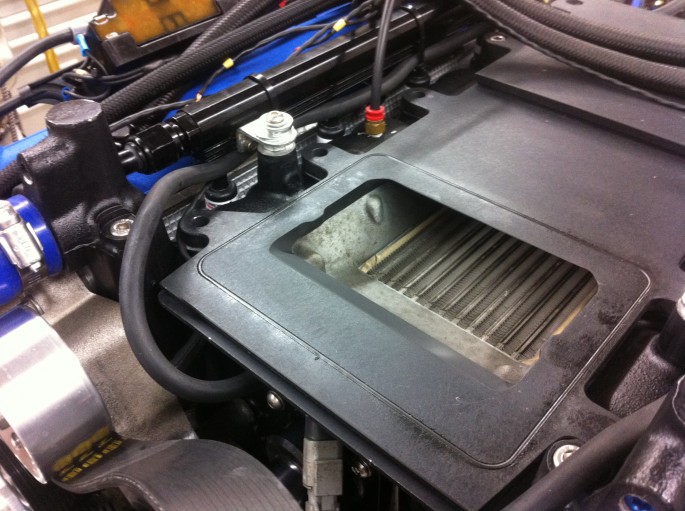 Note the relatively small inlet from the supercharger into the "intercooler" before it goes into the cylinders. 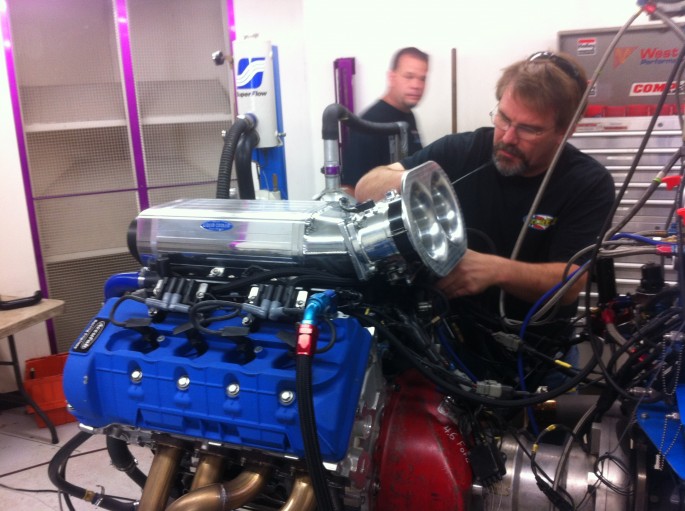 With the new 4.2L Kenne Bell supercharger installed, and a linkage all setup for the twin 105mm Accufab throttle bodies, it was time to check for fuel leaks and fire this sucker back up. 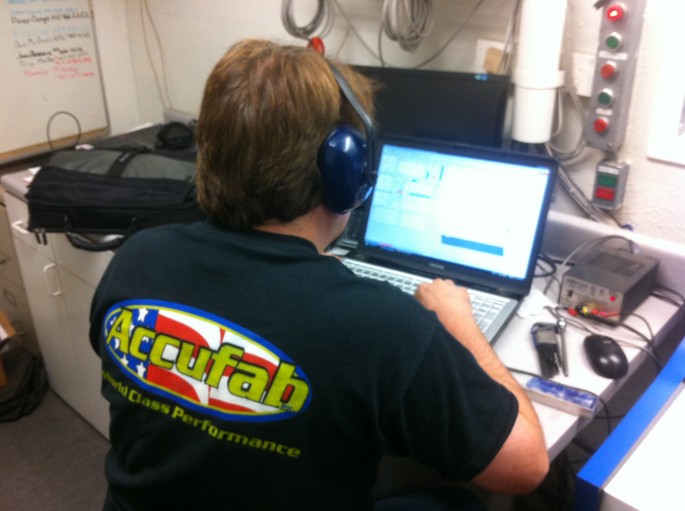 A few more tweaks and it was time to make some big power. Pissed off doesn't begin to describe this engine.

After the tweaks, we made 3 pulls with the big blower. That’s it. The first one made around 1470 horsepower with very conservative tune parameters and only spinning it to 7500 rpm or so. The second pull, after a few tweaks on the Motec by John, was 1571 hp and 1039 tq. That’s when things got interesting. At this point Jim “Kenne” Bell starts counting out money from his pockets and ends up putting $1000 cash on the table next to John’s computer. He said “Make 1600 on this pull and it’s yours!” We all laughed, and John said “We’ll see” in his normal quiet deep voice and then started tapping keys. With a smirk he told Steve to make the pull, and then let her rip. It made 1600+. How much more? You’ll have to watch the video below to find out.

Chad’s Note: There is at least 200 hp left in this combo if you wanted to be stupid and just race a dyno. There was never a point at which Steve or John were pushing this engine to a point where it was “unhappy”. Which is good, cause it’ belongs to one of Accufab’s customers. I say this only to make the point that this wasn’t a one time pull that can never be repeated. I’m not a mod motor fan AT ALL, but this is an impressive piece, and all of the Accufab gang should be proud of what they put together. Also congrats to the staff at Kenne Bell for making big power and proving once again that their superchargers flat kick ass.