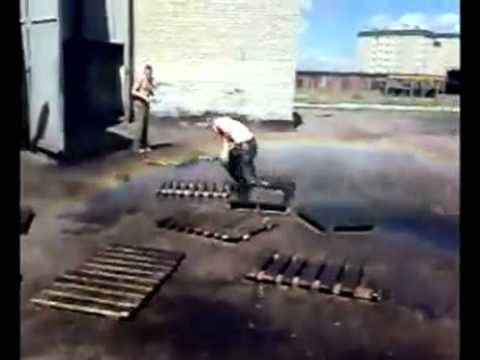 Once again, our electronic travels take us back to Russia, the land of crashing dash cam cars, insane river fording tractors, and the most painful pranks on planet Earth. We’ve all seen the video of the drunk guy getting launched into the ceiling of a garage by a hidden exploding air bag under his seat and frankly not much is going to top that for sheer pain and shock, but this one is pretty close.

To set the scene we have three Russian army guys, we guess army due to the camo pants they have one. The three men are sitting on the cab of what looks to be a Russian ZiL fire truck. This is most likely a 6×6 truck with a pretty big diesel engine in it. These trucks are built to survive Russian life, if that gives you an indication of their robust construction.

Anywho, the member of the trio on the far right seems to be in on the gag as he gingerly shifts to one side while the other two guys just look around apparently waiting for something to happen. Well, something certainly happens.

Ever been shot by a high pressure water cannon at point blank range? There are at least two guys in Russia who can say yes to that question now. The distance of one man’s flight and the harshness of his landing had us watching this thing through one squinted eye. Good thing that wooden pallet was there to catch him. Yikes!

How the hell do you get back at someone for doing THIS to you?!

Question of the Day: What is Your Wildest Automotive Fantasy? Is a California General Contractor Really Building a 2,000mph LSR Car?