Porsche Wreckage – Watch A Porsche 964 Blast Thorough Barriers and Fly Into A Canal! 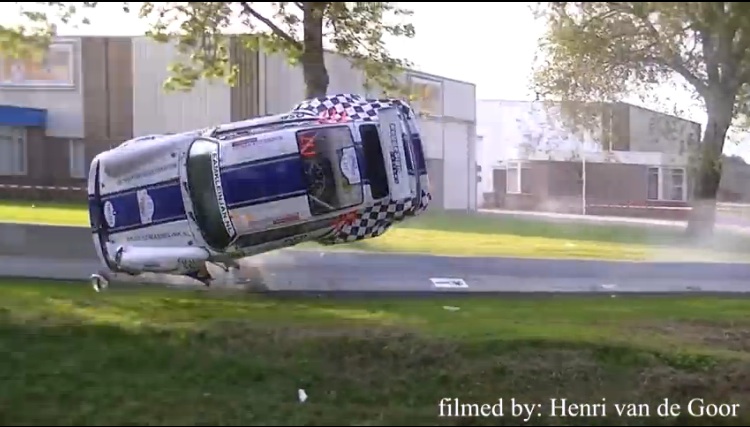 For more than 30 years the Hellendoorn Rally has been contested in the Netherlands and 2013 was no different. There was plenty of hard racing by lots of neat and interesting cars but frankly all of that paled in comparison to the absolutely wild wreck suffered by the driver and co-driver in this Porsche 964 that you will see below. It is unclear as to what caused the driver to accelerate way too deep into the left hand corner and then go all Dukes of Hazzard with his race car. Navigator behind on the notes? Operator error? Only the two guys who got the frequent flyer miles really can know.

When you see the car come around the corner and the driver gets hard on the gas, grabs a gear or two it doesn’t look like a whole lot is out of place. Shortly after grabbing that last gear, the driver goes clutch and brake to the floor while giving the Porsche full right rudder to avoid the inevitable. Despite his best efforts the car absolutely nails the concrete barriers placed to stop cars from ending up in a canal. He hits them so hard and at such an angle that the car is launched like it was on a ramp. The Porsche flies over the other barriers and lands directly into the water, upside down.

The video cuts out about four seconds after the car becomes a submarine but the two guys closest to the camera seem to be interested in their phones more so than the guys who may or may not be dying in the canal. We’re not saying it is shocking that someone hadn’t jumped in to help after four seconds, but you’ve seen the drag race and mud bog videos we’ve run. There are dudes swarming cars about the time they stop moving so the “slow” reaction may be worth noting.

We believe that both the driver and co-driver were able to escape without serious injury.

PRESS PLAY BELOW TO SEE A TRULY WILD WRECK FROM THE NETHERLANDS!

Rough Start: 1978 Dodge Motorhome....Why Does It Look Bagged In This Picture?! Morning Symphony: Man And Bike Versus Gravity And The Earth