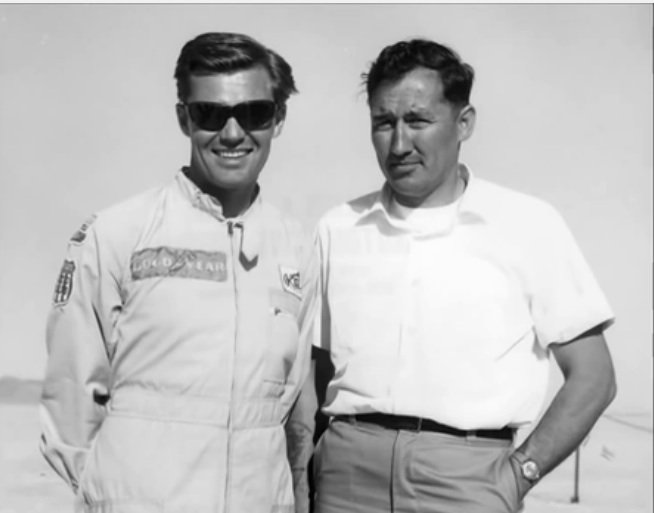 We show lots of old videos here on BangShift and some of them are silent. I normally am not too busted about that because the moving pictures are so compelling to look at you can get around the lack of sound. This video is the opposite of that. Posted by Samuel Hawley the author of the must read book Speed Duel that tracks the amazing battle fought between Arfons and Breedlove for sole ownership of the land speed record, the main attraction is the sound. The video itself features a bunch of cool photos but the sound is amazing. You’ll hear period interviews with Breedlove where he talks of a conversation between he and Arfons that basically went like this, “Hey, is there an end to this or are we going to keep going until one of us is dead?”

You’ll actually hear Breedlove’s run and the sound the Spirit Of America made streaking by the timing trailer at 500mph. You’ll also hear said timing officials screaming at a guy to get off the track. The most heart stopping and compelling audio in the deal comes near the end and it is the raw sound of Art Arfons crew pulling up to the wrecked Green Monster after Art wrecked it at 605mph (or so). Obviously Art survived but the scene was one of total disaster. You’ll hear grown men crying and literally afraid to even step out of the car they were in to look for Art or survey the site.

Coolness! Check Out This Episode Of The Long Forgotten "Pro Drag Superstars" TV Show From 1985 Satellite Launch: Digging A Long-Dead Plymouth Out Of It's Grave!

One thought on “Amazing Historical Video: Listen To Amazing Audio From Breedlove and Arfons During Their 1960s Land Speed Duel – Incredible Peek Into History”