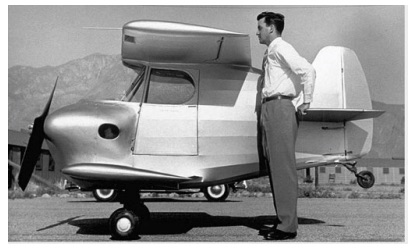 Avid fans of aviation history know the name Ray Stits but we’re guessing lots of you out there in reader-land don’t and that’s OK. We’re here to give you some education on a guy who thoroughly exemplified the “just do it” spirit of the 1950s in the best way possible, by building awesome but potentially dangerous stuff that ended up working and setting world records. He did this as an airplane mechanic and a self taught aeronautical engineer. His buddy (and later his rival) Bob Starr was the pilot for the Stits creations and happily he lived through it all long enough to build a miniature plane of his own in the 1980s, which crashed and nearly killed him. We could literally write 10,000 words about how cool Stits and his planes were and are, but we’ll try to give you the quick and dirty story and the video to actually watch one of these planes flying is posted below. 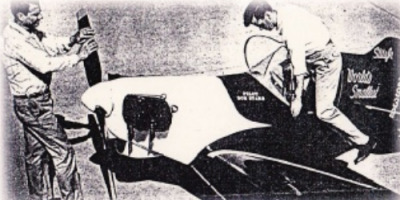 We’re not sure what caused Ray Stits to focus in on building the world’s smallest functional airplanes, but he sure did and built his first craft, called the Stits Jr in 1948. This was a miniscule airplane but amazingly, it was the biggest of the miniatures he produced (Stits was also involved with the production of some full sized aircraft as well). With a wingspan of 8′ 10″ and a total length of 11′ the airplane weighed only 398lbs without a pilot wedged into its 16″ wide cockpit. The 85hp Continental engine powered the airplane to speeds of up to 170mph and Bob Starr flew it some 3,300ft in the sky during several test flights. The creepy fact is that the plane only had a gas tank that held 4.5 gallons. It had a takeoff speed of 60mph.

The brake on the tail wheel was from a bicycle, the fuselage was made from cast off pieces of full sized plane fuselage. The prop was custom made and 60″ in diameter. A company in Ohio took the job probably demanding payment up front because they didn’t expect any more calls after the maiden flight. Why didn’t Stits fly it? He was too heavy at 180lbs. Bob Starr was just right at 160 and with P51 wartime experience, crop dusting experience, and lots of airs show flying, he was the right man for the job.

This plane was a major draw at air shows and Starr flew it in all kinds of conditions, reportedly even dead stick landing it once after an engine failure. Woah! Believe it or not, this was just the opening act for Ray Stits. 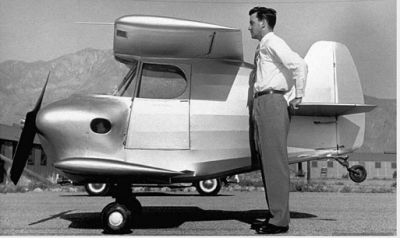 After lots of successful flying in the Junior, Stits decided that he needed to outdo himself and set to work on a new tiny plane, even smaller than the first. Dubbed the “Sky Baby”, this plane became the world’s smallest in 1952 when Bob Starr took it to the skies. The wingspan shrunk to 7’2″ and the length shrunk to 9’10”. The plane was taller, standing an even 5′ in height and it was powered by an 85hp Continental like the previous machine. Top speed for the bi-plane was tagged at 185mph and it carried a much larger (har har) 5-gallon fuel tank.

Construction was steel tubing and fabric for the fuselage and wood wings also covered in fabric. With Bob Starr aboard, the plane weighed in at a creep-tastic 666lbs. According to Starr’s reports of flying the machine at the time, he locked his arm and used two fingers to move the stick., which only had about 3-inches of travel from one side to the other. Things were so tight in the plane that when the pilot pressed his foot to turn the rudder fully one way or the other, his toes were 3-4″ away from the spinning prop! Starr apparently got the plane up to 210 after a shallow dive! Balls of steel and talent to match!

(We could go on from here about the plane that Starr built in the early 1980s and crashed and then we could talk about the Baby Bird that Don Stits (Ray’s son) built in 1987 to recapture the “world’s smallest” title, but we’ll save those stories for another day and leave you with actual video of the Sky Baby doing what it did in front of media and crowds for about six months in 1952…fly. The plane is now owned by the Smithsonian and is on display at the aviation museum in Oshkosh, Wisconsin.

Parade Lap? Hell No - Ride In This Insane Caterham As It Assaults The Hill At The Goodwood Festival Of Speed Skill Level 3: Reviving A Dodge Ramcharger That's In Pieces