Retro Clip: The Final Race Scene From “King Of The Mountain”…Porsche Versus Corvette On Mulholland Drive 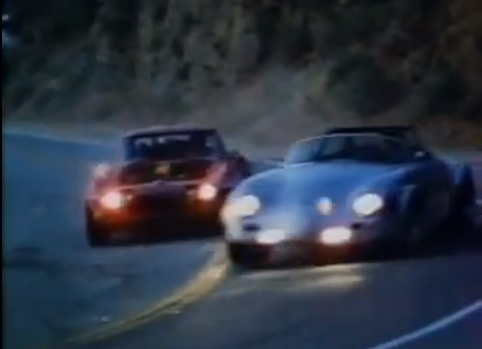 As soon as I saw the thumbnail picture for this YouTube clip, I knew I had to watch it. There’s something about a ragged out 1960’s Corvette, hoodless, on slot mags and with primer spots, that seems so wrong that it works beautifully in my eyes. By contrast, the Porsche on Centerline Autodrags and BFG’s looks…well, I’ll be honest, until I saw the nose of the car I could’ve sworn I was going to see some British sports car I hadn’t seen before, probably because I’m not used to seeing a Porsche 356 on mag wheels. I’m unfamiliar enough with this movie, 1981’s “King Of The Mountain”, that I can only go by what IMDB.com can tell me…which, for all intents and purposes, is a young-pup-takes-on-old-dog story based upon racing Mulholland Drive in California. All I know is that Dennis Hopper plays Cal, the ‘Vette driver who must be rolling on some very good coke, and Harry Hamlin plays the straight-laced Steve in the Porsche. After that, it’s the cars and the road, and you can see from some of the aerial shots that whoever was actually driving these cars were earning their pay…several times you’ll see a tire dip off into the road or the car get a little sideways. This movie has been added to the watch list, if only for the cars. I apologize for the knowledge, but take into consideration that this movie is older than me by two years and until five minutes ago, I’d never even heard of it. I will fix that situation soon.

Classic YouTube: "Winning In Style", The Story Of Austin-Rover's Motorsports Activities In The 1980s Holley LS Fest X: The Show Fields, From The Sweet To The Suicidal

2 thoughts on “Retro Clip: The Final Race Scene From “King Of The Mountain”…Porsche Versus Corvette On Mulholland Drive”