Still Tippin’: The Story Of The Slandering Of The Suzuki Samurai 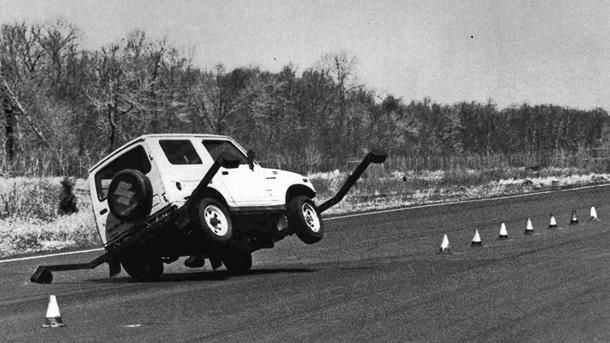 It’s one of the strangest trends I’ve seen since I moved out to the midwest: just how many people not only appreciate small SUVs like Geo Trackers, Suzuki Vitaras and the like, but how out of their way they will go to find, keep and restore one. If you say that there’s a clean Tracker somewhere, the buyers come out of the trees like some kind of freaky sci-fi movie, cash in hand as long as it runs. Why do they like these little four-by-fours so much? They are light, they are nimble, they are capable and they are reasonably good on fuel economy. They don’t sink like a K10, they don’t drink like a Ford and they will run rings around a Dodge on a trail without even trying. Snow? Perfect. Mud? Just keep your foot in it for the majority of what anyone would normally wind up in. As long as the heater and wipers work, all is well.

What isn’t well is that the current generation of Suzuki Jimny isn’t available in the United States market. Nor will it ever be. Suzuki packed out a few years back and the Jimny/Samurai lineup was gone by 1995, thanks to “testing” that was more about seeing the vehicle roll over no matter what, regardless of whether or not the actual test was modified from it’s original form. Yeah, that happened. So did a lawsuit. And funny enough, Suzuki wasn’t the only manufacturer to get hammered in this manner…Isuzu’s Trooper was also targeted by the Consumer Reports team in similar form, and just like Suzuki, what had been a fantastic seller was now tarnished in the public eye.

2 thoughts on “Still Tippin’: The Story Of The Slandering Of The Suzuki Samurai”