Video: A New And Bombproof Version Of The Old “Lightning Rods” Shifter! This Thing Is Bad To The Bone – DO WANT! 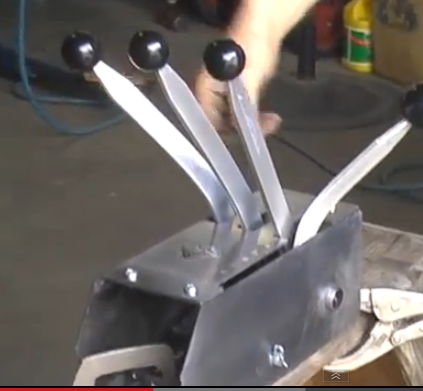 We’ve run a bunch of stuff on the old 1980s era Hurst Lightning Rods shifter that was available in the Hurst Olds production car and over the counter from your local speed shop. It gave the Lenco look with the ease of an overdrive automatic and when we were kids, they were the hot ticket. Because of a couple factors the production run on that particular unit was pretty short. Lightning Rods now fetch HUGE money when they can even be found on places like eBay or at swap meets where they are inevitably missing pieces which are harder to find than the actual shifter itself. Right now on eBay listings range from $900 (for what seem to be incomplete shifters to $2,000 for a totally complete shifter set. That is insane.

Enter the madcap geniuses at Kilduff Machine. These guys have been making cool shifters for several years now but this is their masterwork. Basically they took the Lightning Rods concept and beefed it by about 50-times its original strength and attitude. In all honesty, this could be the coolest overdrive automatic shifter ever. Wait until you see it in operation and when you get a sneak peek at the guts of the unit. Your car could be hit with a bazooka round and this shifter would still be sitting proudly (and functionally) at attention.

As you’ll see in the video, you can set the thing in D and just roll like normal or you can pull the main lever all the way down, which engages the bad-assery of the Lightning Rods. Unlike the original shifter you pull these levers back, just like a Lenco. Lightning Rods from Hurst had a pushing motion and while cool, didn’t have the industrial grade look that this mother does. The dude from Kilduff demonstrates the shifter several times, but he had us at hello. We don’t know what it costs, but we know that we want one of these setups for Project Buford T Justice….BAD!

PRESS PLAY BELOW TO SEE THE NEATEST AUTOMATIC SHIFTER WE’VE SEEN IN AGES…MAYBE EVER!

12 thoughts on “Video: A New And Bombproof Version Of The Old “Lightning Rods” Shifter! This Thing Is Bad To The Bone – DO WANT!”