Videos: The Motorcycle Engined Mini-Slingshot Hits The Dyno And A Clandestine Testing Location In England! 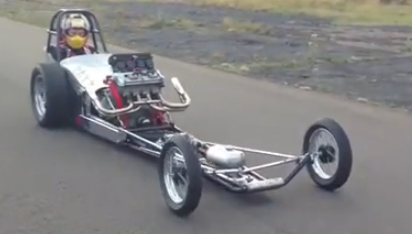 The Postman Pat guys have their new tiny slingshot dragster pretty well sorted out and are making final prep to get the car onto a drag strip asap. These two videos below show the car running at a seemingly abandoned testing strip somewhere in England and it shows the miniature slingshot on the dyno rollers getting tuned up and ready to hammer full sized competition. The bike engine should make about 130hp or so and the whole car can’t weigh but 500-600lbs with the driver in it. It should really make some hay on the drag strip and lay virtual waste to stock and mildly modified street cars. We’re thinking it’ll definitely beat the pants off of the Postman Pat van, which we still totally love and have silently vowed to make a pass down an English strip with some day (Hey, Tom…you listening!?). We’ve showed you videos and stills of this thing coming together and not to be repetitive, but the way they routed the headers, built the chassis, and set the car up totally rules. This is an honestly brilliant idea for a budget slingshot class. Allow different makes of motors so long as they are all the same size and let’em go after one another heads up on the quarter mile. Big time fun!

Here’s the first video of the car being launched and “shaken down” on some abandoned forlorn road in England somewhere.

Here’s the second video of the car being dyno tuned on the rollers. It sounds SWEET at the top of the RPM range.

Video: Bringing An Old Army Truck Back To Life And Four Wheeling It In Alabama - Dirt Every Day! Insane: This Is The Craziest Drag Racing Promotion We Have Ever Seen - A Pro Drag Race In Cuba With A Million Dollar Purse

6 thoughts on “Videos: The Motorcycle Engined Mini-Slingshot Hits The Dyno And A Clandestine Testing Location In England!”