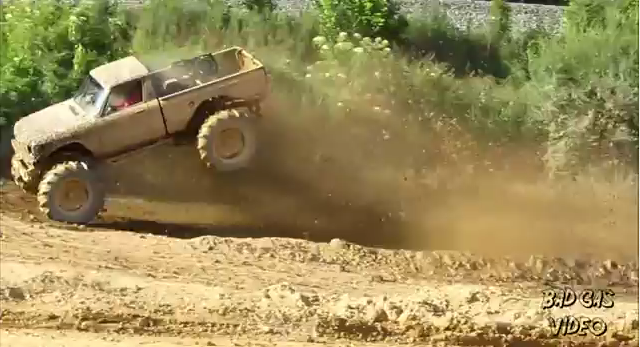 Owning a gnarly truck that rolls around on tractor tires is definitely on my “to do” list and after watching this video, it will probably be on yours too. What you’ll see is an old battle hardened Chevy LUV truck that is up on huge axles, sounds as though it has a big block for power, and most importantly, has those tall skinny tractor tires that I love on the corners. The truck is competing in a “mud bog” competition that is more like an obstacle course/trophy truck course with jumps, turns, and high speeds.

Much like Pro Touring enthusiasts have influenced the hot rodding world by bringing autocross competitions and other elements back into the fold, these big trucks that were once only good and crawling through deep pits of gooey gumbo are now morphing into multi-purpose race trucks that are capable of doing some pretty wild stuff. The fact that this truck survives the near roll about 10 seconds into the video and doesn’t throw driveline parts all over the ground is saying something. Years ago, a truck like this would have never lived through that type of violence with all four wheels intact!