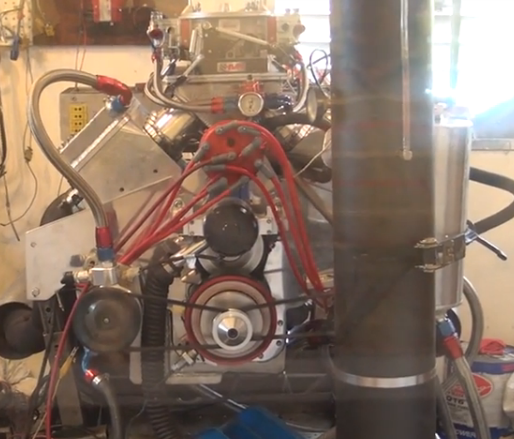 We use the term Pontiac here with a bit of a wink because the engine you are about to see make some big power on the dyno does not have a single stock Pontiac part in it. What it does have it is a K&M Perofmance MR-1A aluminum block, Kauffman Racing Engines wild Warp 6 heads, a sheetmetal intake, a pair of mondo carbs, probably a billet crank, and some really tough connecting rods and pistons. The 428ci displacement is actually pretty small for this block as we have seen combos well over 500ci built out of these. The good news is that what this thing lacks in physical displacement, it makes up for it in revs and that means some totally sweet dyno noise.

Noted Pontiac engine builder Kaufmann Racing Engines is responsible for the construction of this engine and the notes on the video say that the motor eclipsed 1,000hp at 9,500 RPM. That is impressive stuff and it sure speaks to the effectiveness of the parts involved. This is probably one of the more extreme naturally aspirated Pontiac engines out there and after this testing the word is that this engine landed in an old Pontiac station wagon drag car. How neat is that?

While this engine doesn’t stand as a budget build by any means, we still love it. There’s proof that you can make stupid power with the brand of your choice if you want, even if the parts of the brand of your choice aren’t technically in the engine. The platform is close enough and we have no qualms about calling this a Pontiac.. Anyone who thinks that a stock Pontiac engine could see 9,800 RPM probably could not ID one anyway!

Go Time: Hear The Hagerty Buick Straight Eight Fire Up And Run, Watch The Whole Build In Time Lapse! Ever Wonder What It Would Look Like If An Underground Tank At A Gas Station Blew Up? Watch This