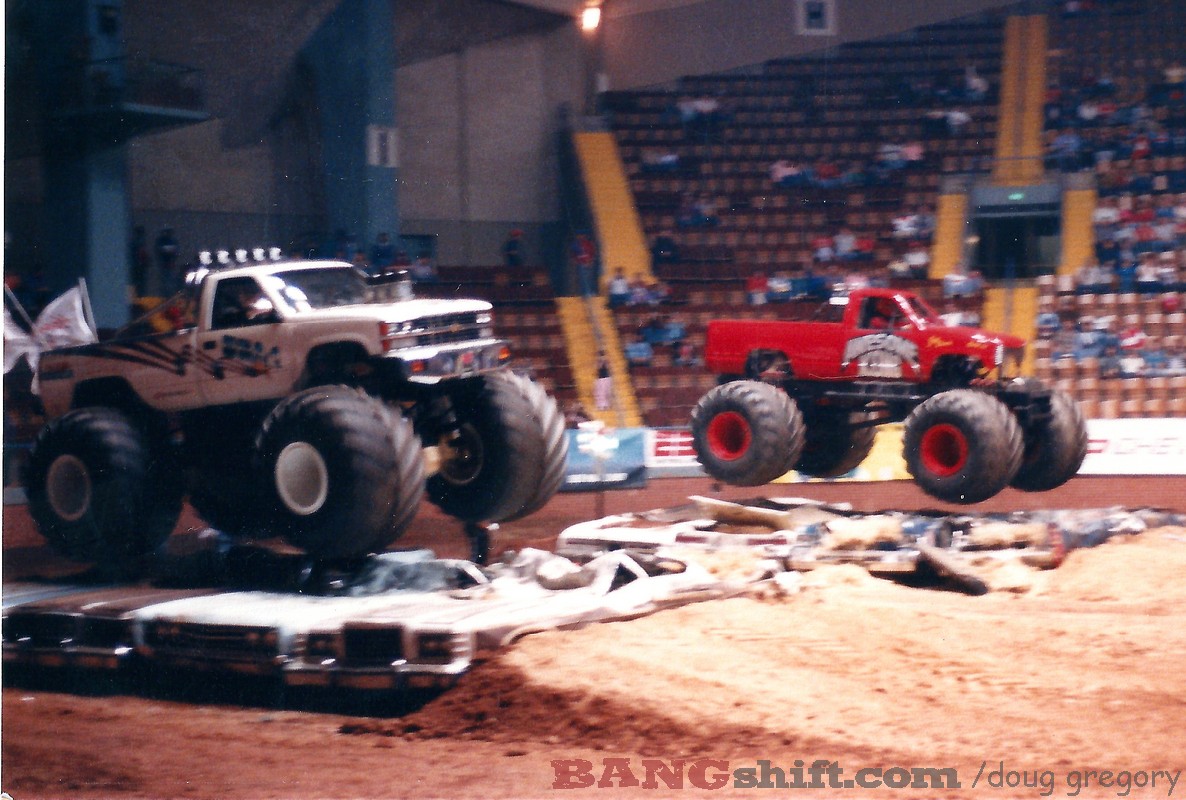 (Words and photos by Doug Gregory) – This series of articles featuring events I attended  mid-1980s and into the 21st century, but most the photos you’ll see in this series were taken in the 80s and early 90s.  These events were captured on digital, SLR, and even a disc camera from venues in Alabama, Kentucky, Nebraska, and Oklahoma.  The dominant arena for Alabama was Garrett Coliseum in Montgomery.  This particular event was held in 1988 or 1989.  Someone had to tell me that because I’d forgotten exactly when I took these.  Monster truck racing was evolving and you had everything from full-tilt race stuff to show rigs making up the field.  I don’t really consider the suspension on most from this era to be considered ‘sprung’.  I’m pretty sure the ‘springs’ were cast iron and the shocks mostly there for decoration.  Tire pressures seemed to be the best way to soften the blow as these 12,000lb hulks crashed down to earth.  How any of the drivers kept their spine intact is beyond me.

I do not remember every driver, truck, or even the results, but some memories has managed to linger the 25+ years that have elapsed.  The Overtime GMC of Chandler Lloyd seemed to have lost its brakes after the second set of cars and as he aimed the rig out the door a rear wheel hit the concrete column resulting in a loud ‘thud’ followed by dust falling from the ceiling.  Jeff Dane’s Awesome Kong, driven by Steve Dane, was running the lowest tire pressures I’d ever seen in a terra tire.  I had no idea they’d wad up like that.  Jim Kramer was there wheeling Bigfoot as was Rod Litzau herding Everett Jasmer’s USA-1 Chevy.  Nick Rossi was at the helm of his Jersey Outlaw Ford.  Dennis Anderson drive his ’51 Ford panel up to and past its limits which we now know is quite normal for him.  The King Kong Ford, raced by Steve Cain, was running hard out of the Jeff Dane stable.  Dave Wieczorek’s Nite Life II Chevy step-side looked completely like a show rig with hydraulic tilting hood and bed along with about a thousand pounds of chrome.  However, it really held its own and looked awesome doing it.  Jon Moore was there with his legally-registered-as-a-boat No Problem Bronco.  Gary Porter ran hard in his second incarnation of the Carolina Crusher Chevy.  The Breen Brothers put on a show with the Mad Dog Blazer and Wild Hair Chevy step-side.  The TNT Stomper Chevy came in early for a display at Capitol Chevrolet over on the Eastern By-pass then Mike Whitt (I think) aired it out over the cars time and time again.  The mosaic photo showing most of the trucks was made of up 4 photos I took during the show with the plan to combine them one day.  The haze inside led to Stomper (the closest to me) ending up being the only one that came out really clear.  The days of TNT Motorsports and TNN/ESPN coverage of those events are long gone, but they still hold some great memories of when monster trucks started life as trucks and most still had some kind of floor in the bed.  Good stuff.  Enjoy. 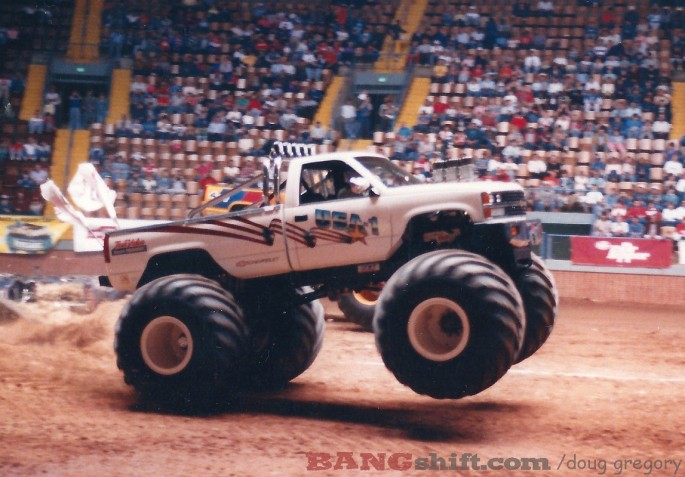 Got A Winter Project That Needs Fenders? Fenders N More Has You Covered From Trailers To Big Rigs - More In Here! Rough Start: You're A Seat Fitting Away From A Turnkey SCCA American Sedan-Prepared Mustang