Vintage race Car of the Week: The Tyrell P34

Dec 09, 2008Brian LohnesBangShift NewsComments Off on Vintage race Car of the Week: The Tyrell P34 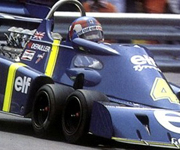 Maybe this is the week I’ve gone off the deep end, but I think this is the coolest Formula One car in history. I first saw this car looking through some old racing books at the town library when I was 10 or 12 years old and I flipped out. It’s stuck in my mind forever.

This is the six-wheeled Tyrrell P34 Formula One racer, one of two that were built and that competed side-by-side. A combination of brilliant thinking, fearless innovation and applied experience made the P34 not only a visual showstopper, but a proven race winner,  too. As you can probably imagine, it became the only six-wheeled car ever to win a Formula One race.

So the obvious question is why the six wheels? The answer lies in aerodynamics. As the ’70s progressed, racers’ became more versed in aerodynamics because engine design restrictions were making it harder and harder to simply outpower the foes. Seeking alternate means of gaining an advantage, many people turned their sights to aerodynamics at roughly the same time. Ken Tyrrell and chief designer Derek Gardner were two of the most forward-thinking guys in the sport at the time and decided to veer off the path of commonality when applying what they had learned about aerodynamic theory.

The pair were looking to reduce the frontal area of their car and kept coming back to the fact that the large front tires were doing them no favors in the aero department. They approached Goodyear, which agreed to construct small tires to fit 10-inch wheels for their car. All of the designing, building, and sourcing was done in total secrecy so no one had any idea this thing was coming.

Why not just two small front tires? The short answer is because this isn’t a dragster. The tiny tires (which would ultimately prove the cars undoing) reduced the contact patch of rubber so in theory the car would be at a handling disadvantage to its competition. By adding the second set of tires, that contact patch was restored.

Unveiled in 1976 at a press conference where the cover on the car was famously removed from back to front, the world motoring press was flabbergasted. It was the most radical F1 car anyone had ever seen. Speculation in the press ran rampant (we “the press” love to do that speculation stuff; try it some time, it’s a gas!) about how the car would work and act on the track.

The truth was, up to the point of the press conference, team drivers Jody Scheckter and Patrick Depailler were not enjoying this car one bit. The prototype that they were driving on testing days was the back half of an old car mated with the new front. By the time they sat in the finished product the bugs had been ironed out.

Well, almost all the bugs had been ironed out. Because the front tires were so tiny, the wheelspeed in revs per mile was huge; they would grow and actually separate from the rims at high speed. This was a tire problem, and with just one team to build the tires for, Goodyear was not throwing gazillions of R&D dollars at the project. The drivers had to live with it.

The only other issue that the drivers had was again related to the small tires. Traditionally, open-wheel racers like to visually use a front tire to set themselves up for a corner. These guys couldn’t see the front tires so Tyrrell and Gardner cut holes in the cockpit area for the drivers to see the rubber. According to testimony from drivers, once you were used to the car, you didn’t need the view holes.

Missing the first couple of races in the 1976 season when getting these late bugs sorted, the first race for the car to see action in was the Spanish Grand Prix. Patrick Depailler qualified the car third, but had to drop out after 26 laps due to brake failure, a problem that would never be totally sorted during the short life of the car.

The highpoint of the P34’s career in competition would come later in the season with a one-two finish at the Swedish Grand Prix. Jody Scheckter win the race with DePailler finishing in the second spot. DePailler would rack up another runner-up spot at Fuji in Japan to close out the season.

That winter, Tyrrell and Gardner rode a wave of confidence as their odd design seemed to be validated by the performance of the car on the track. They worked on a new body for the car and also hired engineers to rig the machine with all manner of sensors and data recorders to try and use science to improve the design. This was sci-fi stuff for 1976/1977 and really marked the beginning of the slide down the slippery slope of electronics in F1. It was a bit of a bust at the time, though, as the technology was not reliable and computers were no where near as powerful or useful as they are today.

With a good winter of testing, the team went into the 1977 season with high hopes but they were quickly dashed as the lack of tire development on the little fronts from Goodyear made the car a bit of an albatross. Simply put, everyone else had been benefiting from improved and redesigned rubber in the series and Tyrrell was running on tires which, outside of the initial production run, were not tended to by Goodyear in any meaningful way.

The small front brakes were overheating at nearly every race, a new aerodynamic body was robbing air from the radiator and causing he car to overheat, and after reworking the car for nearly every race of the season, Gardner quit the team. He was through with Formula One and left the sport forever. Tyrrell and his team gutted their way through the rest of the season with dignity.

That would be it for the P34s until the 1990s when some of the remaining cars started being run at vintage F1 races when Avon tire company agreed to produce some 10-inch fronts for the cars.

The major technical aspects of the car were pretty cool as well.

The motor was a 3.0L Ford/Cosworth V8 that produced 485hp at 7,000 rpm using Lucas fuel injection. It had a Hewland five-speed manual transmission and utilized unequal-length, double-wishbone suspension both fore and aft. The car weighed just over 1300 pounds. They ran in 30 races, winning one and posting one pole qualifying position.

Well, there’s the pocket history of one of the most innovative and off
the wall racers ever to hit the track, we’re waiting for an offer to
drive one!

Here’s an awesome video of the legendary Jackie Stewart taking the car through its paces. Dig Stewart’s helmet. He was a Scottsman, hence the argyle stripe.