Where Do Stolen Catalytic Converters End Up? Inquiring Minds Want To Know 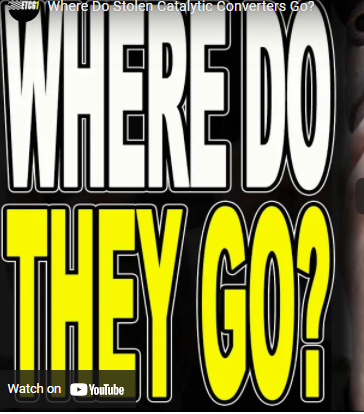 Everyone has heard the stories about someone coming out to their car in the morning only to fire it up and hear the sounds of open exhaust. The shock is entertaining for sure, but not cool for the average person. And in fact it renders the car inoperable in many cases because modern cars with multiple oxygen sensors measure the O2 levels before and AFTER the catalytic converter and having no catalytic converter and weird readings will sometimes put the car into limp mode and make it so you have trouble even driving it to the repair shop. I’ve personally heard stories of this happening to people, but because I own only old cars and only two of them with cats, my vehicles are not the normal type of target. But late model cars, and certain models in particular, have become very well known as the prime targets for thieves.

I’ve heard stories of certain Volkswagen models that are so easy to access that a thief with a cordless ratchet can lay down next to the car, reach underneath, and unbolt the catalytic converter in just a few moments. I have a feeling that these are the thieves who are replenishing the supply of replacements after the hack and cut thieves have stolen the same cat for the metals within it.

Check out the video below for some insight into just where stolen catalytic converters end up.

$1,000 Build: Building A Rat Rod Style F100 For Just $1,000 Is Not Only Happening Right Here, But Is Turning Out Awesome! Extreme E's First Event Was Full Of Crazy Action, Flips, Crashes, Jumps, And More. And That Was Just In Qualifying!

One thought on “Where Do Stolen Catalytic Converters End Up? Inquiring Minds Want To Know”