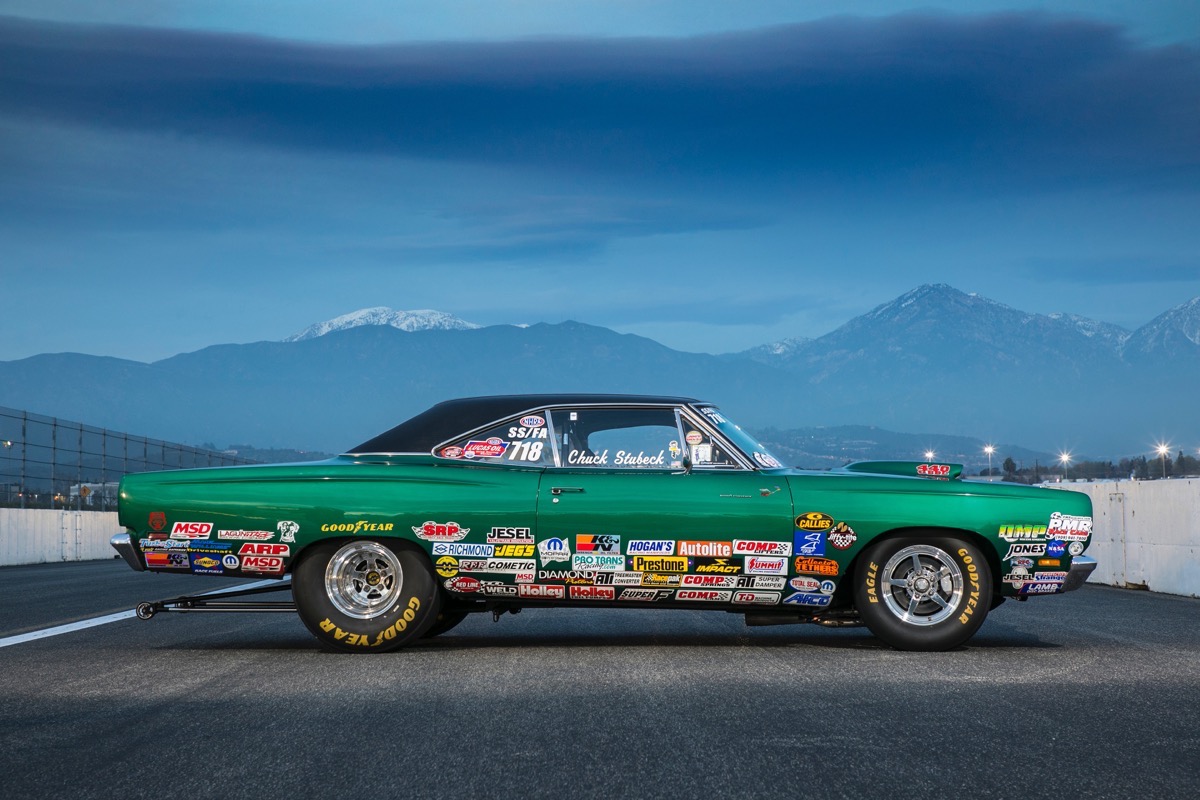 (Photos by Wes Allison) – If you enjoy things that are good, Chuck Stubeck’s awesome 1969 Plymouth Road Runner NHRA super stock car is something you’ll fall in love with instantly. It pulls big wheelies, it sits down nice and low over big rear tires, it runs single digit elapsed times, and it does all of this while wearing a coat of green paint and a vinyl roof that any car guy would slobber all over given the chance. This Road Runner is one of those unique cars that has lived an interesting life. It was a life that could have turned out far, far differently if Chuck had not pestered a neighbor to buy it more than 40 years ago. 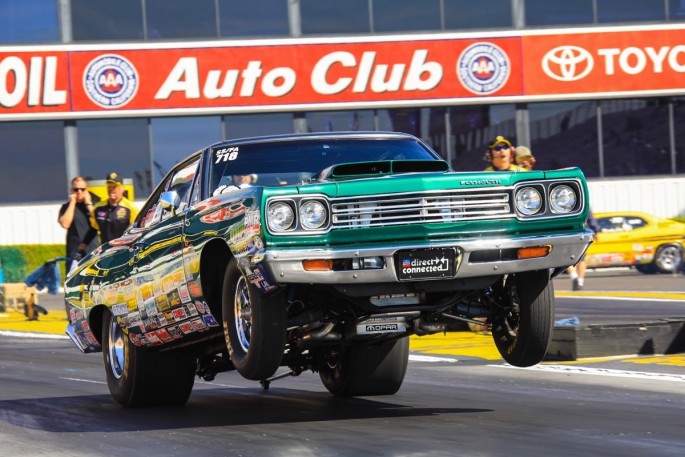 Like many race cars, this 1969 Road Runner has had multiple forms over the years. When it was first built, the car was a 383, 4-speed, high option model which carried a price tag of about $3,800 bucks. Purchased by a young man who was freshly home from Vietnam in late 1968, he drove it until early 1970 when he could no longer afford the payments. The man’s boss lived across the street from Chuck and that’s the guy who took over the payment book and brought the car home. It sat in his driveway for the better part of a year but he would not sell it.

Finally after a lot of asking and prodding, the man told Chuck that he could have the car for $3,000. Not needing to hear that twice, Stubeck bought the car. “The only thing the car needed was a battery, a set of points, and some air in the tires.” It had 12,000 original miles on it when Chuck began driving it in 1971 and until 1986 he drove it pretty much like it came from the factory. It was a fun street car that had put in its share of miles but it was showing some age. “We stripped the whole car down and had it painted the color that it is now,” Chuck said. “The painter added a touch of gold to a green that was originally used on Corvettes and it really makes the car look good in the light.” He also did a heck of a job as that paint is 31-years old now!

The car ran a series of 440ci engines in the 1980s and 1990s with four speeds to start and then the car was converted to an automatic to help from breaking parts as the big block stick stuff was hurting things at an unacceptable rate. The best it ran at that point was in the 10.70s at places like Palmdale in California. 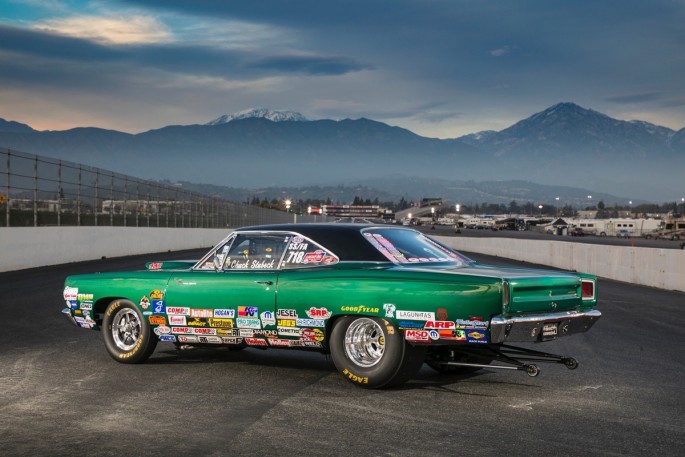 When the plunge was made to make the car a full-on racer, the chassis work on the car was done by Phil Mandella. Originally, the car was built to go PSCA racing which Chuck and his wife Linda did for a few seasons. “I had a 572ci engine in the car at the time and the car would run very low 9s at about 150mph and we had some fun with that,” Chuck explained. “I liked the PSCA and we had a good time racing in that series but I started thinking about super stock racing more and more. I asked Linda what she thought we should do and she told me that I had to make the decision so that’s the direction we went in.” Initially the car was going to be a hemi machine but after consulting with Bob Lambeck on an engine program, both men decided that a 440/6-pack combo would be the smartest bet. The result it one of the only 440/6-pack super stock F/automatic Road Runners in the world and one that has held the class record during the course of its career. 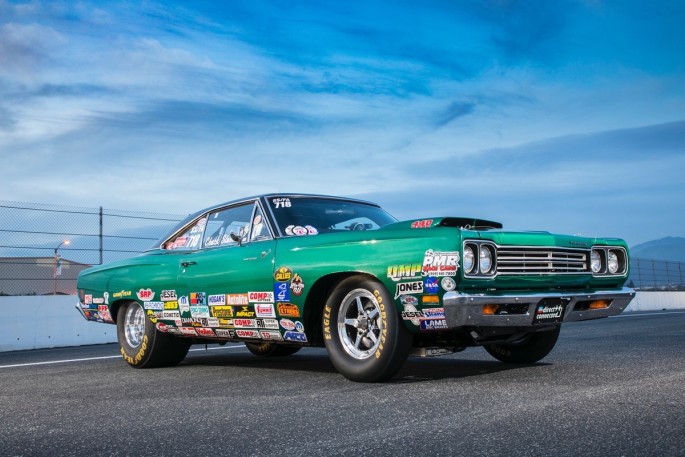 Not surprisingly, Chuck’s favorite element about the car is the thing that most drag racing fans love about the Road Runner which is the way that it launches. “I love letting go of of the button and about a second later seeing the moon,” Chuck said with a laugh. There’s no getting around the size and presence that these B-body Mopars have and when you take one and stand it on the bumper pass after pass, you make a name for yourself in the grandstands (and the announcing booth!) pretty quickly. While the mechanical end of the car is far from stock, there’s lot of original pieces that go for high flying and high speed rides on this green missile. “The car has the original headliner, original dash, original bumpers, all the original glass except the passenger wind wing and windshield, all the lenses and lights are original to the car, door handles, etc,” Chuck explained. “I have all of the original parts that came off the car when we made it into a dedicated race car as well. Engine, transmission, axle, driveshaft, all of it.”

That’s pretty amazing and perhaps someone, someday will want to turn this car back into a street cruiser but be honest here. We hope that does not ever happen. So what would people have to “undo” to put the car back to stock? What’s the thumping heart of this big green monster? What pushes it to elapsed times in the 9.50s and speeds of nearly 140mph? Let’s look. 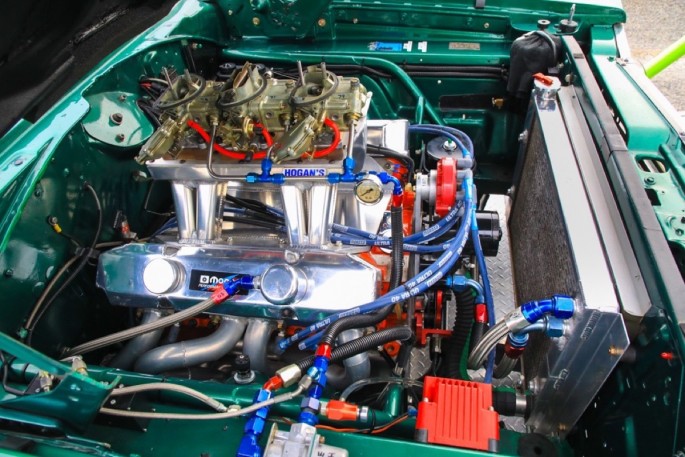 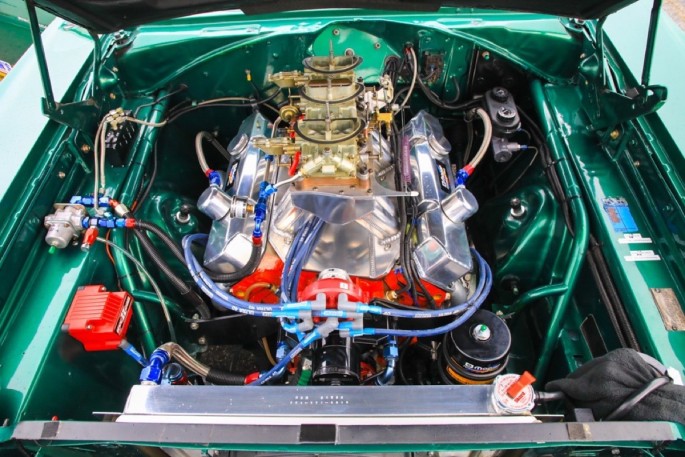 The rumbling heart of this car is a 440ci Chrysler RB-big block built by Jones Engine Development in California. The engine has dyno tested at 702hp and 615 lb-ft and as you can see, Chuck maintains it with a surgeon’s precision. One of the coolest things about super stock engines (roundly speaking, of course) is the appearance of factory carbs on top of some wickedly beautiful full-house engines. Check said that the three Holley 2-bbls atop the Hogan sheetmetal intake are box stock aside from jetting and the swap to a jet plate instead of the factory metering block.

The headers were built by REF Unlimited and Chuck had a couple of sets made for a couple of different combos that the car can run. For instance, he has a new QMP built engine coming soon that will be tested and the different headers may be run on that engine to see what makes it the happiest. Cooling is handled by a Meziere reverse flow system and a Ron Davis radiator. This engine was completely done by Jones and like many class engines, the specs stay pretty close to the vest in this one. Something we can tell you is that it has a load of compression and a LOAD of camshaft in it. The car has one of the most wicked sounding idle notes that we have heard from a super stocker in the history of ever.

An MSD coil and distributor send the electricity through Moroso spark plug wires and those guys deliver the juice to the plugs. Chuck uses a Racepak V300 to monitor channels like oil and fuel pressure, driveshaft speed, and RPM as the car heads down the track. It was a vital tool for him early on in the class racing game when oil pressure concerns had him worried. The addition of a Johnson oil pump cured those oiling concerns and now the data acquisition is used more to make sure that the systems on the car are in good health rather than for constant tuning purposes.

Chuck has two sets of rear end gears that he runs in the car. A 5.29 and a 5.43 are both utilized (depending on the situation) to turn the big Goodyear 14×32 slicks on the back of the car. While the world loves small tires and radials (we do, too!) there’s nothing that will ever replace the look and attitude of a big car on a big set of steamroller slicks. 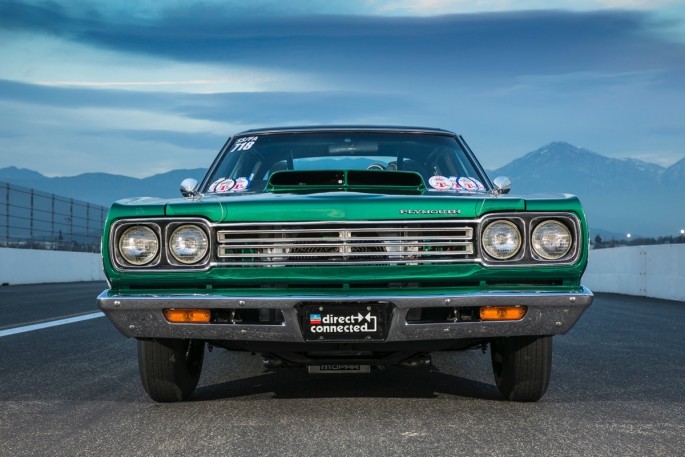 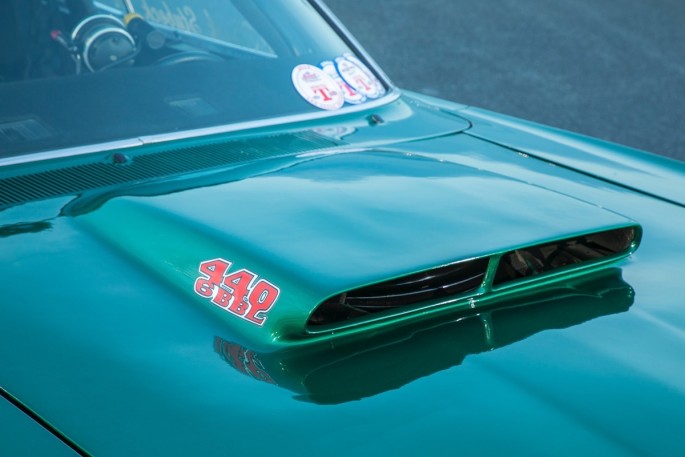 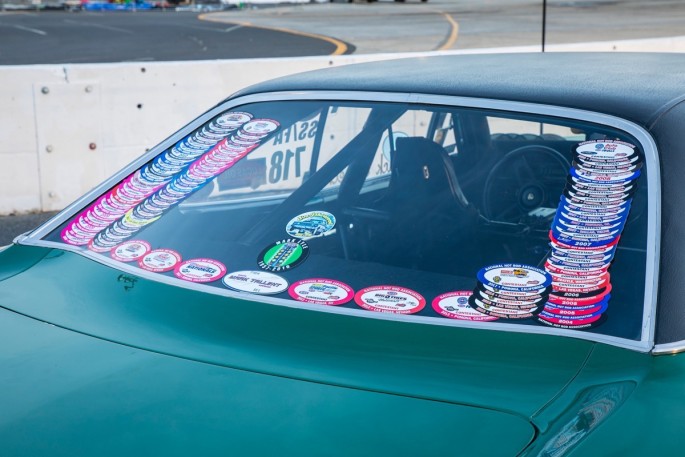 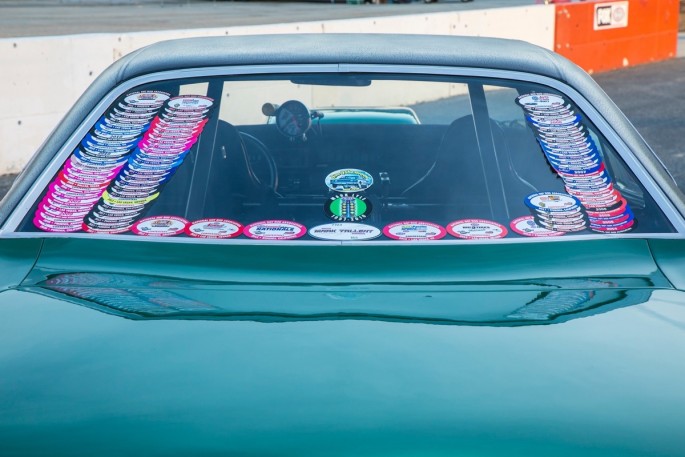 Every race car has its personal touches and cool elements. For Chuck and Linda Stubeck a sticker in the center of the rear window is one of theirs. This sticker remembers Jim Isherwood who was a standout hemi super stock racer out of the Pacific Northwest. Jim and Chuck had become fast friends at the track and often pitted together at the races. They maintained their friendship outside of the race track and so it was a big blow when Isherwood suddenly passed away. Chuck attended Jim’s services in Washington state and spoke there as one of his friends. The decal at the center of the rear window is a memorial to Jim and Chuck displays it proudly among a gaggle of event stickers. A cool tribute indeed. 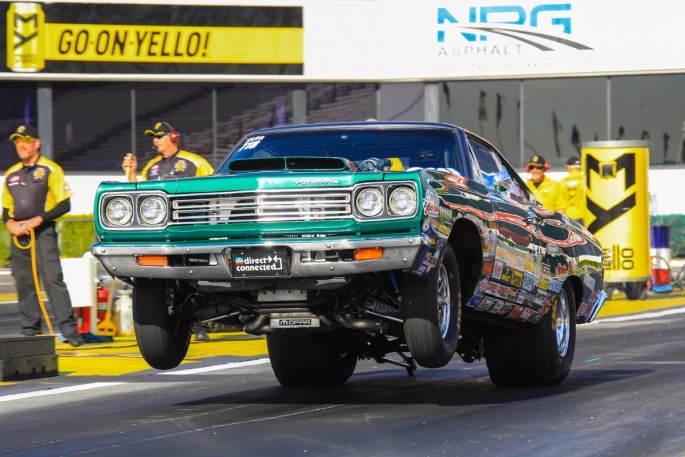 This is a truly awesome car with a truly awesome story. Chuck and Linda Stubeck are fan favorites both on and off the track because they love racing their car, they love hanging out with their racing friends, and they love spending time together on the road and in the pits traveling with their car. It was a true pleasure to meet both of them and blast the photos of this car at the big end of Auto Club Raceway Pomona during the waning daylight hours of Friday during the Winternationals. We can’t wait to see it again at the next event it shows up at to delight crowds and Mopar fans with its wheelies, its single digit elapsed times, and the sweet sound of a radically built Chrysler big block!

Enjoy the all of these great Wes Allison photos!

2018 NHRA Auto Club World Finals: Pit Photos That Show The Prep, The Thrash, and The Parts The 1993 Mustang Cobra Was An Attainable Hot Rod For 13 Year Old Me - Here's A Video Road Test From '93