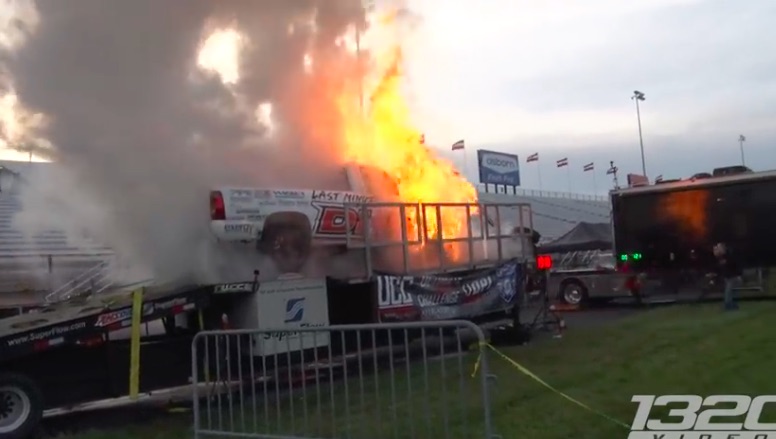 This is literally as bad as it gets. You are going to see the monstrously powerful DRD Diesel built pickup truck on the chassis dyno at the Ultimate Callout Challenge event in Indiana suffer a simply incredible failure and fire. The event, known as UCC is the hardest core, most ragged edge diesel triathlon in the world. The trucks that come here are purpose built for the contest, produce (on average) more than 2,000hp, and have to drag race, dyno, and sled pull over the course of the gathering to see who’s got the best truck. In an industry where bragging rights are a big deal, a strong showing at UCC can launch a shop into the national spotlight.

This pull starts out pretty normally but quickly devolves from there. As we hear one guy tell us in the video after this disaster, it is believed to have been a turbocharger failure that kicked off the whole mess. What happened in the aftermath of that took this from expensive and bad to downright horrifying. The debris from the exploding turbocharger wreaked so much havoc that the engine ran away, running at absolute wide open on its own oil and no one had any way to shut it off. You’ll see fire extinguishers coming from all corners and hammering the fire but they were powerless to stop this one.

3 thoughts on “Dyno Catastrophe: Watch This Diesel Truck Explode And Burn At The Ultimate Callout Challenge”