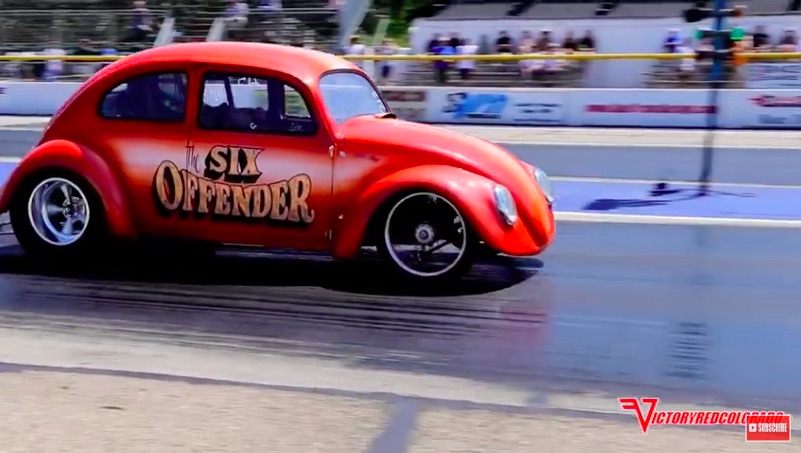 Ladies and gentlemen, welcome to the biggest drag racing breath of fresh air you have breathed in a good, long time! Thanks to the VictoryRedColorado YouTube channel, we get to watch the drag strip debut of the awesome Six Offender VW Bug. This little car is a throwback to the days when guys would have an idea and just execute it. Making the car was the most important part, following their own idea was the most important part. Impressing people on the internet and setting bizarre, esoteric, meaningless records was not the idea. No, back in the day if you were a guy with a VW Bug, a load of cool Chevy 292 inline six speed parts and a welder, you built this and my god is it cool.

While the car has functional doors, it is center steer and the big guy who drives it is packed in there like an old school gasser racer! The video shows the car’s first few passes down the strip and as you will watch, the performance comes along nicely through the first day.

The engine combo is a 292 Chevy inline with a Kay Sissel cylinder head, a PowerGlide transmission, and a Ford 9″ rear-end. The event that this VW was running at is interesting. Run at Byron Dragway, it is called Uncle Sam’s Pie Eating Contest. You have to run old pie crust slicks and you cannot do a burnout. This means that an aggressive launch would be a dumb idea. He walks the car off the starting line and the thing still runs some numbers.

Watch this and try not to love it, we dare you!

More Goodguys Columbus Photo Coverage: The Cars, The Trucks, The Cool All Right Here! The Most BangShifty Sand Box Ever! Watch This Father and Son Play On Their Dragline and Shovel

6 thoughts on “Drag Freak Video: Watch The Six Offender VW Bug Take To The Strip For The First Time”