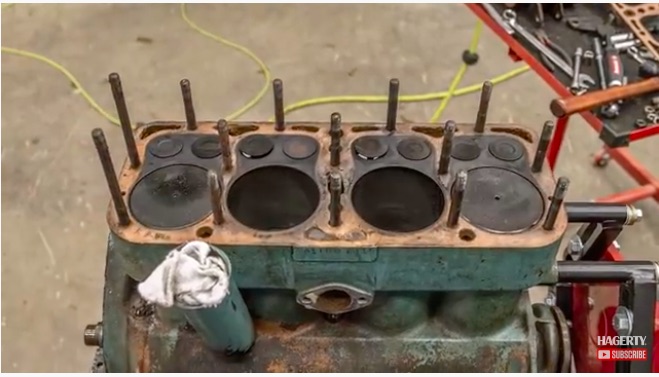 We have loved every single iteration of the Hagerty Redline Rebuild series of engine restorations that the guys have done so far and this one is no exception. The most recent engine in the series is a Model A Ford four banger that was leaking oil like a wet sponge and needed to be brought back up to good running order to power the Swap to Street Model A project build.

What’s cool about this project is that we see the little 200ci, 40hp flathead four cylinder taken all the way down to the block, machined, and then it goes through some processes that we’re not used to watching anymore. Pouring the bearings being the most noticeable. Like all of these videos we see the whole process, every step.

It’s awesome when old engines like this are worked on because they require knowledge and skills that are definitely not as commonplace as they once were. There are not a ton of machine shops that could or would handle this engine work, especially the pouring of the bearings. It’s dying art.

No, not a big horsepower engine, but one of the most important engines in the history of hot rodding as the whole genre was basically built off these things to start. How neat to watch!

The Steam Dream: This 1969 Film Is Full Of Promise, Hope, and A Distinct Lack Of Reality - William Lear's Dream The Challenger Revival, Part 3: Tearing Into The E-Body's Front Suspension!

2 thoughts on “Redline Rebuild: Watch A Model A Ford Four Banger Get The Full Rebuild Treatment!”