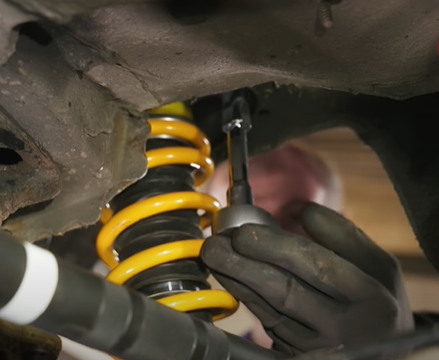 Well, this Mini Cooper S is not going down without a fight, that is for sure. In fact, it’s like this thing thought it was going to spend it’s life just hauling kids and groceries around and is now pissed off that it is actually going to have to do work and haul ass. You’d think it would be happy to continue the heritage that is Mini Cooper, but perhaps not. Too bad for it, because Edd is smacking it around and forcing it into submission and we totally approve.

Edd China is back at it, helping a buddy of his with a Mini project that is destined for Rally racing greatness. The car has all kinds of stuff done to it already, namely safety and performance upgrades, but the suspension was the final piece of the puzzle and hadn’t been touched yet. In the videos below you’ll see them work on the front suspension and then get into the rear suspension with a lot of new components designed to make this become a real rally car.

In typical Edd fashion, he thinks there might be a better way. Will he make it happen without taking the subframe out or resorting to a torch?

We’ll see. We can’t wait to see this sucker on the road, and wonder if the owner will let Edd take a stab at hauling ass and being sideways in the dirt on some little country road in England. What could possibly go wrong?

IF YOU MISSED PREVIOUS PARTS OF THIS PROJECT OR ANY OTHER EDD PROJECT, CLICK HERE

Truck Show Photos: Texas Heat Wave Was Hot, And Not The Show We Remember, But We've Still Got Photos To Share Alex Taylor's Quest For The 6's 1955 Chevrolet Build Is Looking Awesome, And Here's The Build Before The Thrash Began.