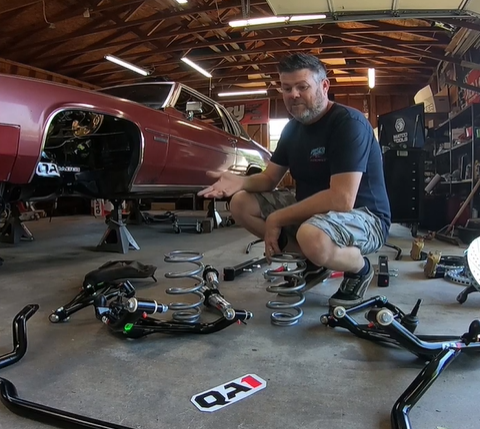 We ran the first video on the Chicken Couple project yesterday and told you that more was coming. Well here is video number two. There are going to be a lot more videos and a lot more content coming from this project so stay tuned because it is bad ass!

The Chicken Coupe has been a long time coming and is a project that I am behind 100%. After all, good friend Matt Graves is the one behind this craziness and he’s been involved in some incredibly killer builds over the years. Of course, the fact that I’m a huge Cadillac fan, love the idea behind Pro Luxury, and I think big cars are cool, means that it is pretty hard for me NOT to like this project. The reality is that this project has been happening for several years, but like most it has had hurdles, speedbumps, or what have you that have had it sitting a lot as a pile of parts and pieces but without much time dedicated to putting it together. Well that is all changing now as Matt will explain here in video number one.

We’ll be running all the build videos from this project, but we encourage you to Subscribe, sign up for notifications, and to comment on what you think about this project because it’s going to be a riot we promise.

We’ll have more to talk about when we share the second video, but until then we want you to see what is going on, hear it straight from Matt, and make up your own mind on what you think of this thing.

Here is the video description from Matt:

We kick off our 1983 Cadillac Coupe Deville project. We take an old 80s era B-body car to building into a Pro-Touring machine. Project Chicken Coupe. We call our new movement Pro-Luxury. This is the suspension that is going on the car and the brakes that are going to stop this big beast.

How To Pin The Crankshaft On An LS Engine. (NO MORE SLIP = MORE BOOST AND HP) FULL RESULTS Alex Taylor’s Quest For The Sixes 1955 Chevrolet Project: Driver's Compartment Fitted And Steering Working!