How To Pin The Crankshaft On An LS Engine. (NO MORE SLIP = MORE BOOST AND HP) FULL RESULTS

Jul 11, 2021Chad ReynoldsENGINE, ENGINES, TECH, Tech Stories, VideosComments Off on How To Pin The Crankshaft On An LS Engine. (NO MORE SLIP = MORE BOOST AND HP) FULL RESULTS 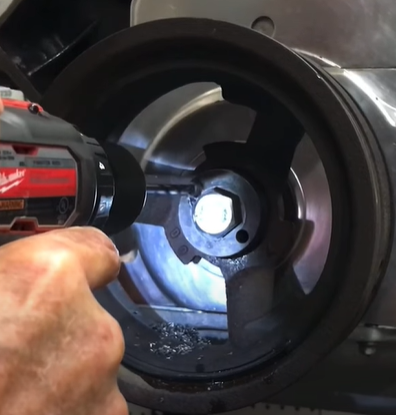 LS engines have a press-fit harmonic balancer, damper, whatever you want to call them, and they are an interference fit that requires a balancer installer to put one on and sometimes a hydraulic balancer puller to get one off as they sometimes decide they never want to come off again. What’s funny about that is that if you bolt a ProCharger, roots blower, Vortech, or what have you to one and try to make big boost the balancer will sometimes slip on the crankshaft which means it isn’t spinning the blower and engine rpm and that means less boost and power. If you are really trying to spin a blower hard then there is a lot of force on that balancer and the problem just gets worse.

On a traditional small or big block Chevrolet there is a keyway built into the crankshaft. This groove corresponds to a matching groove in the balancer and then a small rectangular pin is slid into the groove on the crank and the balancer to lock the two together. The crankshaft bolt then makes sure it can’t back off, but the key and keyways are what actually drive the balancer. In most boosted applications, this keyway is fine, but if you were to go big on power it is not uncommon to install a second keyway and key on the crankshaft so that it has extra strength.

So what do you do on your LS engine outside of having a keyway put into it and a balance made with one too? I mean those are things that have to be machined into the crank and balancer while the engine is apart and then put all back together. Don’t fret, there are several simple kits that allow you to drill the crank and balance, while the engine is together, so that you can slide a nice round pin in to lock the two together. It goes in from the end, not the side, so watch this video from Richard to see what we’re talking about and how simple and clean this works.