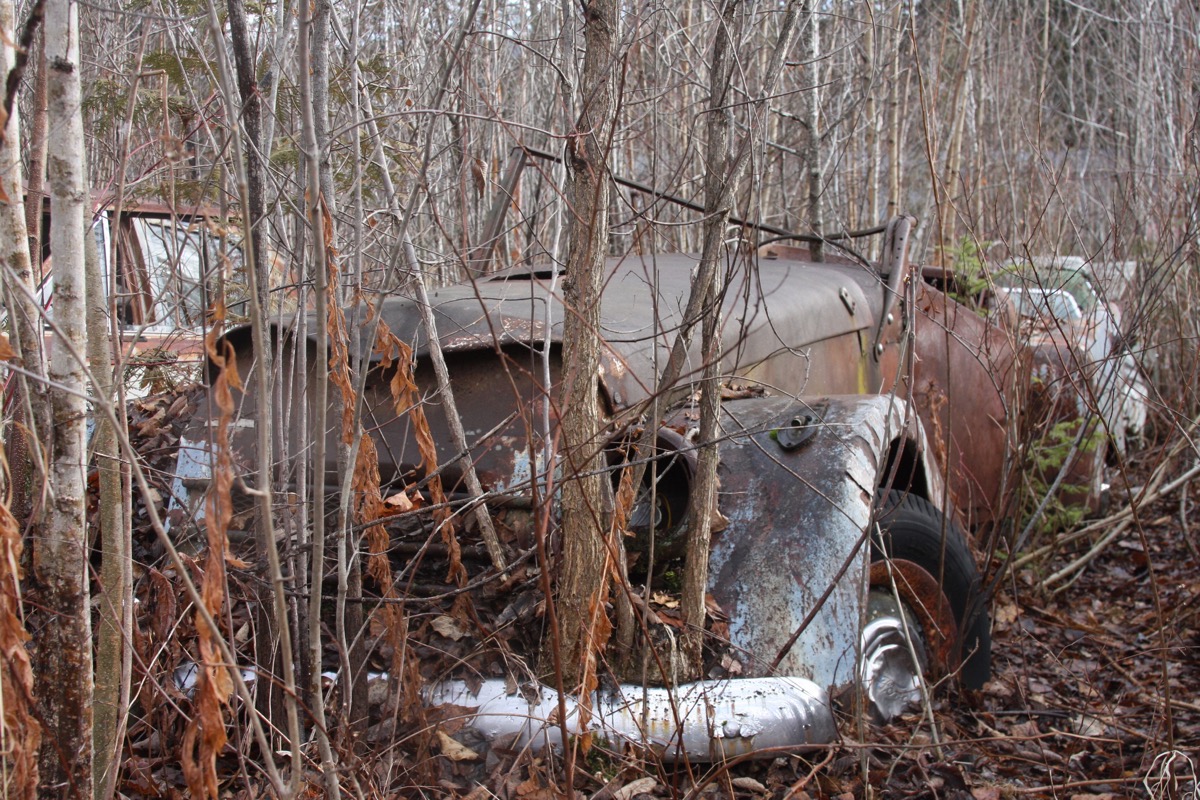 When BestRide.com’s Craig Fitzgerald and I were romping through Gates Salvage in Hardwick, Vermont looking for cool stuff we found lots but nothing prepared us for what you see above and in the video and photos below. I cannot remember if it was Craig or I who saw it first but both of us just about leapt out of our shoes to get a closer look at what we immediately figured out was a homebuilt sports car/hot rod from the 1950s. This thing is ugly in all the best ways, still mostly intact, and has spent many a year returning to the ground at Gates Salvage but we know there is an awesome story here and we’re determined to figure it out.

The sports car scene in America exploded in the 1950s as GIs returned from Europe having had a taste of the fun that little European cars offered. Distinctly different from the massive boulevard cruisers they were used to here in the USA, the light and sprightly machines were imported in bulk after the boys got home from kicking Hitler’s ass. On the other side the coin, the guys who did not have the scratch or wherewithal to import a car built their own and this is an example of that practice in living color. Stone simple in its construction, slightly awkward in its look, and powered by a good ol’ flathead V8, it is the physical manifestation of someone’s ability and sweat. It is also the physical manifestation of their disgust and disappointment…. CONTINUE READING BELOW VIDEO AND PHOTOS!

See, the reason that this car made it to Gates Salvage all those many years ago is because the top the motor is basically melted off. There’s plenty of charred wiring and stuff to indicate that this was an electrical fire and while the machine is simple enough, the owner at the time did not want to deal with it, so he got scrap value for it and the machine was loaded into the field, which is now a rapidly developing forest. You can almost feel how angry/disappointed this guy was when his pride and joy cooked. Perhaps it was a second owner who didn’t know how to fix it or simply didn’t want to fix it. Cars like this are exceptionally cool right now but there was a long time period when being seen in something like this on the road didn’t exactly make you cool. It made you weird. The 1970s and 1980s were not exactly high times for cars like this but with our era’s seeming obsession with the history of hot rodding, this car should be saved and put back to how it was when new, awkwardness and all.

Fitzgerald and I are positive that there has to be some cool photos of this car lying around from when it was first built. It had to have been raced or at least driven to the races in the 1950s and early 1960s, right? No one would just build a car like this to stare at it. More evidence that it was raced is seen in the photos above where the fastening points for a tonneau cover that would have been affixed when competition duty called are present. The plunging doors remind us of Jags from the 1950s, the front fenders have a sort of Morgan-esque feel to them, and the hand made, screwed together rear quarters are more Oldsmobile to us that anything else we can picture.

If nothing else we want to see if we can spread the word on this car so that its history can be illuminated or least or at best someone with an affinity for this era of cars and a bunch of dough can drag this thing home and put it back to the way it was when the original builder finished it.

Please spread the word on this thing far and wide. Let’s solve the mystery of the Gates Salvage vintage homebuilt sports car!

This 1973 Camaro May Look Like It Stepped Out Of The Late 1970s But It Sure Doesn't Sound Like It! Question of the Day: Would You Care If The Automakers United Their Engine Building Divisions Into One Shared Unit?

6 thoughts on “Mystery: Help Us Find The History Of This Incredible Homebuilt Sports Car/Hot Rod At Gates Salvage (Video)”