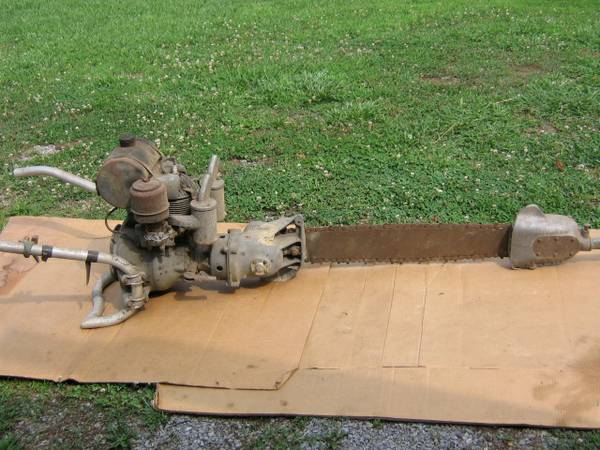 Imagine a company today going into the business of making chainsaws and using the brand name “Maul”. Now there is an actual woodsman tool called a maul which I have used to split logs before. It is like an axe and a sledgehammer combined, which means it is capable of fixing virtually any home related problem with large amounts of blunt force trauma. This chainsaw is a cool old Maul brand saw that was designed to be used by two guys.

Guy number one, we’ll call him the “driver” in this operation would stand at the business end of the thing and control the throttle as well as the two handles. Guy number two, we’ll call him the “most likely to be maimed” was in charge of the handle that sits on the far end of the saw’s bar. Basically this big boy would be lifted onto the top of a log, winged up, dropped down and both guys would use their weight to force the spinning saw through the wood. Slipping your hand off that handle would result in a very bad day and a very unrecognizable hand.

As best we can tell, these two man saws were introduced sometime in the mid to late 1940s. They seem to fetch some decent money from collectors (yes, there is a pretty large community of antique chainsaw collectors out there) and frankly this things looks like 100 shades of awesome to us. Power was made by the single lung two stroke engine you see on the “business” end of the saw. We’re not sure how many guys were hit by whipping chains back in the day when using this thing or how many lost their handle on the thing and paid the consequences, but this chainsaw stands as a testament to an era in American life when you bought something, used it, and if you got hurt, your first instinct wasn’t to sue the manufacturer, it was to make sure you didn’t dick up again and hurt yourself for a second time.

This would be a bitchin’ piece to have as a conversation starter, or to take to the Christmas tree farm this winter to pull a Clark Griswold move and really show off. “Stand back Rusty…daddy’s got the Maul fired up!”

Are we nuts for wanting this thing?

SCROLL DOWN TO SEE PHOTOS AND THEN HIT THE LINK FOR THE AD! 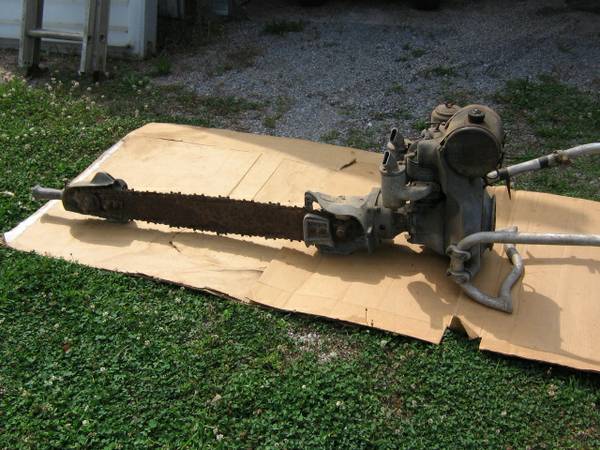 Drag Gallery: More Nostalgia Nitro Funny Action From Geezers At The Grove 2013 - We Love These Things! BangShift Question Of The Day: What Makes A Car A Street Car? What Defines It As Such?