The Salt Beds Of Salduro Chapter 7: The Aftermath – What Became Of The Major Players From The First Speed Trials On The Salt

Aug 09, 2019Brian LohnesEvent Coverage, LAND SPEED RACESComments Off on The Salt Beds Of Salduro Chapter 7: The Aftermath – What Became Of The Major Players From The First Speed Trials On The Salt

(By Bret Kepner SCTA Official and member of the Society of Land Speed Historians) – For the principals involved in the production of the 1914 Salduro trials, life was never quite the same after the event. In what was almost certainly a mutual agreement, William D. “Big Bill” Rishel and the AAA became disassociated almost immediately after the trials. Rishel maintained prominence among the road clubs in Utah and gained some fame as the original cartographer of many western routes on which later automobile road maps were based. Rishel again drew the ire of the AAA in 1932 when he promoted the first speed trials on the salt since the 1914 event. The program was conducted under the sole sanction of the Utah Automobile Association of which Rishel was secretary. Rishel served as manager, publicist and timer for Ab Jenkins’ 24-hour speed and endurance runs in a Pierce-Arrow on September 18-19, 1932, an event which was sponsored by the Salt Lake Chamber of Commerce. Jenkins staged another speed and endurance record run on August 5-6, 1933, which included sanction and heavy attendance by AAA officials but Rishel was conspicuously absent. 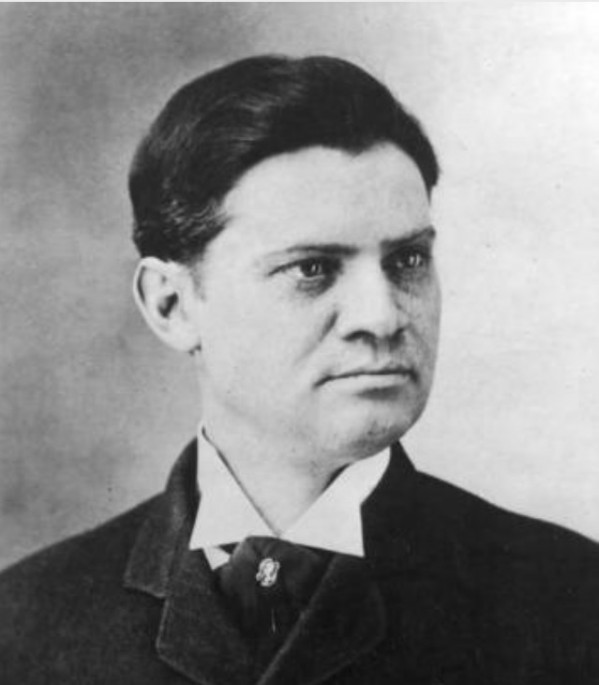 The motorsports career of William D. “Big Bill” Rishel quickly came to a close after the Salduro Speed Trials.

In fact, the AAA took almost complete control of all speed activities on what, beginning in 1934, became known as the Bonneville Salt Flats. Rishel remained with the Utah Automobile Association even after suffering a severe stroke in 1938. “Big Bill” Rishel spent his final years writing brief articles for several motoring publications until his death at the age of 77 on March 20, 1947.

Less than seven weeks after his performance at Salduro, Teddy Tetzlaff’s Maxwell simultaneously blew two tires during practice for a 100-mile race on September 25 at the Kalamazoo (MI) Fairgrounds. The ensuing crash through the track fence, in which the car struck several trees and rolled over, left riding mechanic Basso with a fractured skull. Although he was knocked unconscious and suffered minor injuries, Tetzlaff was severely shaken. Basso would recover and go on to own several car dealerships in Los Angeles (CA) only to be all but forgotten as the man riding with Tetzlaff in the Blitzen Benz II during the 1914 speed trials. However, Tetzlaff announced his retirement from racing only a few weeks after the Michigan crash citing the increasing speed of the race cars and the death of his close friend, racer Spencer Wishart, who was fatally injured when he hit a tree during the 1914 Elgin (IL) road race only ten days after Teddy’s Salduro run. 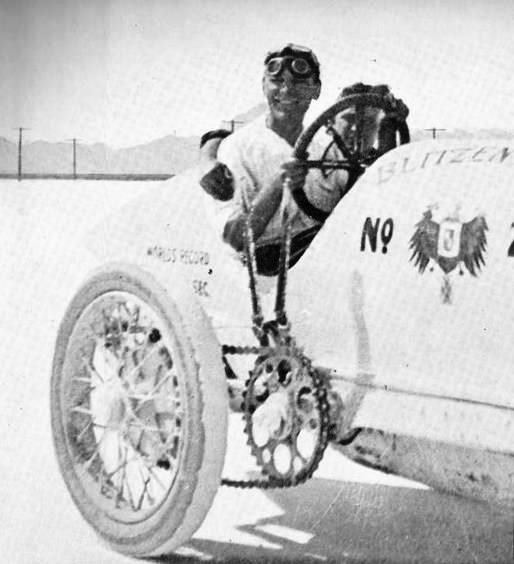 The broad smile of Teddy Tetzlaff on the salt at the wheel of the Blitzen Benz II may be one of the most iconic images in Land Speed Racing.

After a messy and public 1915 divorce in which his wife claimed desertion, Tetzlaff briefly made a living driving a cab in Los Angeles. He returned as a driver for Maxwell making long-distance highway reliability runs and, by the end of 1915 was back at the wheel in track competition. Tragically, “Wild Bob” Burman was killed in a roll-over accident at a race in Corona (CA) on April 8, 1916, while Tetzlaff was directly behind him on the track. By 1921, however, Teddy finally had enough. After enduring the racing deaths of so many comrades, including Billy Carlson at Tacoma in 1915 and “Hughie Hughes” in Pennsylvania in 1916, he permanently retired. Through the 1920s, he was active as a timing and technical inspector at AAA events and was involved in many community activities near his home in Artesia (CA). Tetzlaff passed away on Sunday, December 8, 1929, at age 51. His death was attributed to complications from a spinal injury he suffered during the 1911 Los Angeles-to-Phoenix Road Race. For decades, Tetzlaff had used a variety of legal and illicit medications to treat the pain.

After the 1914 Salduro trials, E. A. “Ernie” Moross found himself an outcast in the world of AAA championship racing because of his involvement with Rishel. While he continued booking his fairgrounds fleet the following year, tragedy struck the Moross team on February 14, 1915, when new team driver Jack Callaghan died after crashing his Deusenberg at the Ascot Park track in Los Angeles. Amid his auto racing dates, Moross ventured into the promotion of aviation shows which were quickly becoming as popular as motorsports. Already a pioneer in lighting oval tracks for night auto races, Moross incorporated night flights and landings into air shows, (using electric lights on the planes and flares on the ground), and drew monstrous crowds. He was touted as one of the great promotional minds in entertainment but, as a half-dozen of his most famous drivers lost their lives on the track, he gradually withdrew entirely from motorsports.

Moross was an extremely wealthy man. In the 1920s, however, he began to exhibit eccentricity which bordered on the bizarre. With his wife, Mary Cathryn “Katie” Moross, (whom he married in 1912), he left his Indianapolis offices, returned to Michigan and became involved in state politics. While campaigning for a state senate seat, Moross became notorious for lengthy speeches filled with self-righteousness which seldom addressed current issues. Claiming he was an ex-Texas Ranger, he often wore a firearm to public functions. He lost the election.

During Prohibition, Morass attracted attention in national newspapers by posting a sign on his front lawn which promised a $100 reward to anyone catching suspected bootleggers or anyone selling liquor within one mile of his house. He was often seen sitting on his front porch wielding a Thompson submachine gun.

In 1923, Ernie purchased an historic mill built in 1810 in Mosherville (MI) and returned it to operation. The mill became a source of irritation for local residents already fed up with Moross. He attempted to sue the state when a bridge near the mill was washed out in a storm. He was arrested for Assault With Intent To Kill when he left his home armed with a shotgun after receiving anonymous letters threatening to burn down the mill. Local residents actually burned an effigy of Moross at the mill with a note attached advising him to leave town or face similar consequences. Moross’ wife, Katie, was arrested for carrying firearms but refused to leave the jail until protection could be offered for her and Ernie. Moross still enjoyed a close friendship with Henry Ford, (with whom he shared similar political views), and, in July, 1929, Moross had the mill disassembled and presented it as a gift to Ford who had it reassembled at his Dearborn museum. 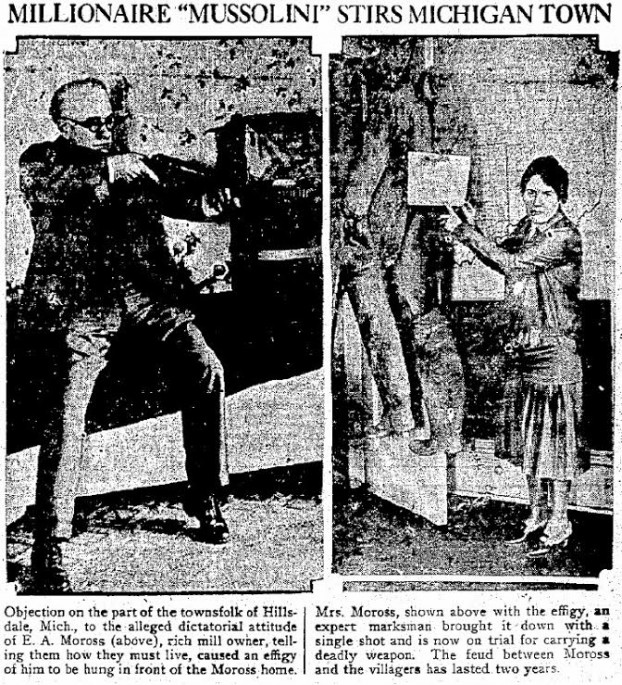 Of all the inexplicable events experienced by E. A. “Ernie” Moross after the Salduro Speed Trials, the shooting of his own effigy may be the most bizarre.

Exactly fourteen weeks later, E.A. Moross was destitute. Over the previous three decades, Moross had carefully invested a vast amount of his fortune and the collapse of the stock market in October, 1929, devastated his holdings. Like friend Barney Oldfield, for whom Moross helped develop a portfolio, he lost everything. In May, 1933, Moross was detained by police for driving with expired license plates. Moross insisted he was protesting the $21.45 licensing fee, ($381.01 in current value), and he and Katie locked themselves in the car and dared police to “come and get us”. The police attached a rope to the car and dragged it to the nearest police station where they impounded the vehicle by chaining it to a post. After twelve hours, the police finally received a warrant, smashed the windows out of the car and took both to jail. The protest was widely debunked; most people believed Moross simply didn’t have the money to buy new plates.

With what little money remained, Ernie and Katie moved west and began a small prospecting business in search of gold and mercury through Utah, Nevada and California. Settling in the southwest Nevada town of Goldfield in 1939, Moross developed a reputation as a respectable mining engineer and earned enough income to construct a fully mobile prospecting and assay office in which he lived with Katie. He later set up camp near Needles (CA) to continue developing mining sites. In January, 1949, he suffered a blood clot in his brain and Katie took him to a reputable hospital in Long Beach (CA) where she spent the last of their money trying to bring him back to health. Ernie Moross contracted pneumonia and died on April 4, 1949, at age 75. Two days earlier, Katie pawned the couple’s last asset, her wedding ring, to pay the hospital bills. 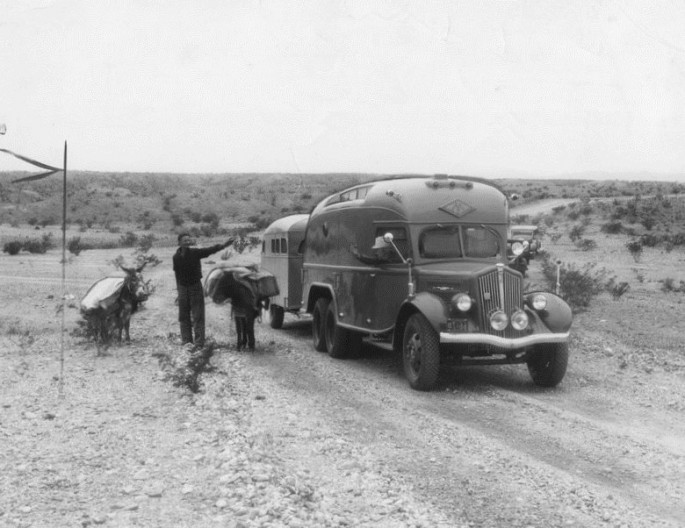 Moross and his beloved wife, Katie, travelled the west through the 1930s in search of mining claims at the wheel of this custom-built “mobile land office”.

Although he was no less influential than any other in the original endeavor for speed in Utah, there is no peak in the Silver Island mountain range named for Ernest A. Moross. There are hundreds of names more deserving to be lauded on those pinnacles. However, while the facts have been distilled and distorted over time, it is imperative the true history of the first speed trials at Salduro be preserved. Each of the individuals involved in the event changed the face of Land Speed Racing and are, in fact, directly responsible for a century of the world’s fastest motorsport to have been contested on those same salt beds at Salduro. 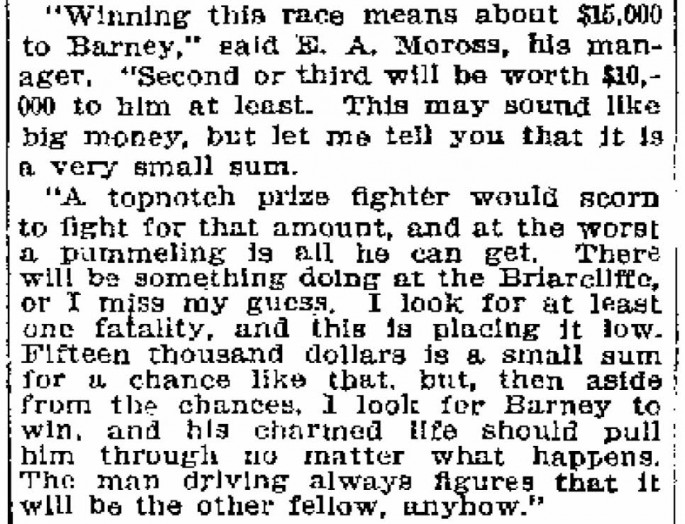 There is no question Ernie Moross changed motorsports and Land Speed Racing with his promotional vision and entrepreneurial ability . Yet, one of his most lasting impressions may have been made in an excerpt from an interview given to the Washington Post one month before the 1908 Briarcliff Road Race in New York. In an era during which death had a hand in many races, Moross quite succinctly put the struggle in perspective when discussing the chances of his driver, Barney Oldfield, chasing a winner’s purse which equates to $380,000 in current value.