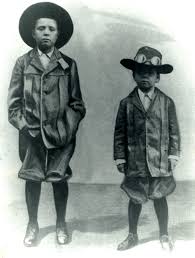 (By Bret Kepner) — (Editor’s note: Yesterday, Bret Kepner dropped me a note after seeing the story of the Abernathy brothers and their amazing feats of travel as kids in the early 1900s. Most of you know Kepner’s name because he is a “knower of things” when it comes to land speed and drag racing. Little did I know that he was also a “knower of things” on obscure historical events like little kids driving around in the early part of the 20th century. Kepner filled in many of the holes left by my original story which was admittedly a sketch of their amazing journey. If you thought the first story was interesting, prepare to have your freaking mind blown here. Enjoy and thanks to Bret Kepner for dropping this knowledge on us…now go read up on the Hawley Smoot tariff  act of 1930 Bret, there will be a quiz…)

Here’s the original story if you missed it

They left NYC on July 6 and arrived in OKC on July 29, 1910. Louie (9) did almost all the driving because Temple (6) couldn’t reach the single foot pedal.

Brush chose to put them in a Runabout model, (a bone stock $485 version), because it was the only car in the Brush line the kids were capable of starting and driving without help; being a runabout, it was smaller and lower to the ground than the Phaeton. It used a ten-horsepower, single-cylinder, water-cooled engine which Louie was fully capable of repairing since it had about three moving parts. Apparently, he had no problems with the chain-drive system, either. As near as I can tell, Temple’s duties were pretty much relegated to lighting the gas-burning head and tail lamps for night driving!

Brush’s objective from this exercise was to not only advertise the all-wooden car’s roadworthiness but hype their new counter-clockwise cranking starter designed to avoid the many injuries suffered by right-handed people trying to crank-start a clockwise-rotating engine. (Seriously). The premise was if two kids can do it, so can Uncle Bob. The Brush also got about forty miles per gallon. 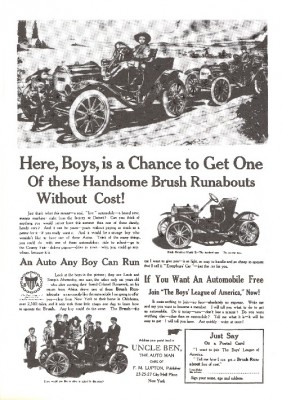 By the way, father Jack was a famous U.S. Marshal whose nickname was “Catch ‘Em Alive”; it was the media, no doubt, who decided to drop from the moniker the remaining “Before You Kill ‘Em”. He was purported to have caught seven hundred outlaws. As can be expected, Jack and Teddy Roosevelt were extremely close friends especially after Roosevelt, as president, made Jack the Marshal for all of Oklahoma when it became a state in 1907. Interestingly, by the end of the kids’ trip home, the media had revised the nickname to “Eat ‘Em Alive”. (Seriously).

Jack allowed the kids to ride to NYC (on their horses, remember) under the conditions they “say their prayers each night, not travel on Sunday, and ride no more then fifty miles per day”. Jack also told them, “If you get hungry outside of a town, look for the nearest woman”. Apparently, they simply stopped at farm houses and asked for “the lady of the house” to whom they explained their situation. The kids probably ate nothing but cake and cookies during the entire forty-six days it took them to get to New York.

Louie’s horse, (named “Sam”), was the same which Jack rode during hunting trips with Teddy. Temple’s horse kicked a rod during the trip and Louie, rather than using the same “starving nine year-old” ploy, bought another, (named “Willie Haines”), for $75, (cash!), which finished the ride. The kids reported made 143 miles in their final two days and their one-day record during the trip was 78 miles!

One must wonder about a nine year-old carrying a minimum of $75 cash, ($1820 in 2014), on a cross-country trip. However, the scariest part of the “Abernathy kids” legend is their horseback trip through Texas and into Mexico through the summer of 1909 during which Louie and Temple, (aged five and eight, remember), were notorious for paying all meal and hotel bills in cash. It stands to reason the reputation in the territory of Jack Abernathy was what kept them safe.

Here’s the best part of the story which seems to have been forgotten. On their WAY to NYC, (before they met Roosevelt in NYC), the kids stopped in Washington, D.C., and literally knocked on the White House door. They were taken in to see President Taft who blew off meetings with several bigwigs to take them around town. Taft interrupted a session of Congress and had 74 year-old House Speaker Joe Cannon, (a notorious blowhard), introduce them from the rostrum. It was Taft who alerted the media and it was a circus from that point. After they left Washington, the “Abernathy kids” never wanted for a meal again and they were accompanied every inch of the way by every conceivable reporter and dignitary stopping in multiple towns for “photo opps”. The mayor of Philadelphia went nuts when they refused to stop in his town because all the other detours were screwing up their timetable to arrive in NYC in time to meet “Uncle Teddy”.

Now, here’s the stuff the media usually “overlooked”. The kids met Daddy Jack in New York and the deal with Brush was, obviously, made by the old man. Newspaper magnate F.M. Hall organized and bankrolled the Brush tour and paid for the horses to be shipped back home to OKC. The kids did, indeed, drive the Brush themselves but Jack was right behind them in a Maxwell followed by a troupe of media members and Brush mechanics in other vehicles. To maximize the media coverage, the return route went north through upstate New York and across Pennsylvania, Ohio, Indiana, Illinois and Iowa.

Their daily schedule calling for leaving no later than 7:00 AM each day, (they usually were on the road earlier), and stopping at 9:00 PM each night. Each day was filled with stops, speeches, banquets and photos with mayors, governors and other politicos. Many reports mention Louie being “extremely tired” even during morning press galas. Six year-old Temple, on the other hand, was the life of the party who often “took over” interviews.

Marshal Jack was called away on business when the group arrived at Davenport, Iowa, and the kids really were “on their own”, (other than the support vehicles), from the Mississippi over to Cedar Falls and Omaha and then down to Kansas City, where Dad met up with them again. Ironically, it was during this segment of the trip in which they made their best time, covering 183 miles in one day through Iowa. Apparently, when Dad was gone, they “let ‘er eat”; this was also the only reported period in which Temple was allowed to drive…with Louie working the throttle pedal. They missed a few stops during this leg, too. Heading into Atlantic, Iowa, they drove full speed through town while waving and yelling greetings to the mayor and assemblage who were outside City Hall waiting for “the Kids”. They still made the front page of the Atlantic Telegraph, however.

From Kansas City, the final four days took them to Emporia and Wichita in Kansas and then south to OKC where they received a massive ovation and parade. The final tally on the Brush odometer, (it had one!), was 2515.2 miles.

The bottom line, though, is Louie and Temple were kids. Probably the best quote of the entire OKC to NYC to OKC trip came from Louie during a banquet in New York attended by the richest men in the city. When asked to make a speech, Louie stood up at the podium and said, “Mr. Toastmaster and Gentlemen: I like automobiles. I like Coney Island. I like President Roosevelt. I like you all but I want to get home and see my five little sisters. Goodbye.” 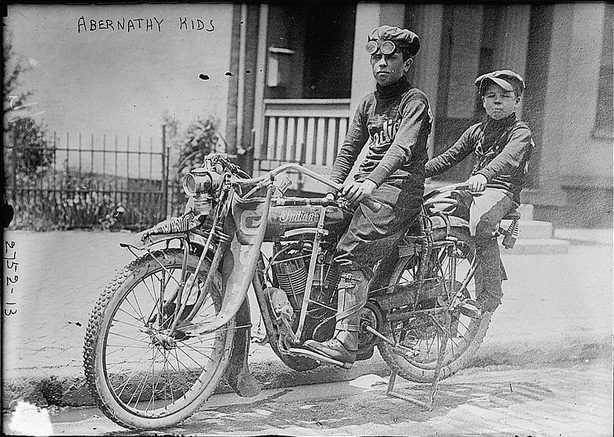 Here’s the boys on the two seat Indian they road to NYC and back!

Motorized Freak of the Week: Weird German Propeller Train - The Schienenzeppelin Jeff Gordon Taxi: How To Scare The Daylights Out Of A Doubting Jalopnik Writer - EPIC