Sneak Peek: Ironworks Speed and Kustom Has Some Bitchin Projects in the Works!

Roger and the guys at Ironworks Speed and Kustom in Bakersfield California have been building bitchin chassis and complete cars and trucks for several years now including the 2011 Goodguys Giveaway ’55 Chevy Convertible. And since we spend a fair amount of time in and around Bakersfield going to drag races, Roger has been busting our balls about not coming to visit. So, on the way to Chowchilla for our vinyl wrap session on the $200 Hauler, we stopped in and said hi. Now Roger was quick to point out that the shop was getting some spring cleaning done and he didn’t want it to look too messy. We would not have described anything about Ironworks as messy. This place is cool as hell. With 10,000 square feet of big tall metal building plus enough parking for the Big Rig, and all the projects you could want, this place is a man’s dream shop.

There are a half dozen guys that work for Roger, along with his lovely wife, and keep the place running smoothly. Nobody was sitting around while we were there, and yet all the guys seemed to be having fun and were totally cool to talk to. Below you’ll see a few of the cars in process at the shop as well as the killer Ford truck that was just about finished and ready for a full feature in Street Trucks magazine. You will dig it.

Notables like Big Jim Shipka are getting cars built here at Ironworks, and Roger’s sense of style and performance is really trick. One of our favorites has to be the killer round tube skeleton chassis that is going under the Chevy II. We aren’t going to tell you a lot about each project, in fact just a tease, because we’re working with Roger on following the shops builds here on BangShift.com so that you can check out regular updates and then go check out the finished projects at an event near you “As Seen on BangShift.com”. It’s going to be cool.

Visit WWW.IRONWORKSSPEEDANDKUSTOM.COM to find out more about all the products and services, and tell them BangShift sent you. 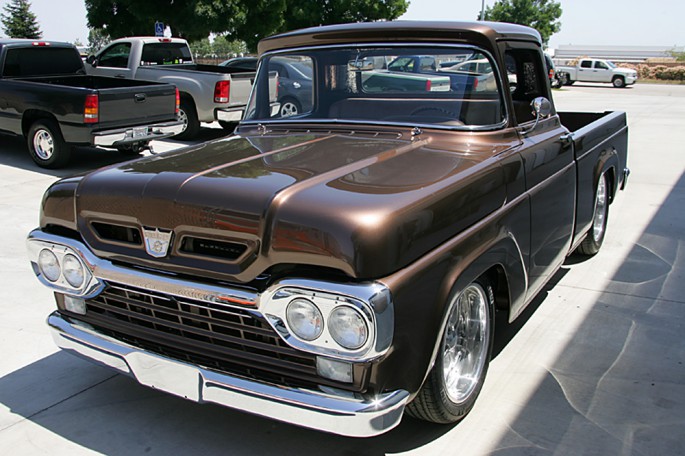 We dig the big Ford. It’s ultra clean and subtle which is why we dig it. Yep, it’s brown, which is a weird. But ultra ultra cool. We told Roger that if he told us he was building a brown truck we would tell him he was nuts. Seeing it, makes you realize how right it is. We are down with the brown baby. 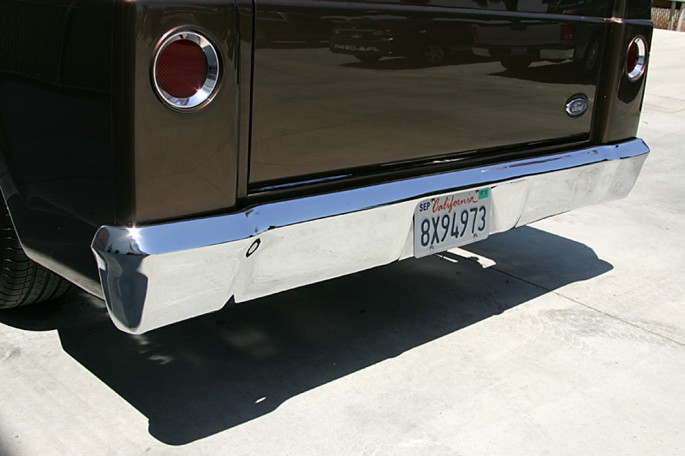 Can you tell us what the rear bumper and tail light bezels are from? We guessed first shot and I think Roger was a little surprised. Can you? 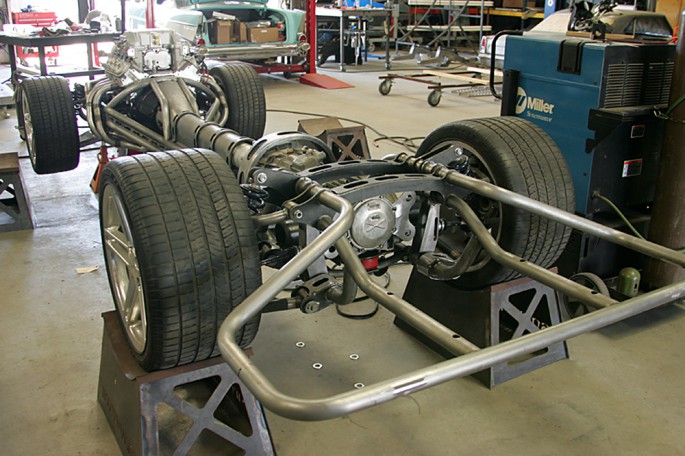 This chassis is going to be bitchin. It’s only about 18 inches wide in the middle, and goes into the cool Chevy II below. With completely new floors and unibody structure that mounts to this skeleton chassis, it will be far stiffer than stock and way fun to drive. We can’t wait!!! 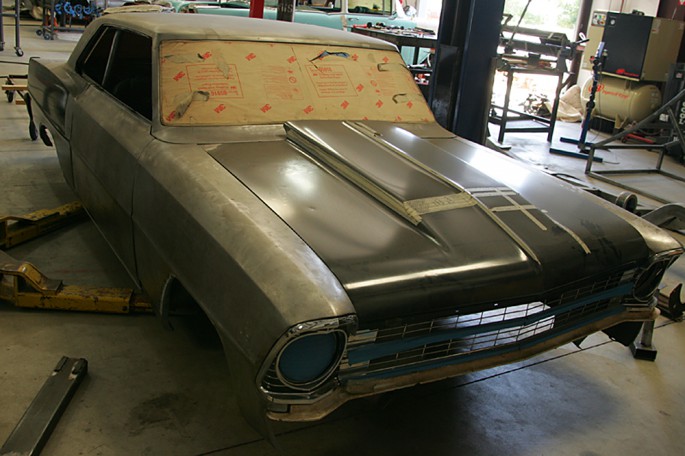 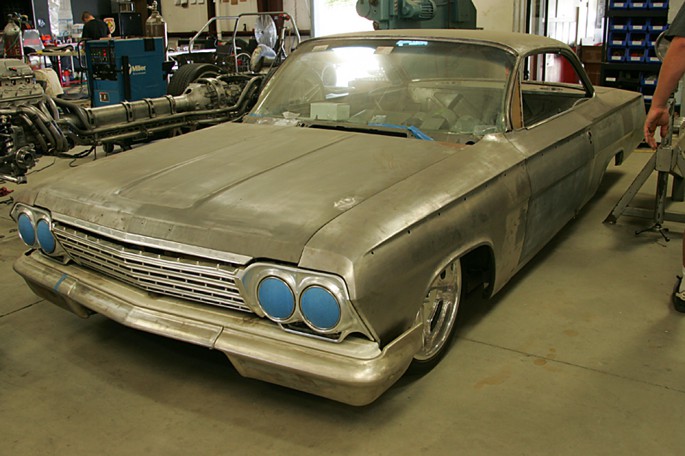 This is how an Impala should sit…AT RIDE HEIGHT!!! If you want yours to sit like this, Ironworks has a chassis that will do it. Sure, it is for the guys that are building cars from the ground up and aren’t afraid to cut a little bit of floor and such, but it sure is one trick piece.  Check out the chassis below. This car is going to feature killer billet tail lights and a complete one off billet grille and headlight doors. The blue tape is covering Harley LED headlights. 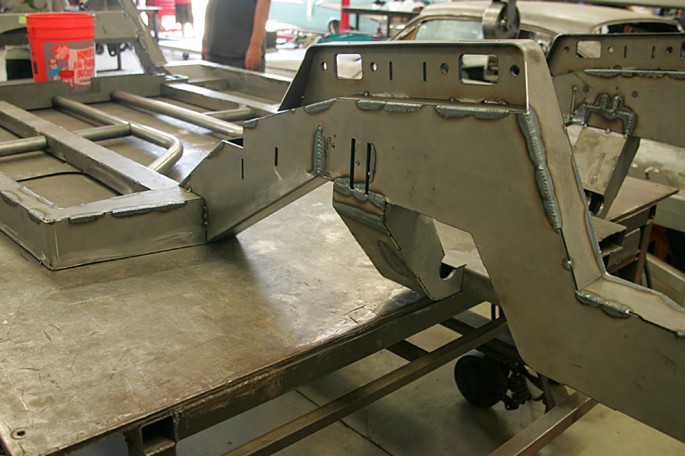 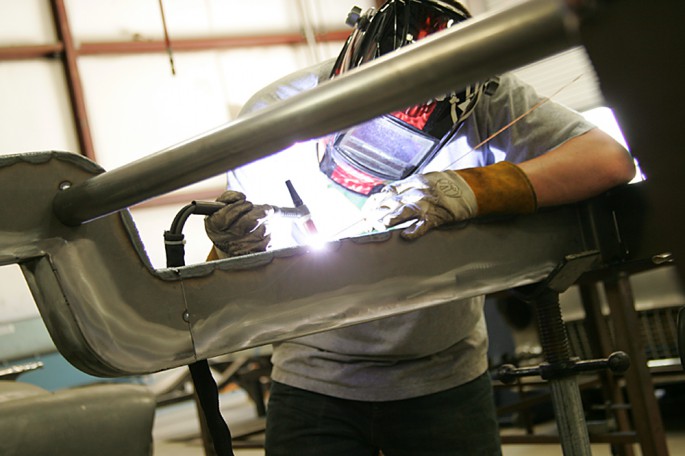 Big Jim Shipka’s ’69 Camaro is below. Nothing about this thing is stock. Front and Rear Fenders are widened, killer front ducts are going in, dash, floors, cage, and all kinds of other amazing stuff. More parts arrived while we were at the shop which means more cool stuff will be happening in the coming weeks. Stay tuned. 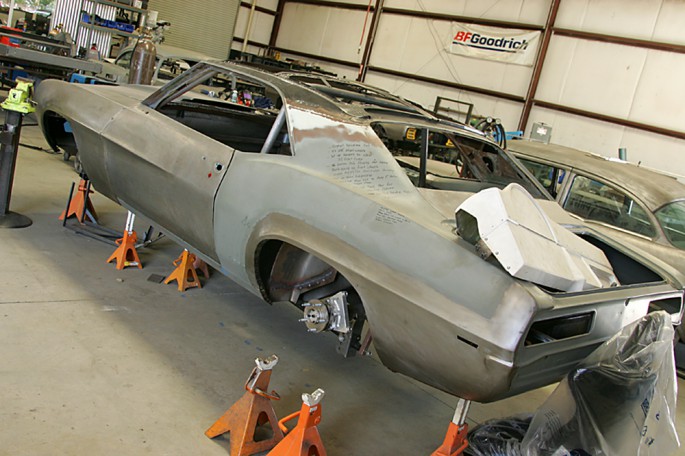 3 thoughts on “Sneak Peek: Ironworks Speed and Kustom Has Some Bitchin Projects in the Works!”