Awesome: Watch Sammy Miller Run 4.73 In His Rocket Funny Car And Blow All The Windows Out Of The Santa Pod Tower! 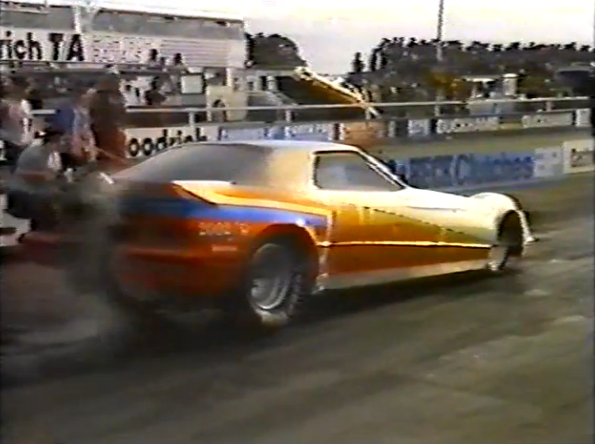 It was good to be Sammy Miller in the early 1980s. The guy was everywhere, setting speed records on ice, running rocket cars in the US and Europe, and he was still building up to his biggest moment which was setting the all time low ET on a quarter mile drag strip for a funny car which happened in 1984 at Santa Pod. Two years before that incredible 3.84 second blast down the English track Miller was doing what he always did at the Pod, he was putting on one hell of a show. As you will see in this video, which was shot in 1982, Miller had his famous Vanishing Point rocket funny car and the crowd was all hyped up to see him try to really lay a number down. You can hear the music playing in the background, you can hear the announcer getting the crowd wound up, fretting the fact that there is fire licking from the back of the car, and the famous crowd countdown that had people in a frenzy when he launched the car. The good news is that Miller literally rocketed down the track in the 4.30 time frame, which is not world record stuff but it is still mind-bendingly quick. We don’t know what the mile per hour was on the run but it has to have been something stunning today and completely cartoonish in the early 1980s.

The not so good news is that the massive concussion from the rocket being “fired” for lack of a better term blew virtually all of the windows out of the tower at Santa Pod. At first you can see a woman wiping her face off and a single pane of busted glass but then the camera pulls away and there are a bunch of windows blown out. The crowd responds in kind with cheering, laughing, and a kind of incredulous response that I’ve heard before. I’ve heard it when I was in a tower that experienced a similar failure of having a window blown out. I heard that same response again this summer when Chad and I were announcing a jet car run at Holley LS Fest and the cars set the tower on fire. There’s a collective, “Holy crap, that just happened,” vibe that comes out in those situations and this one looks and sounds exactly like others I have been inside of. It is pretty cool, actually.

On top of all this stuff, the footage is some of the best you’ll see of Miller’s car leaving the starting line. The camera dude was standing close enough to reach out and touch the car. Like all jet car runs it is virtual silence and then all hell breaks loose when the driver “hits the button”. This is cool stuff.

Gasser Video: A Look At The Thriving Period Correct Gasser Scene At Greer Dragway NutJob: The new Need for Speed Trailer Sucks - Where are all the good action car movies?

6 thoughts on “Awesome: Watch Sammy Miller Run 4.73 In His Rocket Funny Car And Blow All The Windows Out Of The Santa Pod Tower!”