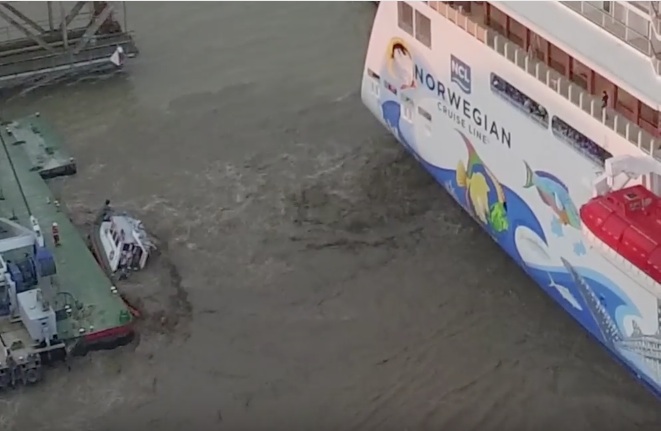 One of the many omens that have become part of the legend of the RMS Titanic involves it’s near-miss with the SS City of New York when the doomed ocean liner was leaving Southampton, England. As Titanic passed by, the three-inch-thick hawsers that were holding New York tore out of their moorings due to the suction effect of the larger ocean liner’s movement. The Titanic reversed the port propeller to get the back end to swing while a tugboat dragged New York away. Basic lesson from all of this: the bigger the boat, the bigger the power needed to move the tonnage through the water, and the bigger the effects of the power. A little john-boat’s wake is nothing compared to a yacht, is it? It’s all about scale, and you’re about to see a great example of what we mean in this video.

The monster cruise ship here is the 1,098 feet long, 165,157 gross ton Norwegian Escape, on her way from the shipyard to the North Sea last October. We are assuming that the pod is fully functioning and that was the reason why a torrent of water was blasted at the poor tugboat moored up. It doesn’t go completely underwater but I wouldn’t want to be the person that has to answer to the owner of the tug at all…sailors are known for colorful language, but all of that might be skipped once they find out just how much muddy, brackish water is inside of the boat!

2 thoughts on “Bad, Bad Day: Watch As This Cruise Ship Swamps A Tugboat!”