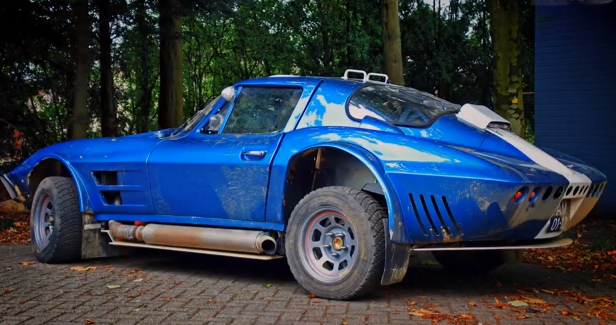 A couple years ago we were geeked out by the dudes who attached the East African Safari Rally with an old Mustang. As cool as that was, another group of racers has risen to the challenge and built a Corvette Grand Sport freaking rally car, with side pipes, the factory style paint job, wheel travel that will blow you mind, and a transmission that whines like a wounded animal. In short, this is the coolest thing we have seen in a long damned time. This video shows the car on its fourth shakedown session at an offroad park type place in Africa. We’re not sure what is in it for an engine, but a healthy small block is our guess. Oh does it sounds awesome through the sidepipes!

As awesome as it sounds, this video will show you how capable the thing is off road as it careens through sand, dirt, small bud pits, and over roads that no Corvette has ever thought of traveling before. There are multiple camera angles used in this video and we dug them all, especially the one used to show the rear suspension at work. This car sucks up bumps like a Hoover on steroids. Yeah, we mentioned the sound already…but OH THE SOUND! The car has a much taller than stock ride height but still looks boss, it has protective skid plates under the side pipes and under the gas tank as well. This isn’t some video of the car being idled around in the dirt. They get some big speed rolling during several sections of this video and the car just takes the abuse like it does not care.

There’s mud and water sloshing up over the roof, sideways action, and that transmission whine combined with the side-pipe symphony. This is 100% BangShift approved! We know that we’ll do our best to follow the exploits of this team come November when the race kicks off. It is no piece of cake, either. This is a real rough and tumble rally through all kinds of hostile terrain in the wilds of Africa. We want to be these guys!

Thanks to Arild for the tip!!!

PRESS PLAY AND ABSORB THE TOTAL AND UTTER GREATNESS OF THIS CAR AND THE RACE TEAM CAMPAIGNING IT!