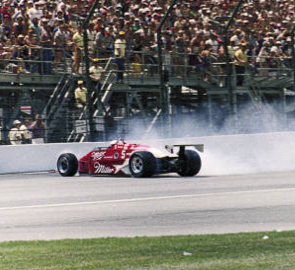 One of the most historically crazy moment from the history of the Indy 500 happened 34 years ago this weekend with Danny Sullivan’s famed “spin and win” move during the 1985 running of the race. With Sullivan and Mario Andretti battling for the lead, Sullivan misheard a radio transmission from his crew and thought they had told him that there were 12 laps left when there were actually 80 to go. Thinking it was time to put the car into kill mode, Sullivan cranked the boost knob and let ‘er eat.

With a big head of steam he dove very deeply below Andretti and attempted a pass which ended with him spinning a perfect 360 directly in front of the quickly reacting Andretti. Mario dove down, missed Sullivan and and sped off, likely thinking that he would be living on easy street for the remainder of the race.

A yellow flag was thrown and virtually everyone hit the pits, including Andretti and Sullivan. Coming out of the pits the stage was set for a battle to the end. Sullivan caught Andretti a couple of dozen laps later, passed him, and recorded his first and only Indy 500 win in fine fashion.

If we’re ranking the top 100 moments at the Indy 500, this one has to be damned close to the top. The fact that he did not hit a wall, another car, or even cause a spec of damage to the car enough to make the thing slow down is nearly beyond comprehension. While Sullivan never won another Indy 500 the guy became an international star and continued to have success in open wheel cars and as an off road racer. If you were a kid of the 1980s like we were, Danny Sullivan was the epitome of cool when it came to race car drivers.

Think there will be any dramatics like this coming for us in 2016?

Amazing Video: This Mechanical Breakdown Of A 1949 Indy 500 Winning Roadster Is Amazing Indy 500 History: The Amazing And Largely Forgotten Success Of Cummins Diesel Engines At The Brickyard