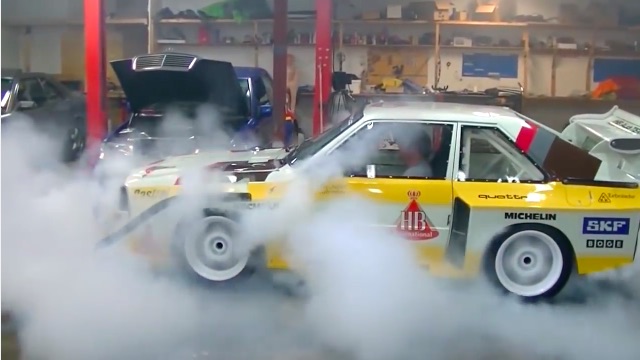 Audi’s Quattro rally cars are rally royalty. They are the four-wheel-drive beasts that took over from light, nimble, rear-drivers like the Lancia 037 Rally and Stratos and became world-beaters. They are the groundwork for the legendary Group B class of cars and what they stood for: winning at all costs with every technological marvel available. Packing turbocharged five-cylinders that turned out impressive power figures even today (the S1 below “officially” rated at 470 horsepower, but was more likely well over 500 before any witchcraft was performed by a pro) the Quattro is truly a car that any gearhead should know, appreciate, and even lust after.

This S1, however, managed to get into the hands of an Aussie, one that’s bored and wants to fumigate his shop. So with all four ablaze, the inline-five howling like an injured wolf and the turbocharger huffing and chuffing, kick your morning off right…by enjoying the sounds of a legend in a moment of insanity.

One thought on “Morning Symphony: An Audi Quattro S1 Fog-Banking The Shop!”