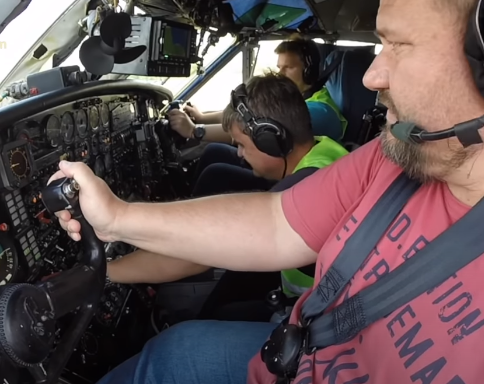 Well, you do see some strange stuff happening in Russian videos, but this one will make you laugh. I’m not sure what the whole story is, because who the hell speaks Russian, but I’m sure there is a story here. These three dudes are in a Russian Antonov 12 cargo plane getting ready for, and taking off. But other than the guy wearing a safety vest, I don’t see much that makes any of them look too official.

With that said, none of them are in a hurry either, and they seem to be talking to air traffic control, so I doubt they are stealing the thing. But it is Russia, so if you believe the hype then anything is possible I suppose.

What I think is going on is that these guys are former Russian Military. I say this because if the guy flying had a belly any bigger he’d never pull the stick back far enough to get it off the ground. But he does seem to know what he’s doing, so I’m going to say Ex Military. Who knows.

If you aren’t familiar with an Antonov 12, you could look it up like I had to, or you can just believe me when I tell you that it is a Russian military transport plane first put into service in 1959. They were produced in the USSR until 1973 and flown for who knows how many years after in actual military operations. In the late 1960s the Chinese bought some and were reverse engineering them when they entered into an agreement with the Russians to offer tech support on them and production consulting. That deal went sideways, but the Chinese kept working on it until they finally entered into full production in 1981. That plane is now called a Y8, and newer versions have better electronics and such.

Fun, but I’m out on flying in one. I like little planes, and would fly in a lot of stuff. But a Russian plane that has been knocked off and produced by the Chinese? Nope