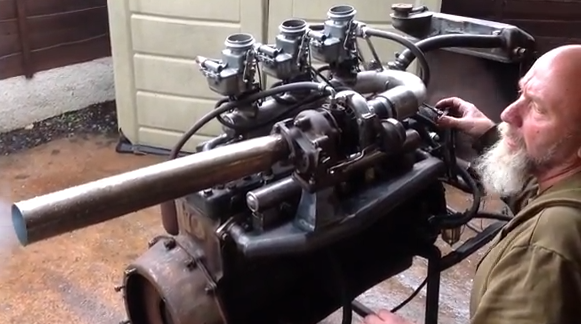 I’ve always had a fascination with old “obsolete” engines but my first trip to Bonneville really kicked that deal up about 10 notches. Seeing and hearing old flatheads and other mills do stuff that was truly mind boggling made me really appreciate the engineering an thought that goes into trussing up come dinosaur of a mill so that it can make decent power and not eat itself up. Naturally, like any addict I have been seeking fixes here and there and boy is this one neat. The video below shows a guy firing up an old Ford flathead inline six engine that he has outfitted with a single turbo, three one barrel carbs in a draw through arrangement, and the whole setup is generally really nice looking. It seems to run pretty decent too as you’ll see him light the motor off, wing it several times and then you can hear it burble happily at idle.

Ford flathead six cylinder engines are kind of the lost sister to the far more sought after V8s and even traditional four bangers that some of the old timey hot rod guys like to play with. The inline six engines were made in a couple different displacements. There was a 226ci engine used in lots of cars over the years with a max power rating of 95hp in factory form and there was a 254ci engine used in trucks and other large applications like buses that was rated at 115hp and 212 ft/lbs of torque. I’d be lying if I told you that I had any idea which engine type this one is outside of the fact that it is a flattie and there are six spark plugs. Does the turbo make this a 150hp or 175hp engine? Who knows and who really cares. This engine rules and the dude with the beard at the controls (and who we suspect owns the motor) did a fine job crafting his setup. It is not often you see three one barrel carbs in a draw through setup on a pipe style manifold.

Guys who know lots about airflow and engineering and all will probably tell us how jacked up this deal is and how it could be made far better, but sometimes that’s not the point. This engine in an early to mid-1930s Ford coupe would be absolutely great and we’d be all over giving it a test drive any time, anywhere!

PRESS PLAY BELOW TO SEE AN ANCIENT FORD FLATHEAD SIX WITH MULTI-CARBS AND A TURBO!

RPM Symphony Video: Listen To A Pair Of 11,000 RPM Small Blocks Head Down The Strip! Hammering Away: Biting The Bullet And Doing Rod Bearings With The Engine In The Truck!