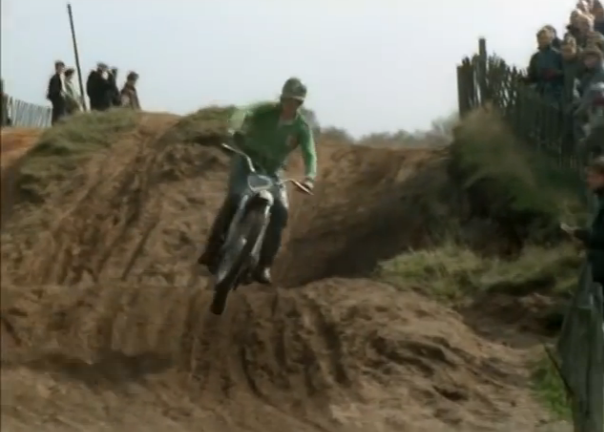 We probably should have known that what we now call motocross was born and developed in England before exploding into a worldwide activity. Motocross racing is a huge spectator draw all over the North America, Europe, and basically wherever else it is held. The high flying antics of the riders, the tight racing, and the hot rodded bikes all add up to a great show. This video was made in England during the 1960s and talks about the growing phenomenon of motorcycle “scramble” racing. Scrambles were motocross races as we know them now but the name had not been adopted when this film was made.

The video covers lots of elements of the sport from the construction of the specialized bikes in small shops all the way to the riders practicing in sand pits and then competing at large events that draw 10,000+ spectators. It is all packaged up nicely in about a 10-minute documentary style film. The footage of the guys in white work coats building the bikes in small shops rules.We don’t know the specific shop that they’re talking about because it is never specifically named but the place employed 160 people at the time this film was made and they had built some 10,000 motorcycles and the narrator states that the USA was the firm’s primary market. That is pretty awesome.

The major issue with this video is that like us, you’ll immediately turn to eBay and start searching for a 1960s era dirt bike to kill yourself on. Trust us, we spent two hours looking at stuff following our initial watch of this video. An interesting sidebar is the mention and footage of the sale director of the unnamed motorcycle company. The man was paralyzed from the waist down and yet still rode a custom trike and traveled the world selling these motorcycles. While that isn’t something that would blow us away in today’s world, 50 years ago, that was a very big deal.

Other stuff to watch for:

The pin-up/nudie photos on the wall of the small home shop where two young guys are building their own bike in. Nothing disgusting or salacious, but it cracked us up. The little 50cc bike you’ll see a kiddo ride is very cool, and the racing footage from the major event is great. As compared to today’s race bikes, these classics are slow and heavy but we love them all the same. We can’t be the only ones!

Project Fat Lane Update: Tweaks and New Pieces Made On The Fairlane Before It Heads To Paint Size Matters Two Film Coming - We Have The Preview Video! Big Rig Bad-Assery