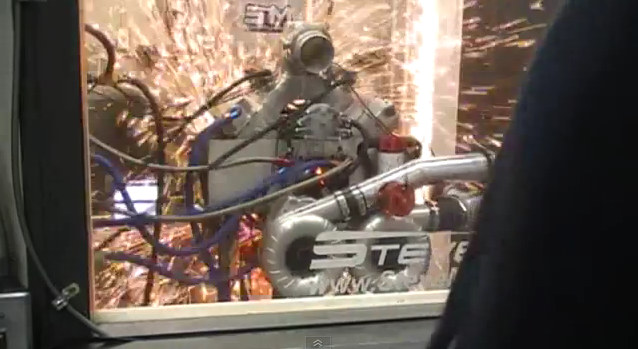 Steve Morris Racing Engines is known around the country for making stupid huge horsepower engines for drag race cars and lunatic fringe street machines. We first met Steve back in 2005 when he showed up to Drag Week V1.0 in his now signature Caprice wagon. The wagon had driveline issues and didn’t make the whole trip, but we were all left with slackened jaws from watching the car make a few full pulls down the strip. Since then, it has only gotten crazier and crazier.

In this video you will see a big block engine on the dyno. Said engine is equipped with twin ProCharger F-2 blowers and that tells us that the mill is making thousands of horsepower. We’re pretty sure this is a Chrysler big block combo of some sort on the pump and if it is a 500+ ci unit being fed by those two healthy blowers, 2,000hp ain’t beyond the realm of reason.

According to the notes under the video, the driveshaft on the dyno’s power absorption unit failed, causing the indoor pyro show. No harm done to the engine, but the silence in the dyno control room right after that sparks fly sounds a lot like a, “What the HECK was that?” moment. Whoever owns this engine now has the ultimate bragging right, “My motor broke the dyno.” Is there anything cooler to say while telling your buddies about how horrifyingly powerful your new engine is? We think not!

Press play and look out for shrapnel!