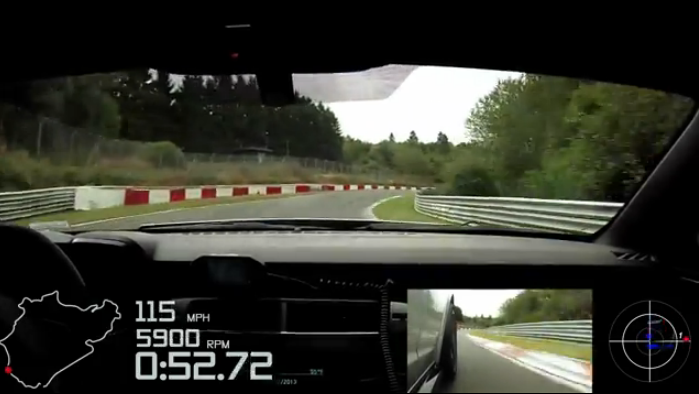 We think that it is fair to say the 2014 Camaro Z/28 is a bad ass after seeing this video of it on the famed Nurburgring in Germany. The car turned a hot lap (at points in the rain) quicker than a Lamborghini and a Porsche 911 as well as a Carrera S. That is big time stuff for a car that will cost a fraction of the price. We’re not sure how many of them will actually be driven around the ‘Ring in heated competition with German and Italian super cars, but they certainly got the point across that the Camaro is a bad mother that will hold its own against the best in the world. The Z/28 is powered by a symphonic sounding 505hp engine and has a highly tuned suspension that you’ll see hard at work over the course of this action packed eight minute video. If the Boss 302 Mustang was still around, we think that the Z/28 would certainly have something for it. Hell, maybe the Boss went away because the Z/28 was coming and it wasn’t going to be a fair fight?

It is cool to us that we have both ends of the muscular handling American car genre on the site back to back today. The Dan Gurney ‘Cuda is loud and hairy and about as refined as a Sawzall when compared to the production line Z/28 featured in this video. We’d bet dollars to donuts that this Z/28 would absolutely lay waste to that ‘Cuda or any other legit 1970s era Trans-Am car that you wanted to throw up against it. From an active suspension system to a fully tuned 505hp fuel injected engine, there’s just no comparison.

Some things to pay attention to. From roughly 6:00 on, the driver is contending with a rain storm and wet asphalt. Call us weird if you want, but we were hella impressed that the wipers stayed planted to the windshield at super high speeds on the track. Also, the driver certainly had confidence in the car and himself because he didn’t miss much of a beat when racing through the rain storm and finishing the lap on wet asphalt. The man and the machine proved themselves very capable here.

We’re not sure what else to say other than this video rules and it will probably help Chevy move a few Z/28s, not that we think they’d need a ton of help. The price on these babies will be steep, but there will be a line (at least initially) waiting to snatch them up once production and dealer deliveries begin. After hearing how it sounds and seeing how it works, we want one!

Drag Action Gallery: The 2013 Drag Bash At Knoxville Dragway! Early Pro Mod Stars On The Strip! Our Final Blast Of Photos From Day Of The Drags 2013 - Dig It!

15 thoughts on “Watch The 2014 Camaro Z/28 Attack The Nurburgring In High Definition Video!”