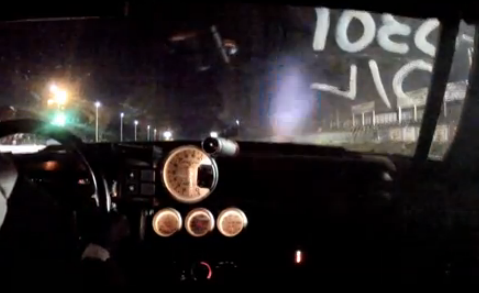 This is one nasty little car! Packing a 331ci Ford small block based off of a Ford Racing Boss block, an 88mm turbo, AFR 205cc heads, FAST XFI fuel injection and most importantly a beefed up T56 stick box, this Mustang is believed to be the quickest “true” stick shift car on the planet. What do we mean by it being a “true” stick shift car? It is shifted by operating the clutch, it is not a planetary style transmission, it is not a full race box like a Liberty, G-Force, or similar, and it is an OEM production based unit. As you will see in the video, the driver is very slow and deliberate with the shifts. Why is he not BangShifting this thing? Mainly because blowing the thing up was not a planned part of the exercise. We’re sure the dude could have been quicker on the gear changes but the cost of either ripping the handle or just fanning the clutch when the stick was pulled could have been a major failure and no (believed) world record.

Shift style aside, this car is completely nuts and in the video you’ll see the two runs from both the inside and outside of the car. While it is impressive to watch from the outside, the in-car video is 100% BangShift approved. The exhaust is vented straight up through the hood so during the night run you’ll see fire and all kinds of good stuff shooting up in the air. The unrelenting wall of acceleration is impressive to watch. As the driver makes the gear changes the car pulls up to the limiter in each cog and it had to have been a heck of a ride for the pilot. He needs to do some driving as well. The car has a reasonably small tire on the back of it and when the boost comes up it wants to roast those babies in each gear.

This is an impressive car. The runs were made at the widely known Mission Raceway Park. Mission is a bad fast track with great traction and insane mineshaft air at this time of the year due to its proximity to sea level. The track literally borders a huge river. There have been lots of records set at Mission, including this one!

Hotchkis Is Bringing The Famous Bullit Car Chase To Life At SEMA Tickets Are Going Fast! Get Your Tickets Now For The Optima Ultimate Street Car Invitational November 9th

19 thoughts on “Watch The World’s Quickest True Stick Shift Mustang Rip Off 8-Second ETs – A Mean Piece For Sure! (Video)”